It seems like such a simple question, right? What is the best small SUV? Really, we’d love to provide a simple answer. Buy the _______!

Unfortunately, it’s just not that simple, though we’ll at least do our best to make it less complicated. First, like most folks, we’re defining “SUV” to basically be synonymous with “crossover.” We could go into the differences and definitions of those terms, but we doubt you care, so we’ll just move on.

Second, it’s important to ask how small do you want your small SUV to be? The number of choices has exploded in recent years with many long-standing models growing in size while many new, smaller options debuted. This basically leaves us with three sizes of small SUV: compact, subcompact and the newest growing sub-segment that fits in between them. It doesn’t really have a universally accepted name yet, so we’re calling it the in-betweener small SUV segment.

OK, now with the housekeeping out of the way, let’s provide some answers to what are the best small SUVs, including what they’re especially good at and what they could do better. Hopefully this will be a helpful place to start your research. All are listed in alphabetical order. 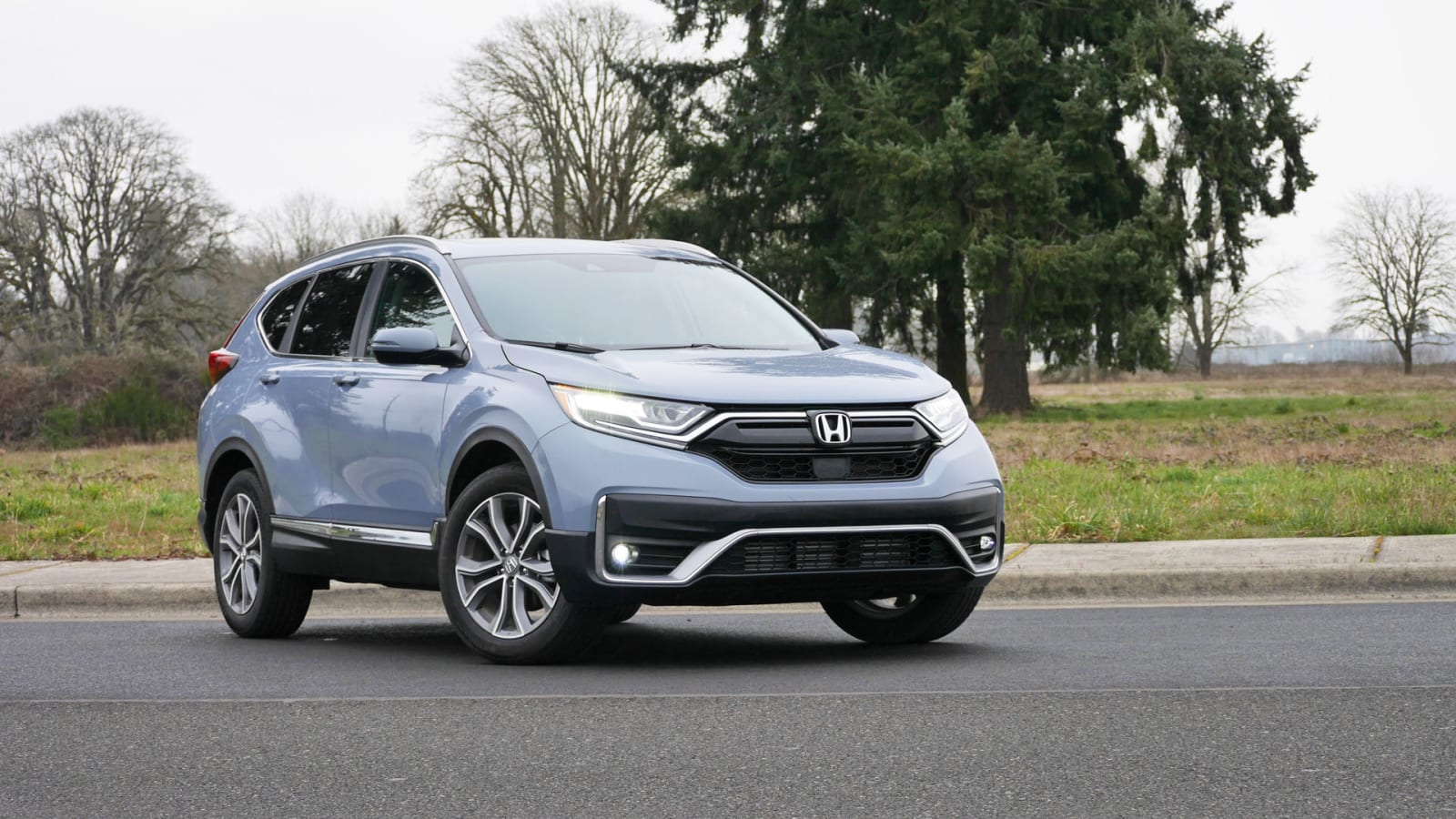 Why it stands out: Best-in-class space, strong-yet-efficient base engine, available hybrid, middle lower LATCH anchor
Could be better: Antiquated and glitchy tech interface, a bit dull

Consider the CR-V the baseline for any compact SUV search. Objectively speaking, it’s tough to beat due to its massive cargo capacity, voluminous back seat, strong-yet-efficient engines (including the CR-V Hybrid), well-balanced driving dynamics, competitive pricing and features, strong safety ratings and well-regarded reliability. It’s easy to see why it continues to be such a best-seller: for the vast majority of compact SUV buyers, and especially families, it checks every box. Of course, people don’t make buying decisions based solely on objective criteria, so you may find it dull to look at or drive, be frustrated by its tech interface, or some other reason only you can think of. That’s why other choices exist, including the next pair of small SUVs that may satisfy those subjective wants a little better. 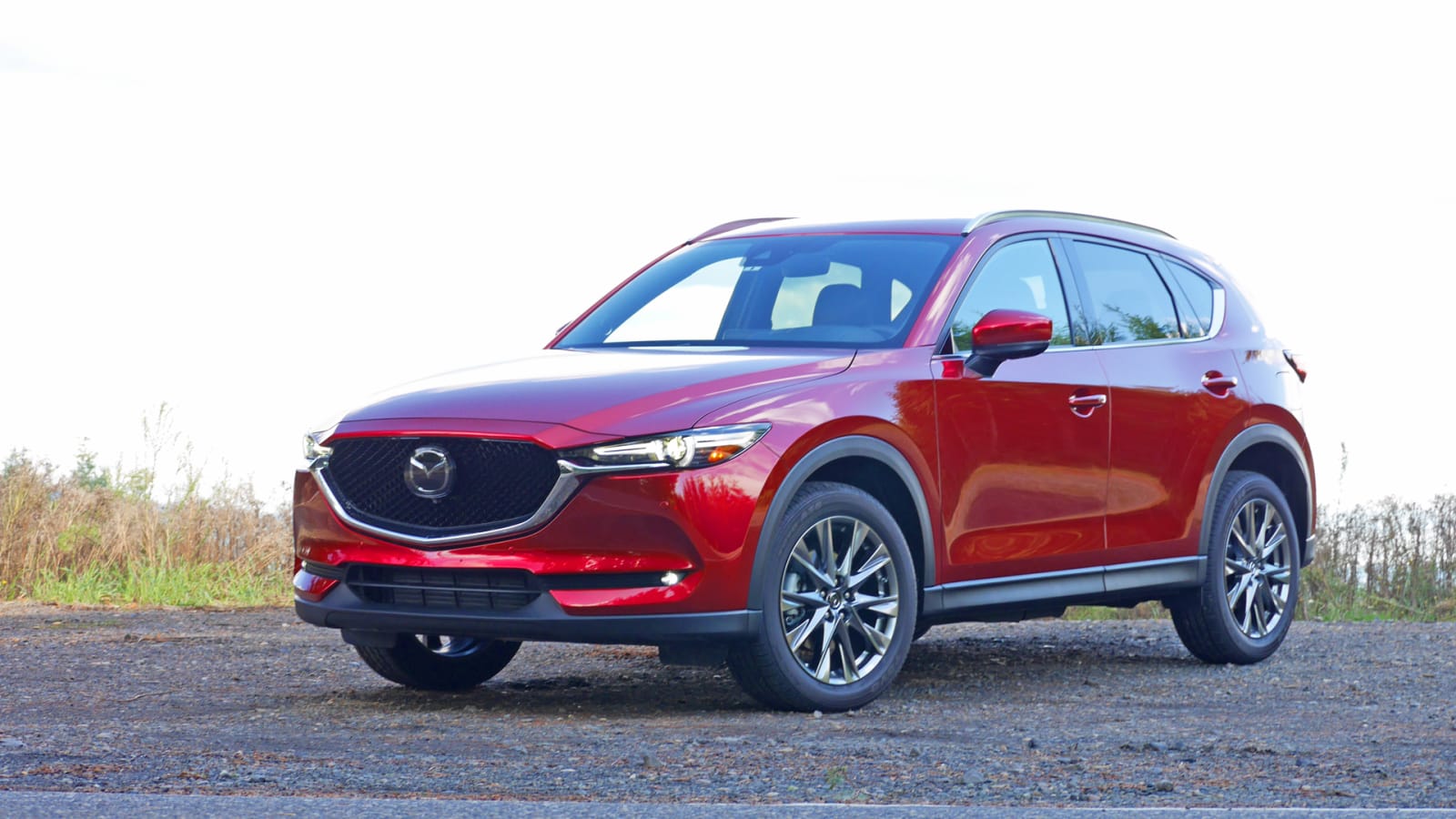 Why it stands out: Budget Porsche driving experience; luxurious cabin; powerful turbo engine upgrade
Could be better: Less cargo, passenger and storage space; non-touchscreen infotainment won’t be for everyone

Basically, the CX-5 delivers in areas where the CR-V falls short: style and driving fun. However, it can also be considered an alternative to luxury compact SUVs. It all starts with its elegantly sporty styling and carries inside where its handsome design and plush materials are a clear step up from others at its price point. Then, when you’re behind the wheel, the CX-5 impresses with engaging driving manners that we’ve routinely described as being indicative of a “budget Porsche.” Furthermore, its available turbocharged engine even has as much or more power as several similarly sized luxury models. Now, it doesn’t have as much passenger or cargo space as the CR-V or RAV4, so it won’t be for everyone, but it should definitely be considered. 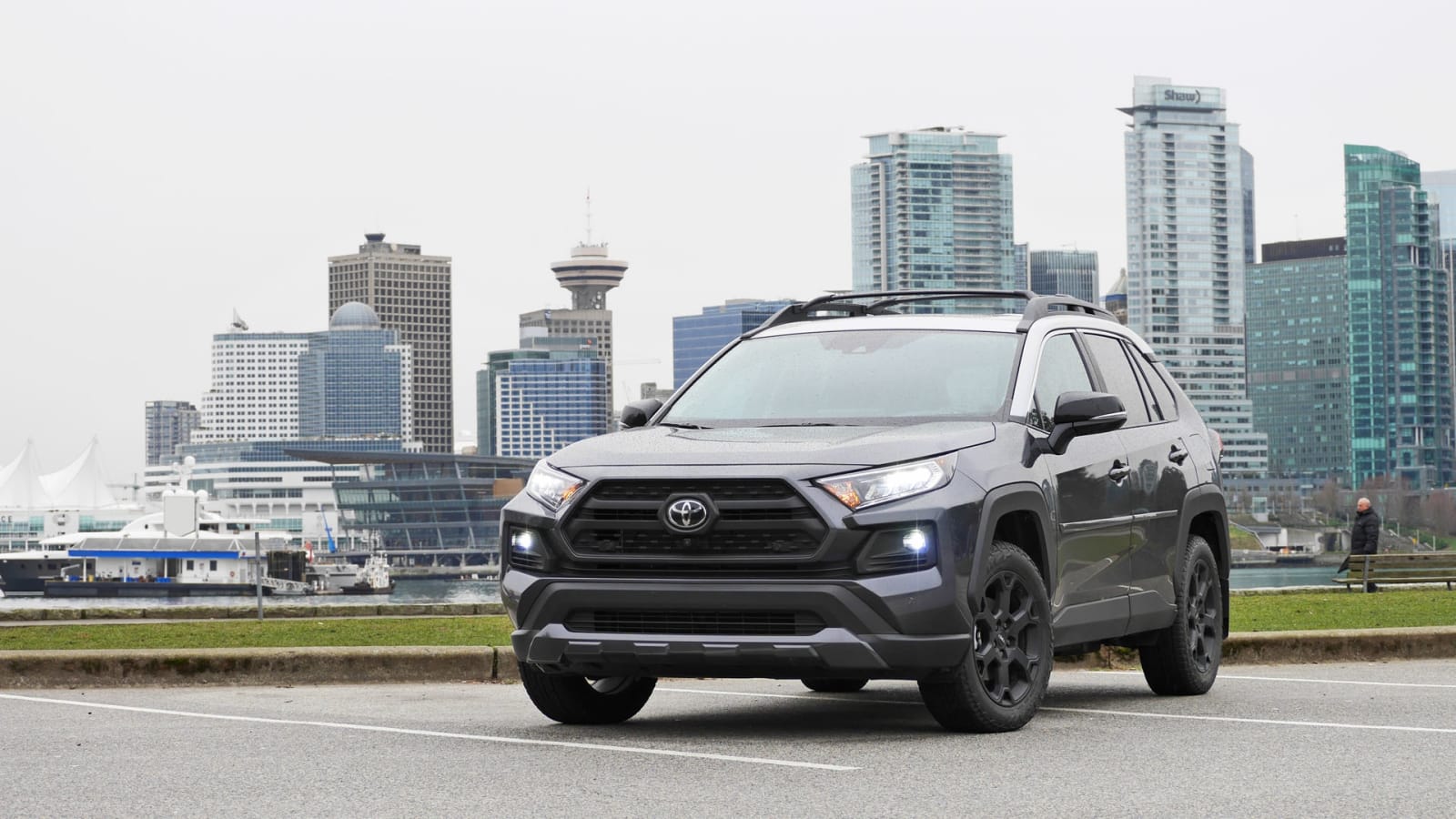 Why it stands out: Unmatched variety of models including two hybrids; spacious back seat and cargo area; reliability
Could be better: Unrefined base engine; antiquated tech interface

The RAV4 has more passenger and cargo space than most. It’s comfortable and surprisingly responsive to drive. Its interior is well built with quality materials, and offers user-friendly controls and abundant storage. Its resale value and reliability should be better than almost anything on the road. Those are all the basics that the RAV4 nails, but the latest version really stands out by offering an unparalleled variety of models. From the run-of-the-mill RAV4 LE or XLE you can go in different directions toward the more rugged Adventure and TRD Off-Road models, or toward the sporty XSE Hybrid and Prime. And those latter two are particularly significant, as the RAV4 is the rare small SUV that’s not only available as a hybrid, but as plug-in hybrid (Prime) as well. The Ford Escape is the only other. We like that there’s a little something for everyone with the RAV4. 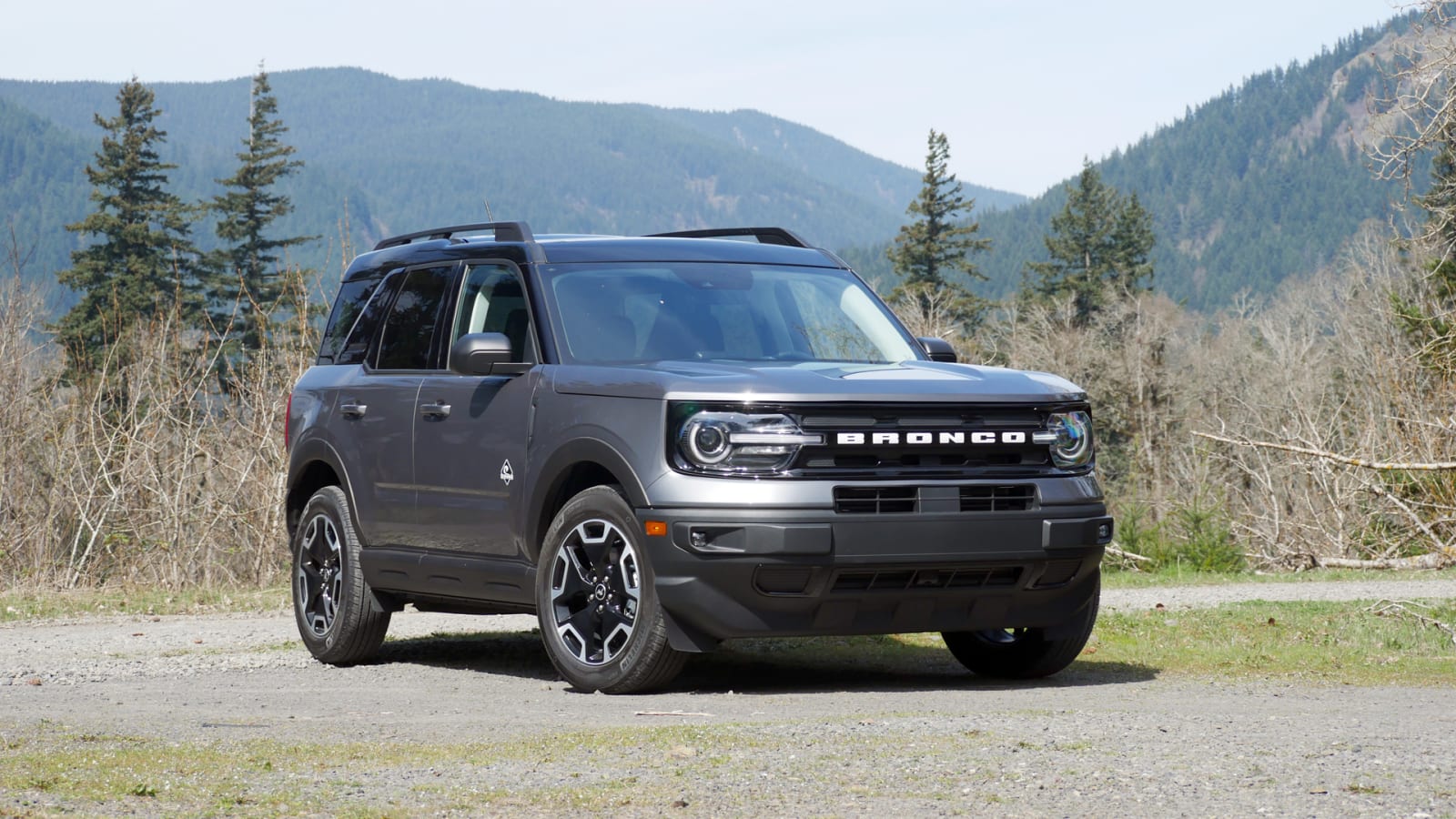 Although its exterior dimensions and back seat space fall in between the compact and subcompact segments, one of the great things about the new Bronco Sport is that it actually has as much or more cargo space than models that are considerably bigger on the outside. So it can hold a lot of stuff for a weekend away, but the “Baby Bronco” does so much more for those looking for something a little more Swiss Army Knife than the typical small SUV. There are numerous clever features throughout, like zippered map pockets and campsite lighting in the liftgate, plus a vast accessory catalog. Every version is much better than usual off-road (though the Badlands is definitely the one to get for those going further afield) with its standard all-wheel drive, ample ground clearance and “G.O.A.T. Modes” that set the vehicle for a variety of road and terrain conditions. It’s also impossible to ignore the Bronco Sport’s distinctive style inside and out, plus a driving experience that’s a bit more SUV-ish … and in this case, we do mean that in the traditional, body-on-frame truck-based SUV way. 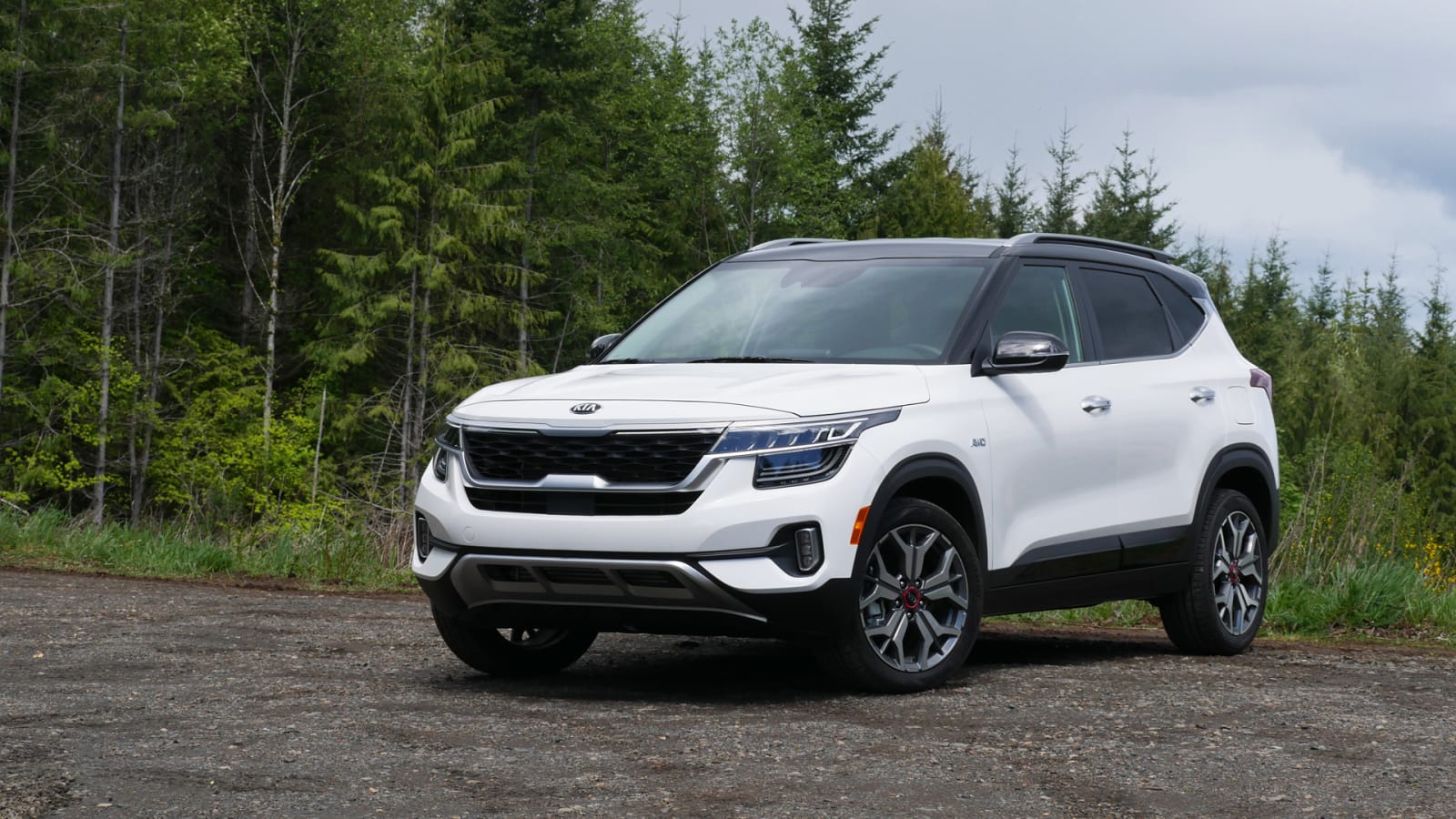 Why it stands out: Surprising space; acceleration from Turbo models; user-friendly tech; distinct design details
Could be better: Some cheap interior bits

The surprisingly good Seltos proves you don’t have to spend a lot of money for both function and fashion. Its price and exterior dimensions fall in between the subcompact and compact SUV segments, yet it boasts more interior volume than is expected and an abundance of special design details throughout that successfully counter some of the cheaper bits applied to keep the price down. It also looks pretty good, and the available turbocharged engine produces shocking acceleration for this segment. Basically, it provides even more value beyond Kia’s usual extra-long features list and warranty. Like the Bronco Sport and CX-30, we’d actually consider the Seltos before many of the compact SUVs that didn’t make the cut above. 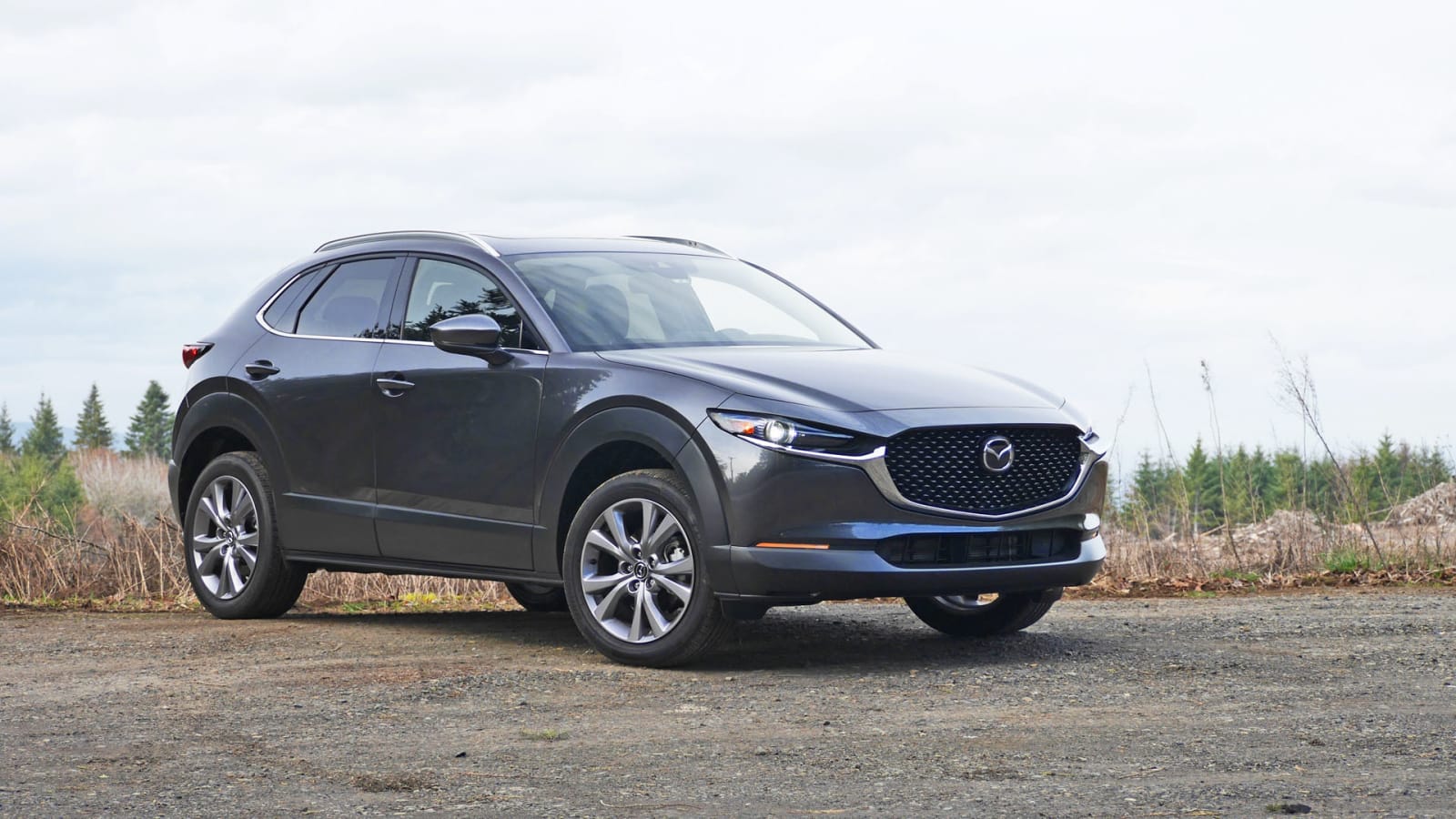 Why it stands out: Luxurious interior; best-in-class driving dynamics
Could be better: Interior space is more hatchback than SUV; those plastic fender flares have to go

If the Bronco Sport provides ruggedness and versatility, and the Seltos value and style, the Mazda CX-30 provides driving fun and luxury. We actually consider it a smarter buy than luxury subcompacts like the BMW X2 and Audi Q3, and not just because of its lower price. Its interior doesn’t really give up anything to them in terms of luxury or features, and it can actually be more engaging to drive, especially with the new-for-2021 turbo engine. Despite all this luxury talk, though, the CX-30 price still starts in the low $20,000s, and only barely crests $30,000 when fully loaded. Basically, it’s a bargain without looking or driving like one. 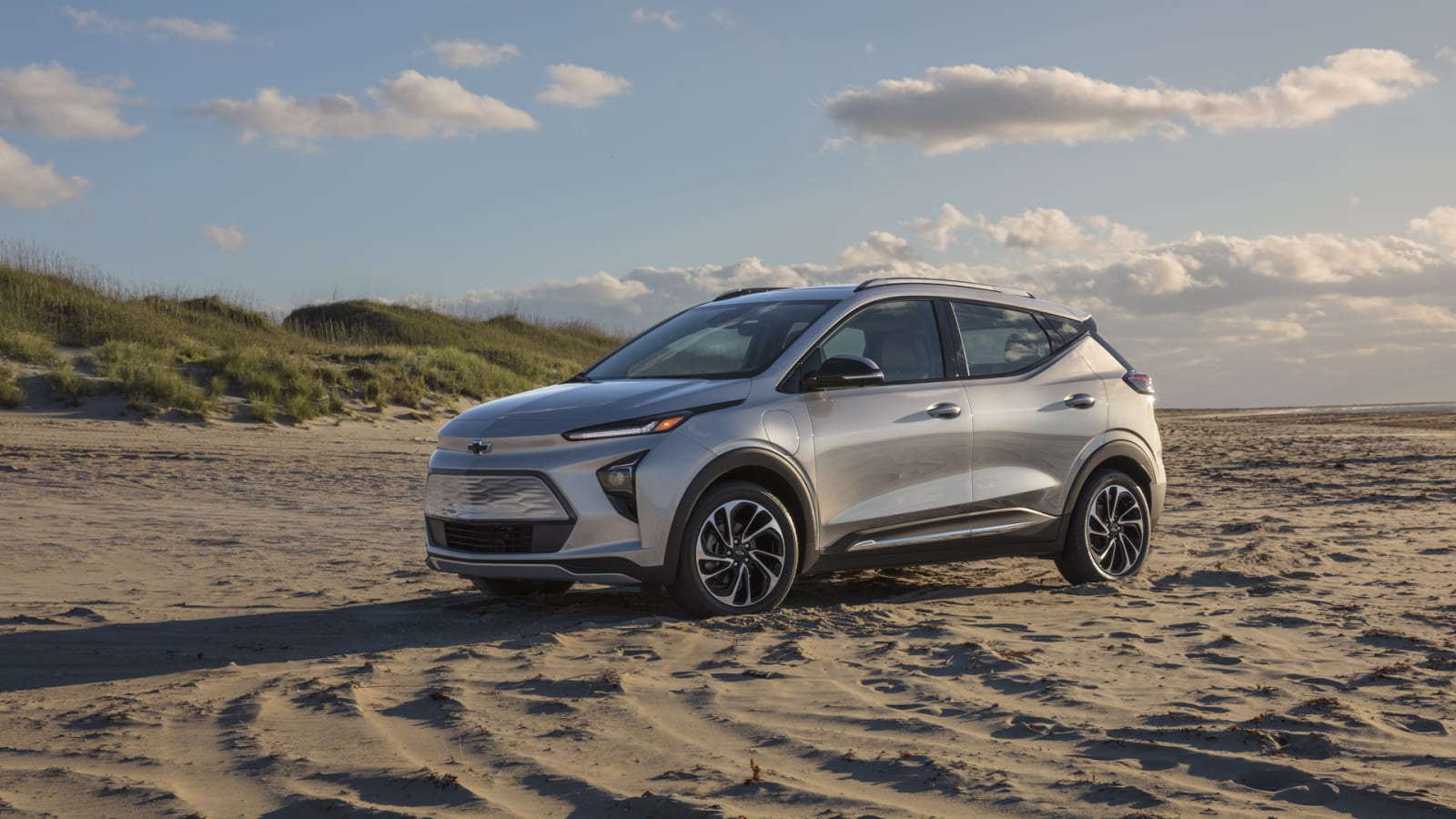 Why it stands out: 250 miles of electric range; usable back seat; rapid acceleration; low price for an EV
Could be better: High price for a small SUV; small cargo area

The all-electric Bolt EUV is new for 2021. The U in its name indicates it’s more of an SUV than the existing Chevy Bolt, but the differences really only amount to a considerably enlarged back seat and more squared off, SUV-like styling. Whatever, the Bolt EUV is a compelling electric car in a small SUV wrapper that will go 250 miles on a charge and delivers acceleration that’ll blow the doors off everything else in this size segment. It’s enjoyable to drive, well-equipped and decent to look at. It also offers hands-free driving with GM’s updated Super Cruise advanced driver assist system. The starting price of $33,995 is hefty compared to the other small SUVs here, but don’t forget the hundreds to thousands of dollars per year you’ll be saving by not buying gasoline and that maintaining an electric car is cheaper long-term. 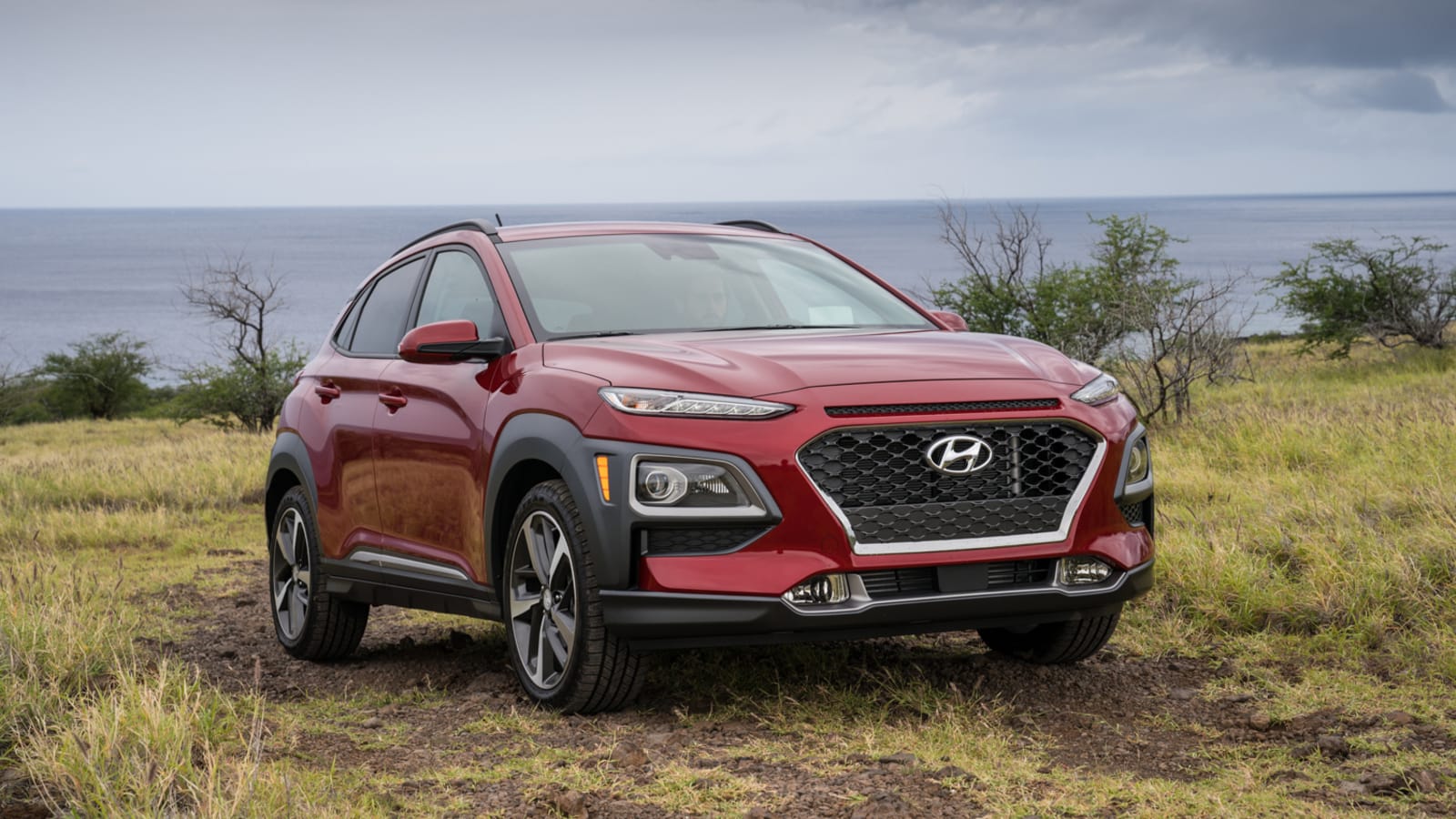 Why it stands out: Fun to drive; easy-to-use tech; powerful turbo engine upgrade; 258-mile EV option
Could be better: Small back seat and cargo area; the EV looks pretty weird

The Kona continues to prove that a subcompact SUV can be fun to drive. It’s certainly not the most spacious model, but its sharp handling, distinctive styling and attractive cabin with user-friendly tech help it stand out from the crowd. Oh, and that’s not even mentioning what’s under the hood. The base four-cylinder is perfectly competitive, but the Kona offers two other distinctive choices: a 175-horsepower turbo engine that actually gets better fuel economy and an all-electric version that outdoes the Bolt EUV’s range with 258 miles. Note that the Kona will be significantly updated for 2022, including with new styling and the addition of a sporty Kona N Line. Why it stands out: Ample space and abundant features for the money; unique style; strong turbo engine upgrade
Could be better: All-wheel drive is not available

The Kia Soul definitely didn’t start off as a small SUV, and the term “crossover” is probably better applied to it. Still, what started life as an undefinable funky tall hatchback now finds itself in its third generation with numerous vehicles of similar shape and size that are dubbed “small SUV” or “small crossover.” If it walks like a duck and quacks like a duck … Call it what you will, but the Soul delivers the goods with tons of equipment and space for its price and size, an agreeable driving demeanor, and an even more powerful engine upgrade than the Kona’s. We also think it’s pretty cool. All of the above helped it win our subcompact SUV comparison test. Now, if there’s one area where the Soul does not satisfy a typical SUV requirement, it’s the lack of available all-wheel drive. That there are more such vehicles in the segment, including our next entry, only seems to further secure the Soul’s membership into the club. 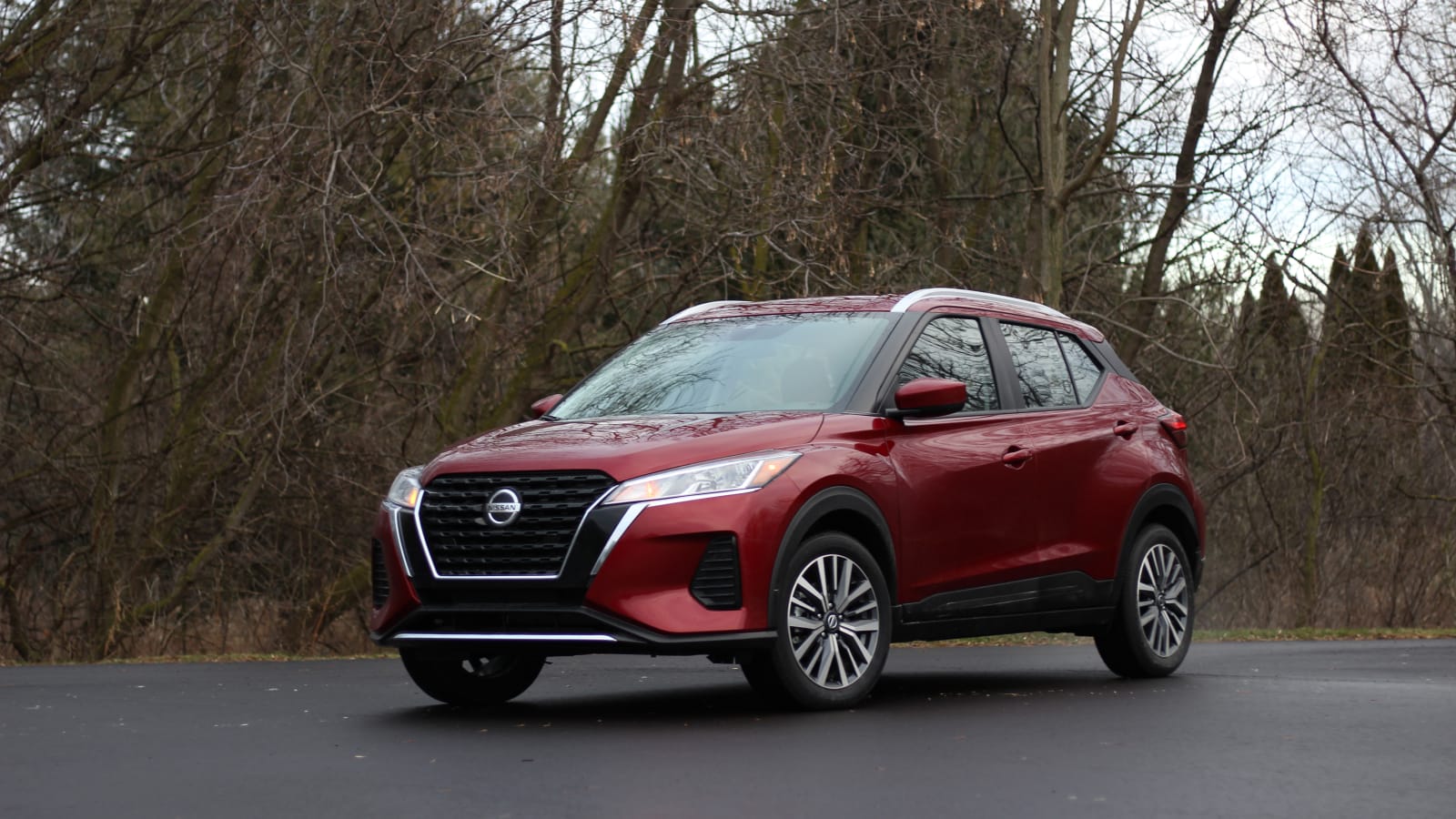 Why it stands out: Tons of space and features for a low price; best-in-class fuel economy; well-executed safety tech
Could be better: It’s really slow

We wouldn’t blame you for not getting excited about the Kicks. It doesn’t have much horsepower, it’s not exactly fun to drive, and its tall hatchback body is still pretty gawky despite an attractive styling update for 2021. That said, the Kicks does a really great job at the basics. It supplies a massive amount of space for a vehicle its size, comes with a wealth of safety features for a vehicle with its modest price, and doesn’t feel like a penalty box to sit in or drive. The interior is handsome and well-equipped with impressive materials in upper trim levels. For those seeking an efficient, inexpensive urban runabout that can swallow enough stuff for a weekend getaway, it just makes a lot of sense. 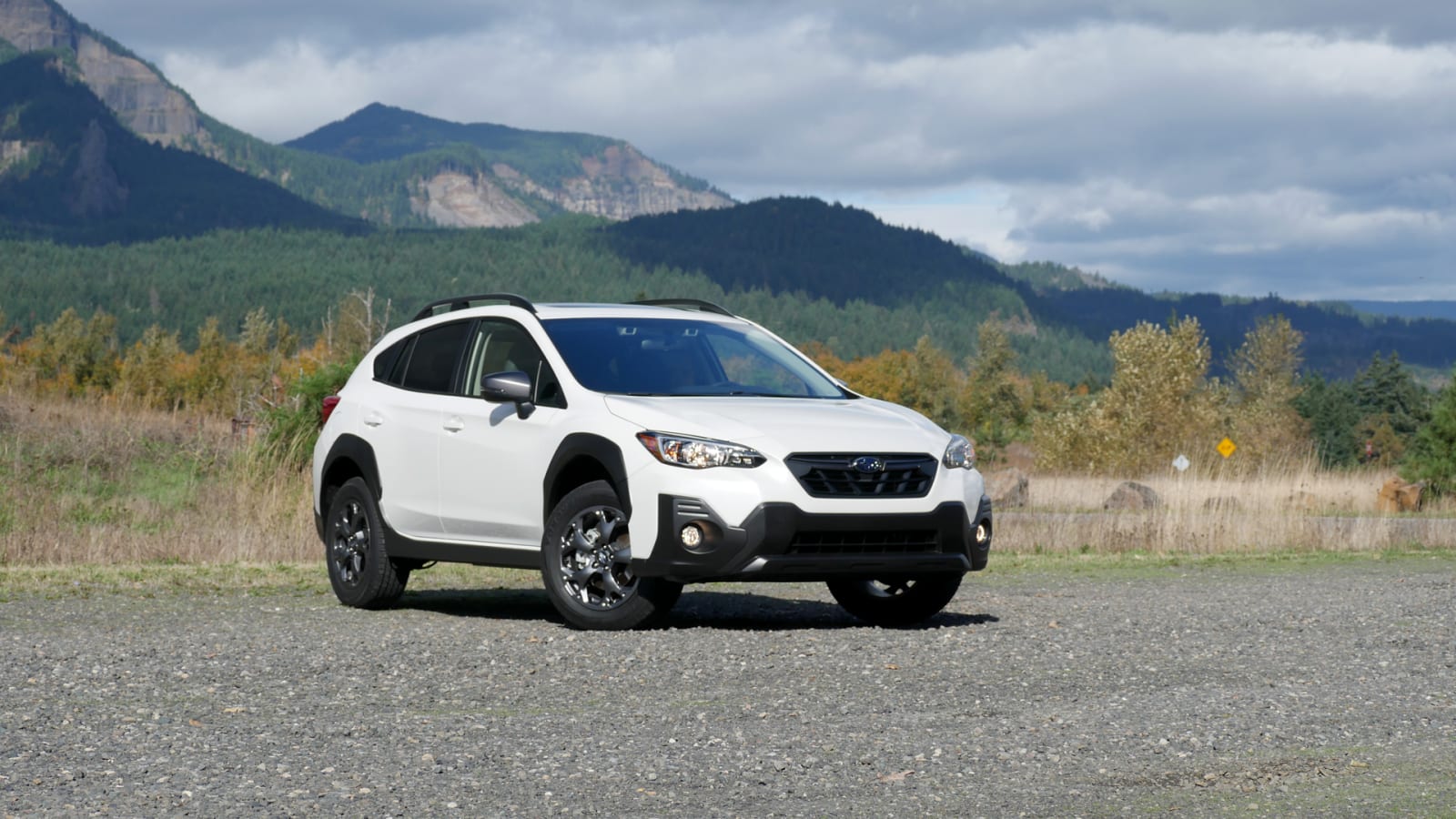 The Crosstrek proves just how all over the place this segment is. It’s basically just an Impreza hatchback with some styling tweaks and a massive lift (its 8.7 inches of ground clearance is way more than most crossovers), but that’s actually good enough to better many vehicles that were built from scratch to be a small SUV. Besides that ground clearance, the Crosstrek has become a darling of the outdoor adventure set for its manageable size, easy-to-use interior, sturdy and easily reached roof rails and a comfort-oriented driving experience that serves it well on longer drives. That it finally offers a more powerful engine option for 2021 satisfies a long-held complaint among owners that the base engine was just too darn slow.

You can find more SUV reviews by Autoblog here