ROSAMOND, Calif. – Chuck Yeager’s Bell X-1 busted the sound barrier back in 1947, inspiring a generation of speed freaks that anything is possible with a can-do spirit and the right hardware. However, it wasn’t until 1969 that the supersonic maiden flight of the Concorde put faster-than-sound travel within reach of civilians. The same year, the first Ford Mustang Mach 1 was dropped into the hands of drivers, who promptly set no fewer than 295 speed and endurance records at the Bonneville Salt Flats. The round-eyed Pony car continued its streak, earning back-to-back SCCA championships in 1969 and 1970, making it a legitimate race car that brought power to the people.

Fast forward to 2021. Between the Challenger Hellcats, Camaro ZL1s, and top-dog Mustangs, there’s never been rawer, more affordable horsepower available to the general public. Reviving the Mach 1 name for the first time in 17 years, Ford slots the new $53,915 fastback below the monstruous Shelby GT500, whose supercharged 5.2-liter V8 churns an eye-watering 760 horsepower. Positioned as the pinnacle of the 5.0-liter lineup, the Mach 1 costs 72% of the GT500 price and provides 63% of the horsepower. But the new Mach 1 is arguably closer in spirit to the O.G. muscle car than the mind-melting Shelby. You can take it to the track, but it won’t be taking on supercars while there.

With that more attainable performance goal in mind, we climbed into an aggressively optioned 2021 Ford Mustang Mach 1 at the Streets of Willow circuit to find out if this pumped-up road car was truly track worthy. Essentially the 5.0-liter found in the dearly departed Mustang Bullitt with a few parts from the also-dearly departed Shelby GT350, the Mach 1’s 480-horsepower V8 has a husky presence, rumbling its naturally aspirated song with a soothing bass note and outstanding flexibility.

Opt for the six-speed manual, a Tremec 3160 unit, and you get a nostalgic white cue ball short-throw shifter mated to a GT clutch. The manual gets a number of features intended to make it a whippersnapper on track, including rev-matched downshifts and a flat-foot feature that enables the accelerator to remain floored between shifts. More on that later. The two-pedal setup incorporates Ford’s widely used 10-speed SelectShift auto, which uses an upgraded torque converter, a second oil cooler for 75%  better cooling, and Mach 1-specific calibration.

Mat the throttle in the manual, and the Mach 1 blasts ahead with a blat and buck, pressing you into its bucket Recaros with a satisfying shove. Ford engineers say the perforated exhaust tips remove some of the high frequency noise, with the goal being “barely legal” in the most stringent global markets of Australia, Brazil and Germany.

Tracking any car for the first time requires a learning curve, but the Mach 1 is a startlingly quick study: Just a couple turns into the technical corners at Streets of Willow, and I found myself pushing the Mustang harder and faster than most cars I’ve spent many laps in. Equipped with the Handling Package, the Mach 1 attacks corners with sharp turn-in and outstanding grip from the Michelin Pilot Sport Cup 2 tires that wrap around wider 19-inch wheels. The setup adds more aggressive aero for downforce and a bolt-in Gurney flap that can be removed, along with a 7-mm lower front and 6-mm rear end; the automatic sits another 2mm lower. The standard Mach 1 claims 22% more downforce than a Performance Pack Level 1-equipped GT, and 150% more with the Handling Package. Along with already stiffer sway bars and front springs, stiffer rear subframe bushings and a GT500-sourced rear toe-link, the Handling Package enables user-adjustable wheel camber settings. Our testers were dialed in with -2.5 mm at the front and -1.5 mm at the rear, which yielded prodigious grip during high-G cornering.

It takes some getting used to holding the throttle down in between shifts. Every ounce of your mechanical empathy pleads to you to do otherwise. But once accustomed to the no-lift feature, which only works above 5,000 rpm, the Mach 1 manual is a riot to wind up to its indicated 7,400-rpm redline and speed shift into the next gear. The shifter throw is short and tight but precise, and there’s a reassuring accuracy to the naturally aspirated V8’s throttle response. The Performance Package’s six-piston Brembo brakes scrub off speed quickly, rounding out the Mach 1’s capabilities nicely. In Track mode, the available and recommended MagneRide damping system stiffens up the suspension enough to make this Mustang feel buttoned down and agile, ready for the most technical corners of this 1.6-mile circuit.

The 10-speed automatic delivers quite a different experience for the driver, running through more gearshifts but doing so quickly enough that it never seems redundant. For instance, barreling downhill between turns 3 and 4 catches you right in between second and third gears in the manual, requiring an upshift followed by a quick downshift. Tackle the same stretch in the auto, and the swaps between third and fourth gears happen so quickly that it feels like virtually no time is lost in the process. The 10-speed auto doesn’t shift with the seamlessness of the seven-speed dual-clutch found in the GT500, sometimes producing brief blips during rev-matched downshifts. Its wheel-mounted plastic paddles also don’t offer the same mechanical satisfaction of rowing your own gears. However, it is an efficient and effective tool on the race track, enabling the Mach 1 to keep pace with some of the most potent road cars available on the market today. 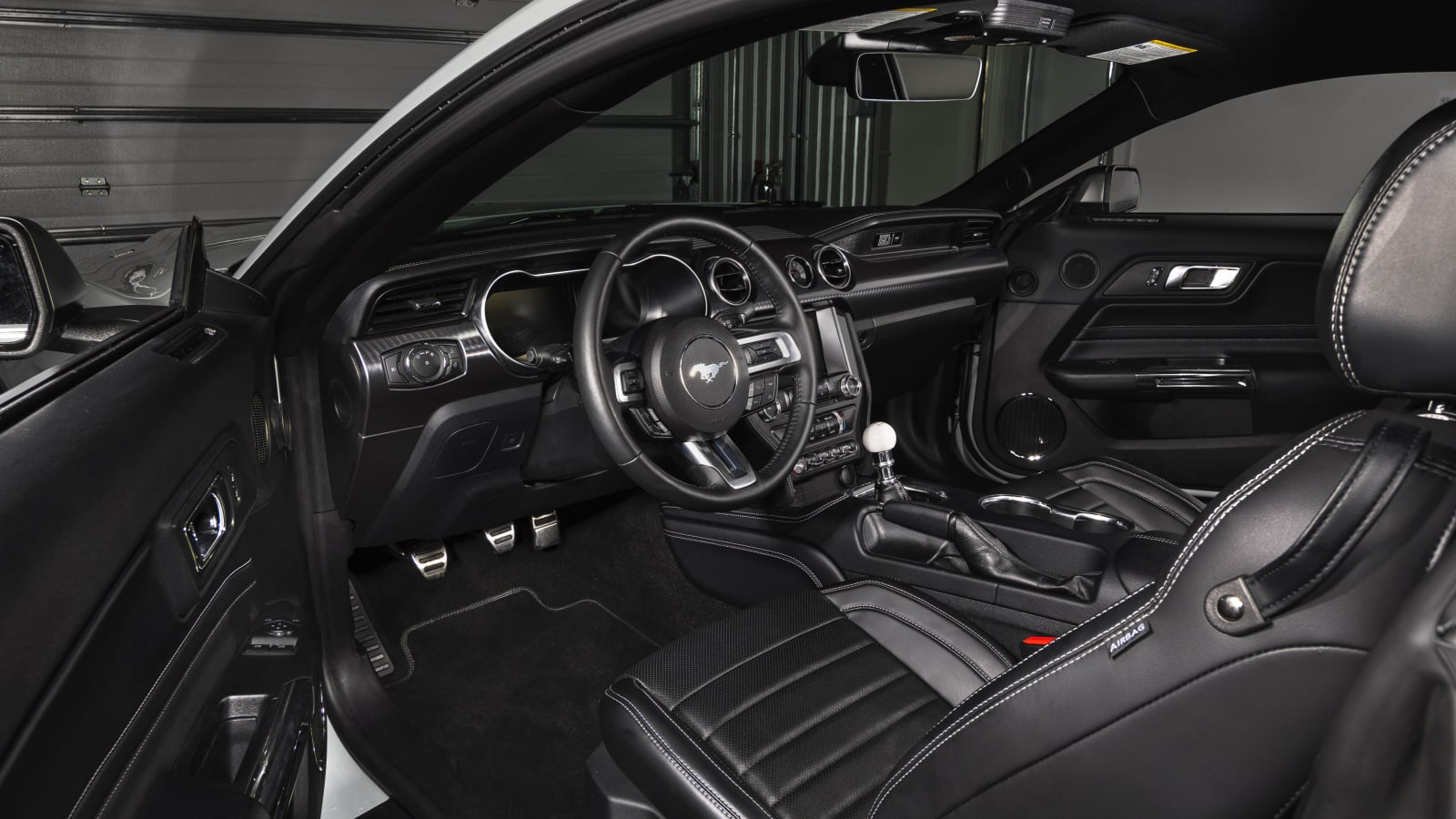 Driving a Mach 1 on public roads without the Handling Package delivers a noticeably different feeling behind the wheel. The V8’s tasty rumble is still there, as is the gusty shove of its 420 pound-feet of torque, which peak at 4,600 rpm. But the steering turn-in feel is a tad softer with Michelin Pilot 4Ss under foot, and the cornering dynamics cushier, offering a more grand-touring feel than the track-capable sharpness of the handling package. Dial the drive mode to Tour, and the MagneRide suspension still feels buttoned-down but more compliant than with the stiffer-riding Handling Package. There’s still plenty of power under the hood to get you into trouble, but the Mach 1 also feels solidly built and comfortable enough for long-distance drives, enabling it to encroach on the usability of the GT model slotted below it, while also stretching its legs enough to feel truly at home on the track.

While the GT is the volume seller that will fill most garages and the Shelby GT500 the low-volume outlier that battles supercars costing several times more, the Mach 1 offers a powerful, sharp-handling middle ground that is anything but. It doesn’t earn the ultimate superlatives of being the quickest or fastest, but the Mach 1 achieves stirring amounts of performance that harken back to the glory days when a bold few broke barriers and achieved the unthinkable. At the end of the day, this is still just a loud and fast muscle car. But in these times when internal combustion is rapidly being replaced by electrification, cars like the Mustang Mach 1 also mean more now than ever.