CHELSEA, Mich. — As I’m bouncing this big, three-row Jeep over boulders while fording water, I can’t help but think back to my childhood. My sister, cousins and I all learned to drive on terrain similar to this in a 1946 Jeep CJ-2A. It wasn’t usually quite as hairy as what we’d get into at Grandpa’s ranch, but this trail was still designed to evaluate Wranglers for off-roadworthiness at the automaker’s Chelsea Proving Grounds. And the 2021 Jeep Grand Cherokee L is a far cry from that old Army-copy Willys. But despite the swish leather, forward camera feed and actual roof of this 75-years-younger Jeep, the experience is familiar on an elemental level.

If you were concerned that Jeep was running astray of its identity as it moves into a future of more family-friendly and electrified SUVs, fret not. This new Grand Cherokee is a Jeep through and through. It’s just really posh in its upper trims, and much more comfortable to drive and be driven in than what we’re used to. That’s a good thing.

Jeep pulled off this weight savings through engineering. Tom Seel, vehicle line executive for the Jeep Grand Cherokee L explains that his team optimized out 175 pounds of weight in this new three-row. Part choices like cast aluminum shock towers and extruded aluminum cross bars, plus techniques like mounting the engine to the front axle not only reduced weight but result in a more controlled, quiet ride as well. The Grand Cherokee L also uses a lot of high-strength steel for body rigidity — leaving less than 29% mild steel in the vehicle.

On the outside, the L definitely looks bigger than the regular Grand Cherokee (duh) but the proportions are all still agreeable. The glasshouse looks huge, with a lowered beltline and the curved windshield bulging out ahead of the A-pillars. One’s eyes can’t help but be drawn to the traditional seven-slot grille, which in the instance of the L is canted forward, reminiscent of the Wagoneer my dad drove when I was wee. I was skeptical of this touch when the L was first revealed, but I must admit it’s quite comely in person. All trims have full LED lighting, while the Summit grade offers an available black roof, as well as a 21-inch wheel package. 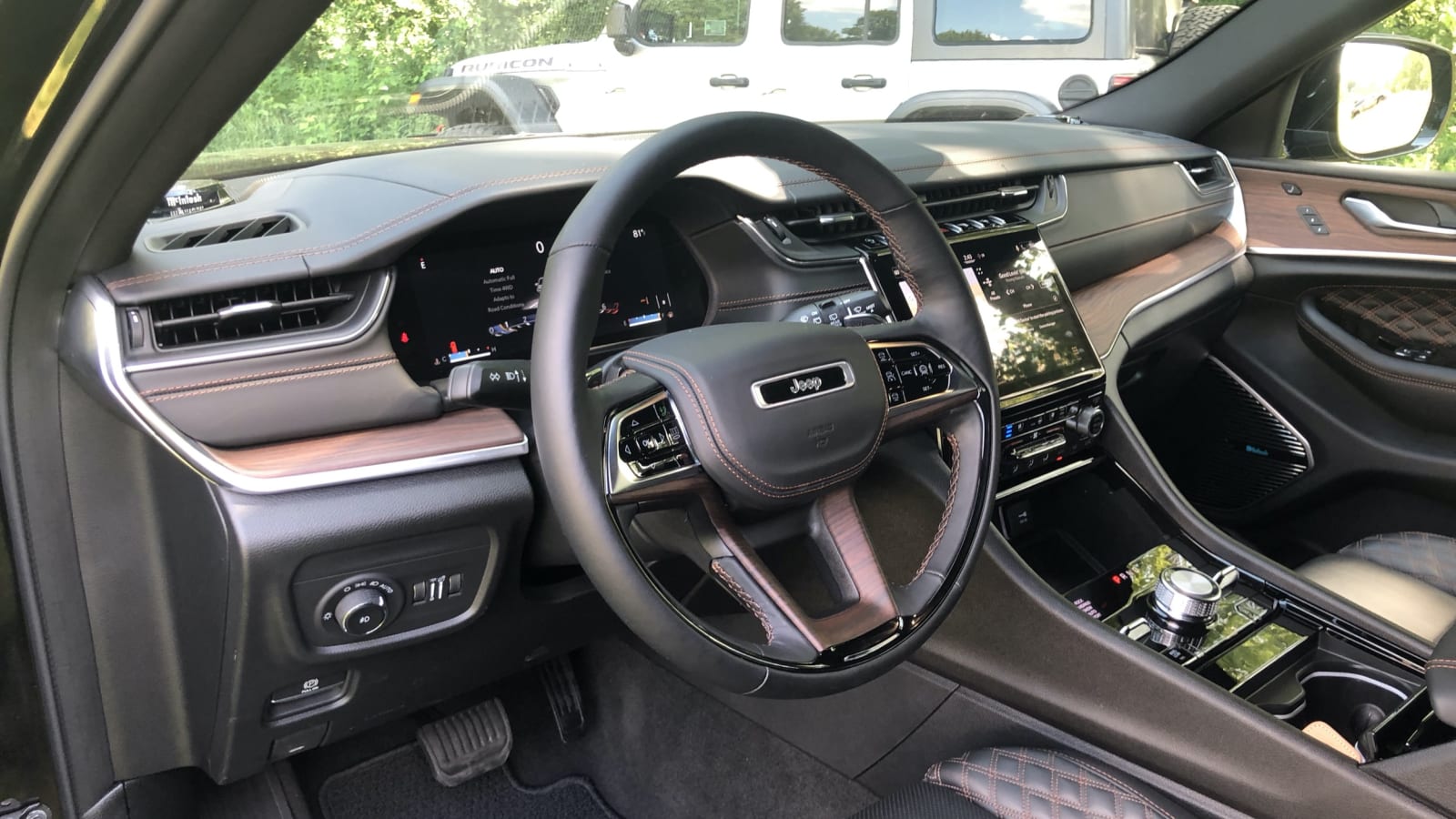 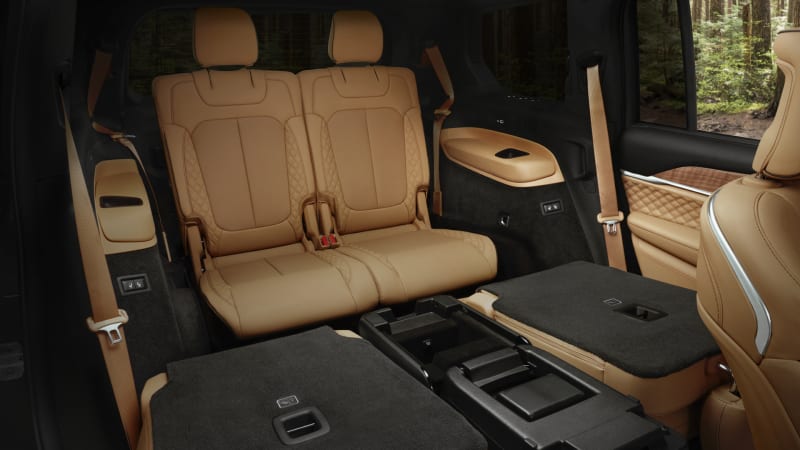 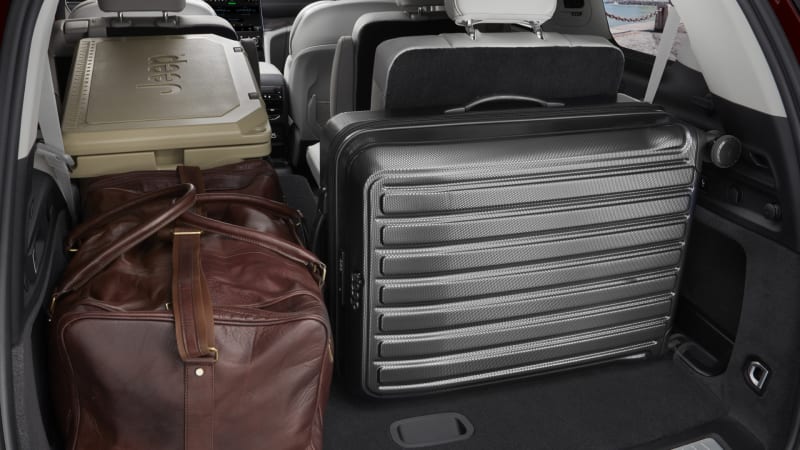 Inside the higher trims, the interior feels downright premium. The Summit Reserve package is particularly impressive, with quilted leather, genuine open-pore waxed walnut trim and a microfiber headliner. Every material looks and feels substantial, every detail feels intentional and different surfaces have their own unique feel, like the smoothness of the leather, suppleness of the wood, the cool weight of the scalloped metal on the rotary gear selector. It’s all just so sensual … but in that rugged, exclusive hunting lodge sort of way that feels appropriate for the Jeep brand.

Of course, it wouldn’t be a true Jeep without off-road chops, and the Grand Cherokee L offers it at various levels. All 4×4 versions feature an active transfer case that can manage torque among the axles, as well as five different terrain modes (Auto, Sport, Rock, Snow and Mud/Sand). The basic Quadra-Trac I is a full-time four-wheel-drive, single-speed unit, and is standard in the Laredo and Limited trims. It’s capable of moving up to 100% of torque to either axle when it detects or predicts slippage. The Overland model comes standard with the Quadra-Trac II two-speed transfer case, which features a 2.72:1 low-range gear ratio. Optional in Overland and standard in Summit is the Quadra-Drive II, which adds an electronic rear limited-slip differential. Hill-descent control is standard in Overland and Summit, and works in both forward and reverse.

Additionally, Overland and Summit trims get Jeep’s Quadra-Lift air suspension with the ability to automatically or manually adjust the ride height. It can lower it from its normal 8.3 inches of clearance to improve aerodynamics or ease ingress and egress when parked, or it can raise it up to a height of 10.9 inches for clearing off-road obstacles or fording water depths up to 24 inches. At full stretch, the Jeep Grand Cherokee L boasts an approach angle of 30.1 degrees, a departure angle of 23.6 degrees and a breakover angle of 22.6 degrees. The suspension features a closed-loop air system with two tanks below the rear seat and cargo area.

“For a Jeep that goes off-road in dusty environments — all kinds of environments — to have an open-air system really isn’t practical for the longevity of the vehicle,” Seel said. “So we chose a closed-loop system, but we added quick-down leveling this year,” which allows the suspension to drop 1.8 inches in 7 seconds.

To take things even further, an available Off-Road Group adds more protection to the Overland when venturing far off the beaten path. This package adds skid plates to protect the fuel tank, transfer case, underbody and front suspension. It also adds the aforementioned eLSD, 18-inch polished aluminum wheels and all-season tires. This equipment all proved useful at the proving grounds, as the Grand Cherokee L tackled trails meant for putting the Wrangler through its paces. Even with the L’s longer wheelbase, it still managed to clear breakover angles and articulated terrain that gave me pause on approach. The sounds of rocks scraping the skid plates was unnerving, but this three-row Jeep proved itself worthy of the Trail Rated badge that also comes with the Off-Road package. 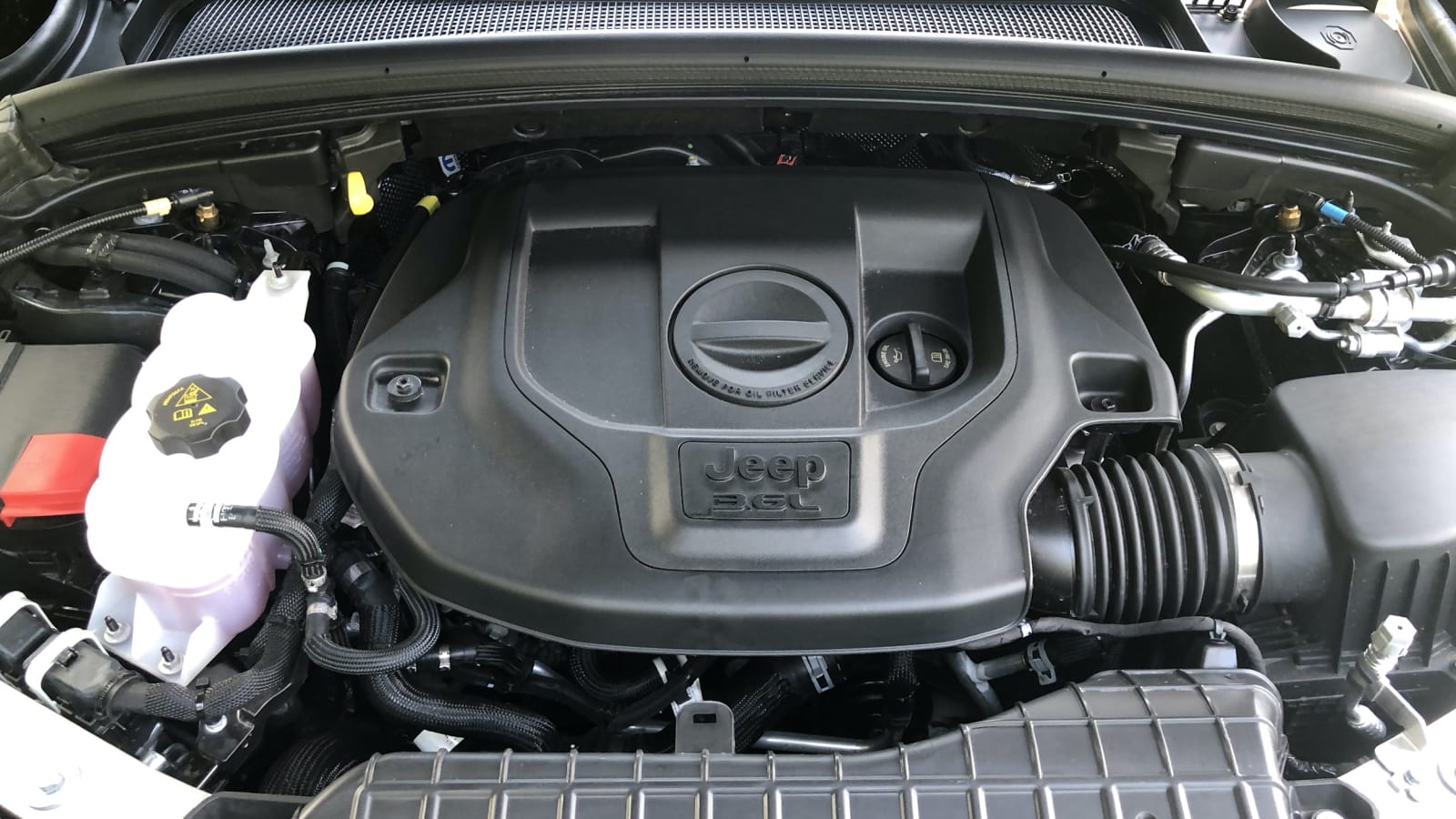 Powering the Grand Cherokee L are the same two engine options seen in the non-SRT/Trackhawk versions of the current two-row Grand Cherokee. The standard powerplant is the trusty 3.6-liter Pentastar V6, supplying 293 horsepower and 260 pound-feet of torque. Pentastar-equipped versions are rated to tow up to 6,200 pounds in both 4×2 and 4×4 layouts. That’s far more than the typical three-row family crossover. The V6 also returns 19 miles per gallon city, 26 mpg highway and 21 mpg combined in rear-drive versions. 4×4 V6 models get 18/25/21 mpg. Those figures are about the same as the typical three-row family crossover.

In the Overland trim and up, customers who want more power can opt for the 5.7-liter V8 in 4×4 layout, providing 357 hp, 390 lb-ft of torque and 7,200 pounds of towing capacity. The V8 is rated at 14/22/17 mpg. Both engines mate to the TorqueFlite eight-speed automatic transmission.

My time was spent in only V6-powered versions of the Grand Cherokee L, in various trims. Considering its power-to-weight ratio compared to the competition, I worried that this powerplant could make the hulking Grand Cherokee L feel sluggish. But even the heaviest Summit Reserve package/trim (and most expensive, at $63,690 with the V6 — pricing breakdown can be found here), didn’t feel any lazier getting to highway speeds or passing slower vehicles than our long-term Hyundai Palisade. It feels like plenty of motor for the Grand Cherokee L, both on-road and off, but it’s nice to have the V8 available for those who need to tow more, or who just like the sound and feel of a Hemi under the hood.

Our drive started in Detroit’s Eastern Market and took us to Stellantis’ Chelsea Proving ground by way of both expressway and the lake-dotted winding rural roads of Southeast Michigan. On the highway, we made use of the Grand Cherokee L’s Active Driving Assist system, which is essentially adaptive cruise control paired with lane-centering steering assist. We had no qualms with the cruise control function during our drive. The lane centering worked, but required early driver support when the highway gets even a little curvy.

The air suspension also features new active damping, which Seel says allowed Jeep “to tune the specific control and stability of this vehicle to the three-row SUV requirements.” In practice, this provides a comfortable yet still truck-like ride in the Grand Chereokee L. The L will bounce over bumps in the highway, but the rebound feels well controlled — a great blend of a traditional Jeep feel with a surprising level of comfort. Funny enough, in testing a Limited trim without the Quadra-Lift later in the day, I noticed the suspension less — perhaps I’m just used to feeling more of the bumps and jitters of Michigan roads, or maybe my off-road session desensitized me. Either way, the air suspension stands out as another luxury indulgence.

The 10.1-inch Uconnect infotainment touchscreen is standard across the L lineup. This one screen does a lot more than just control audio functions and in-car apps. Depending on how the L is equipped, it also serves as a display for camera feeds like parking cams, a rear seat monitor and, most importantly for us today, a forward-facing trail camera. You can also do such diverse things as monitor pitch and roll when off-roading, adjust the upper and lower interior ambient lighting, or display the retro-looking digital decibel meters in the McIntosh premium audio system. Even better, it’s quite customizable, with different pages, widgets and shortcuts. The 10.25-inch digital instrument cluster, likewise, can be customized. It can display navigation right there in front of you, and also serves as the display for available forward night vision. There’s also an available head-up display to provide information without having to take your eyes off the road.

But while the driver’s seat is the best seat in the house — especially when equipped with the available massaging front seats — the rear two rows aren’t bad, either. The vehicles we sampled all had the six-seat configuration with second-row captain’s chairs. They can be heated and ventilated, and offer their own climate controls and storage console. Importantly, the chairs themselves tilt and slide far forward to provide a wide entry into the third row.

Sitting in the way back, I was pleased to find comfortable legroom, especially with the second row slid a little forward, and more-than-ample headroom. I wouldn’t feel bad about putting even a tall adult back there, though two adults might have to get chummy as the seat is flanked by the rear wheel wells. The two-person third row also means the Grand Cherokee L can seat only six or seven people, versus the seven or eight as in the Palisade or others.

The 2022 Grand Cherokee L is still inarguably immense, though, and unusually swank. It’s a fashionable and comfortable way to move around more people and cargo, or to even impress guests with its rich styling and grand accommodations. But while the on-road experience has been elevated, the best part of Jeep life happens far from any pavement. Thankfully, this handsome, plus-sized SUV excels at that, too.