The 2021 Porsche 911 Turbo rips. It rips harder than nearly every other production car on this planet. The review could probably just end right there. Dreaming up superlatives, fanciful metaphors or long, streaming sentences for how quick this car wouldn’t be enough to do it justice. Porsche claims 0-60 mph happens in 2.7 seconds, but it feels quicker than that. You’ll be grazing 100 by the time you’re able to collect yourself enough to squeak out a few expletives about how quick it is. Seriously, though – others have clocked the ever-so-slightly-quicker 911 Turbo S in the low-to-mid 5s for the 0-100 mph run. What could possibly be beyond this level of speed? Racecar?

If the 911 Turbo were a racecar, its acceleration would make sense. But it’s not. The 911 Turbo, on top of being able to suck your eyes into your skull at a moment’s notice, is still the grand-touring masterclass that it’s been for so many years. Besides respecting how quickly that next corner is coming up, this car is no more difficult to drive than any other Porsche 911 of the current generation. And just in case you missed our previous 911 coverage, that means it’s easy, intuitive and engaging in every environment.

Porsche took advantage of the advancements made with the standard Carrera’s twin-turbo engine and made that 3.0-liter flat-six the basis for the larger 3.7-liter flat-six found in the capital-T Turbo (Porsche calls it a 3.8, but it’s officially 3.745 liters, which does not round up to 3.8). Where the 3.0-liter currently tops out at 443 horsepower in Carrera S form, the new Turbo makes 572 horsepower and 553 pound-feet of torque – that’s 32 horsepower and 30 pound-feet more than the previous Turbo’s engine. There’s also the Turbo S with its 640 horses and 590 pound-feet of torque, but we’ll dive into the Turbo vs. Turbo S discussion at the end.

Porsche managed to squeeze so much extra power out of its larger 3.7-liter with the help of new, larger turbochargers that can force even more air into the engine. There’s a new intake system with bigger charge air coolers, and combined with Porsche’s trick piezo injectors, aids in producing those massive power figures. Porsche is also letting you spec its Sport Exhaust system as an option on the Turbo for the first time, ensuring that the Turbo is no quieter in volume than any other boosted 911 – you’ll recognize it by the dual oval tips and the extra snap, crackle, pop noises on the overrun.

The eight-speed PDK dual-clutch transmission is also carried over from the 911 Carrera models, replacing the 7-speed before it. Porsche went to work fortifying the Turbo’s version for the additional power by using optimized steel plates and a stronger gear set. The extra gear allows Porsche to make first shorter and eighth extra-long, allowing for better off-the-line acceleration and improved highway fuel economy. Porsche added additional water cooling and reinforced steel plates in the all-wheel-drive system that allows the front differential to accommodate more torque – up to 368 pound-feet can be sent forward if necessary.

It wouldn’t be a proper performance upgrade if the suspension, aerodynamics and brakes didn’t get some love, too. Porsche Active Suspension Management is standard, but the optional PASM Sport on our tester lowers the car by 10 mm to make the ride and handling even racier than a regular 911. It even adds a set of helper springs on the rear axle to make sure the main springs are properly pre-loaded for full rebound. The front and rear tracks are wider than the previous Turbo (by 10 mm and 42 mm, respectively), and the tires get wider to match. Rear-wheel steering, an option on lesser 911s, is standard on the Turbo. You’ll have the choice between two summer rubber options: Pirelli P Zero or Goodyear Eagle F1 Super Sport. Unfortunately, our car was still wearing winter rubber despite unseasonably warm temperatures.

The new aerodynamics of the 911 Turbo are worth a deep dive all by itself – you can read that here. But suffice to say, there are lots of moving parts, and it all results in more downforce than the Turbo before it. The active front spoiler is the most intriguing of the bunch. Twist your way to Sport Plus mode, and the chin spoiler that was hiding under the bumper fully deploys downward. The car even provides a warning message in the dash that your front ride height is lower than it was before. These moving bits are the key elements that visually differentiate the Turbo from non-Turbo models beyond the huge rear wing and massive rear fender intakes. The bumpers are different as well.

Despite the Turbo’s buttoned-down and expert-level chassis, this car’s quickness dominates the drive. It’s hilarious to watch people react to Porsche’s ludicrous launch control, as it both punches you in the gut off the line, then immediately transitions into what I’d imagine a fighter jet feels like as it’s gaining speed. If you’ve ever ridden any of the world’s quickest roller coasters, it’s a bit like that.

In most circumstances, the legal fun ends after a few seconds. You’re just waiting for the lapse in acceleration that sets on in most sports cars above a certain speed, but the 911 Turbo just refuses to give in. If you’re lucky enough to be somewhere that it’s legal and safe to do, this car will top out at 199 mph. The noise is mostly identical to that of the 911 Carrera models, but I could detect a slightly higher volume of turbo and intake sounds, which feels about right for the capital T Turbo. 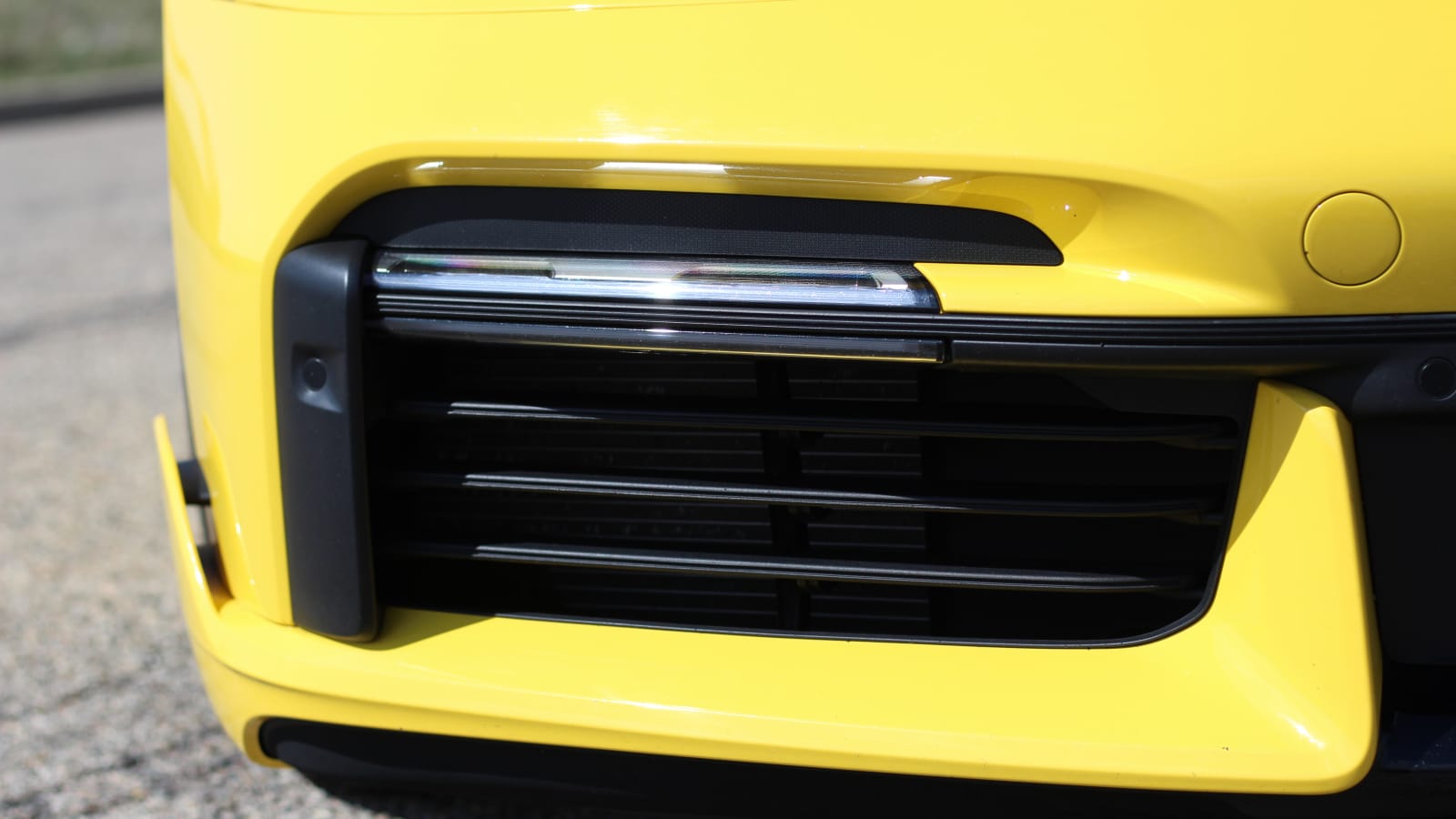 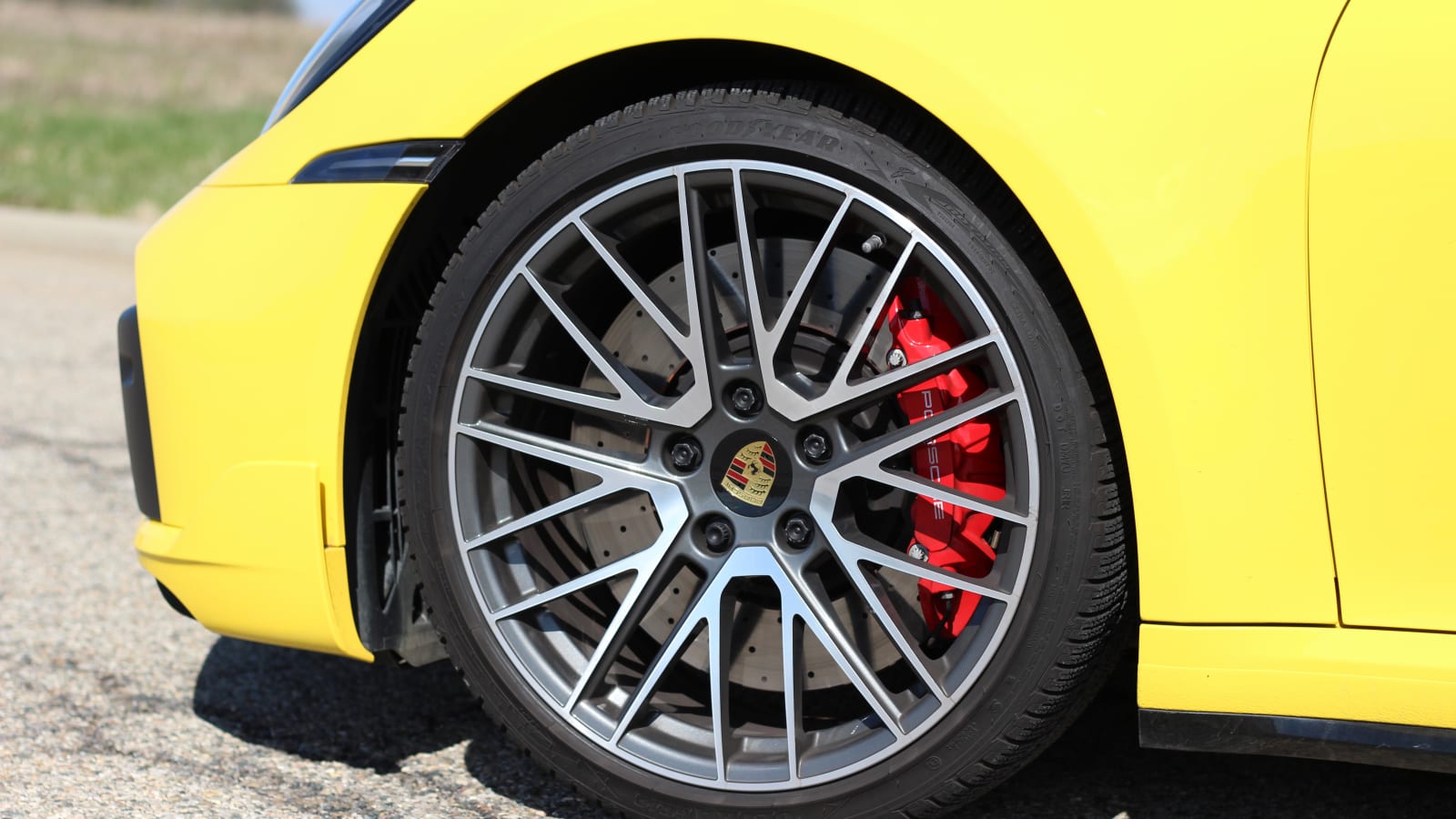 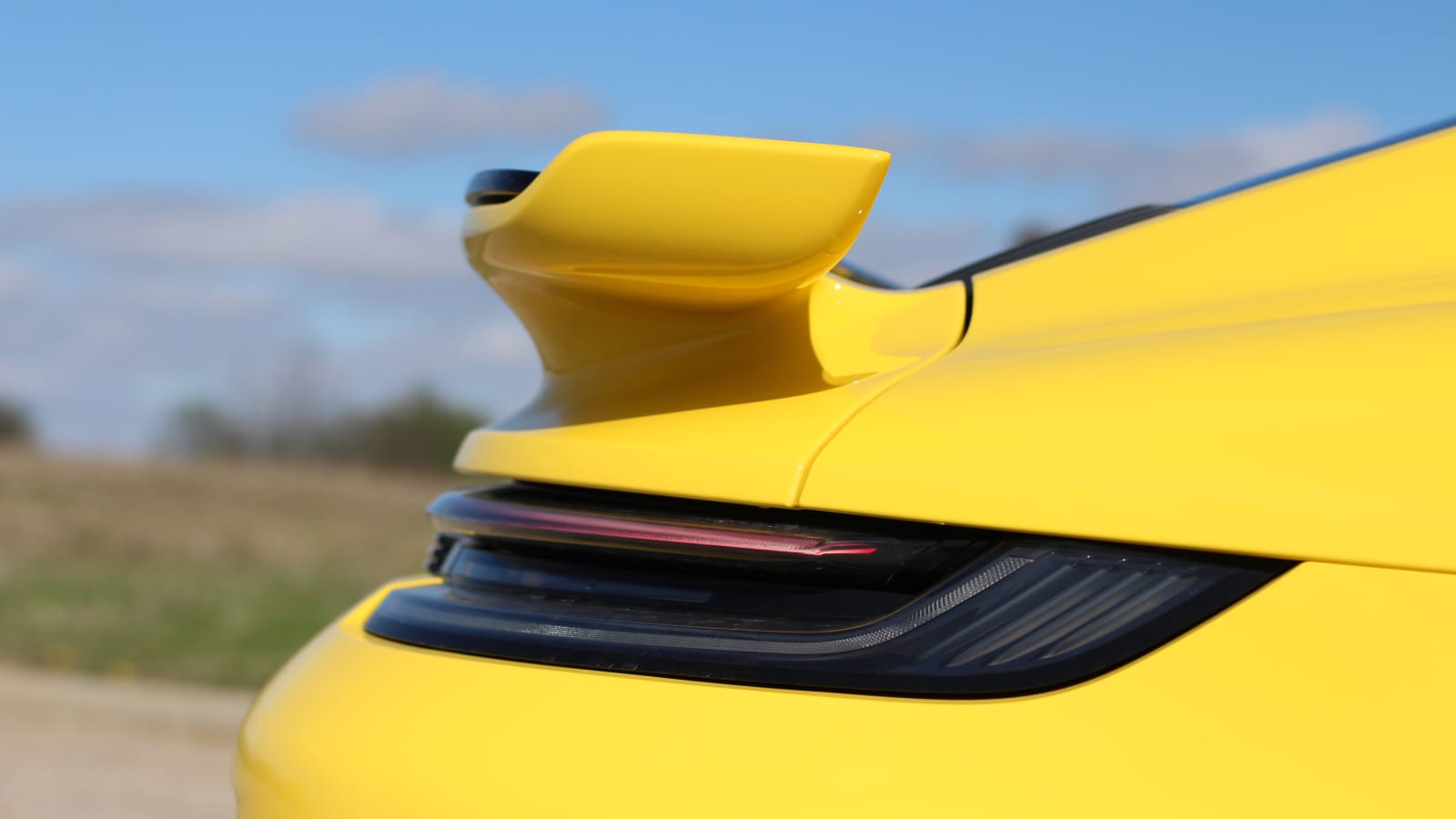 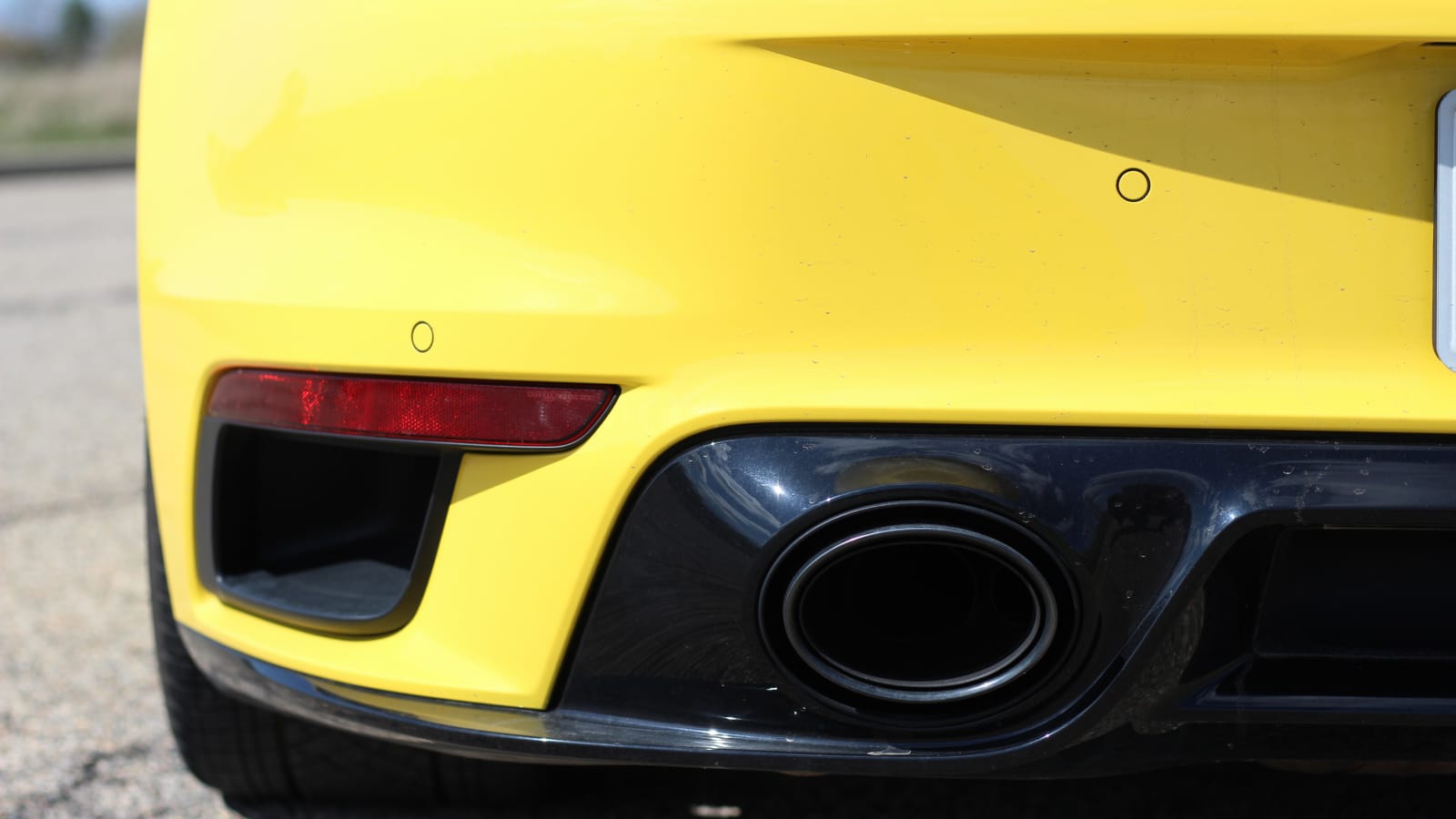 Without having driven a Turbo with the standard suspension, it’s difficult to tell if the $1,510 PASM Sport Suspension is worth it or not. What I can say is that this car’s ride and handling balance is different compared to the 911 Carrera variants I’ve previously driven The rear is stiffer and more liable to dance around on you with a touch of oversteer on occasion. Some of that can be attributed to the winter tires on our test car providing less grip than summers would back there, but the firmer suspension is definitely contributing.

The 911’s normal, daily-driver-friendly ride is disrupted by this stiffer suspension, too. It crashes a touch harder over broken pavement and potholes. Plus, the car is more jittery and easily upset over un-smooth backroads. I’m sure it’s a superior setup on track, but I’d put good money on the non-PASM Sport Suspension being a better companion for all street driving.

The important takeaway from the suspension here is that this car’s boisterous amount of acceleration is backed up by a chassis that can handle it at every turn. Those straightaways in between corners on your favorite roads might disappear quicker than you’re accustomed to, but the rock-solid brake pedal, impeccable steering and high grip limits will never leave you asking for anything more on the street.

Every last bit about how the 911 Turbo drives is on the level of true mid-engine supercars. Plus, you can step into one at a price that undercuts competition like the Lamborghini Huracan Evo, McLaren 600LT or Audi R8 V10 Performance. That starting point for a 911 Turbo coupe is $176,650. If you want the roof to go down, a Turbo Cabriolet like the one pictured below we briefly tested in Oregon starts $189,450. Of course, the Italian options are going to offer more of that supercar character and sound drama than this Porsche will.

Assuming you’ve got the money to approach that starting line, you might ask yourself, why don’t I just buy the Turbo S with more power? And that’s a very valid question. Porsche says it’ll get to 60 mph one tenth quicker and complete the quarter mile three tenths quicker, thanks to its larger turbochargers. For that additional speed, it’ll cost you an extra $32,700. The S also gets a few performance upgrades baked in, including the super-expensive carbon ceramic brakes, Porsche’s dynamic anti-roll tech, center-lock wheels and 18-way power seats. Porsche will let you option all of those items onto the regular Turbo, though (as the above Cabriolet will attest), so it’s not like you’re going to miss out on anything if you want it. Plus, there’s no difference in suspension tuning or car setup between the Turbo and Turbo S.

The price gap narrows considerably after you add in those extras to a Turbo. This leaves us with a conclusion. If you want all the tricks in the bag and desire the extra cache the “S” brings, the Turbo S isn’t a bad buy. If you don’t care for tacking on every last, little performance option Porsche offers, the regular Turbo is the smart choice. I can assuredly say that you won’t ever depress the throttle on the Turbo and wish you’d have sprung for the S. You could spend the extra $32,700 on extra nice-to-have options, like those on our test car that totaled $220,300 after Porsche was done with it. There’s never any shortage of ways you could hand money over to Porsche, and the new Turbo is a hell of a good one to land on.