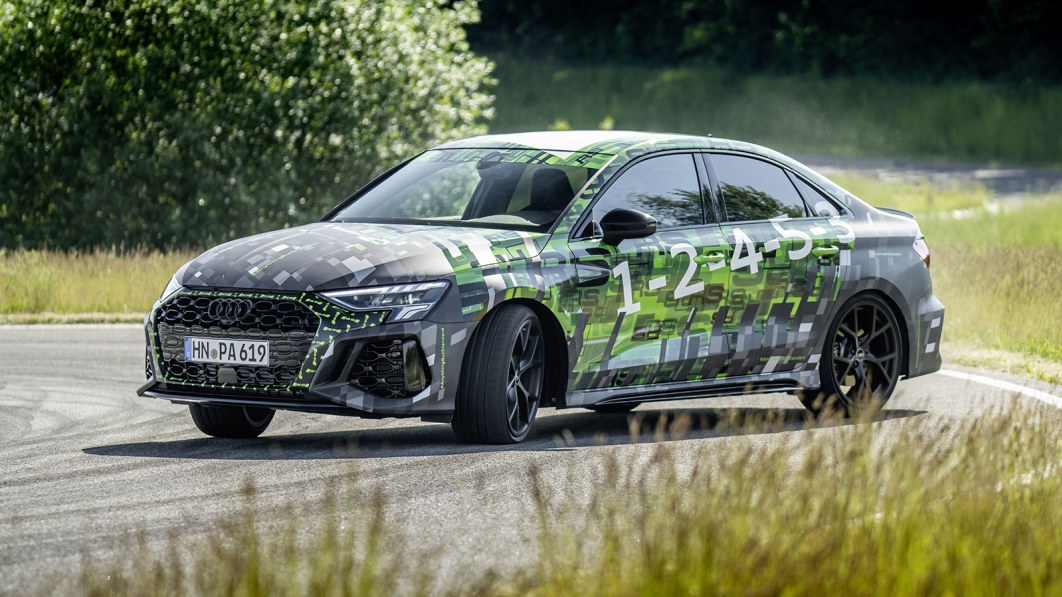 The 2022 Audi RS 3 is almost here. We’ve seen it in spy shots, and now Audi has released a bunch of details on what makes it tick. So even though we don’t get to see it uncovered yet, we do have some of the most pertinent details.

Right off the bat, Audi fans will be pleased to hear the turbocharged 2.5-liter five-cylinder lives on. It’s a bit more powerful and makes a bit more torque. It goes from 394 horsepower to 401 according to a background presentation from Audi, and from 354 pound-feet of torque to 369. An Audi representative noted that U.S. power numbers haven’t been fully finalized, so there could be slight changes. Peak power is also now available from 5,600 rpm up to the 7,000 rpm red line. Power still goes through a seven-speed dual-clutch automatic and all-wheel drive. Audi estimates it will hit 62 mph in 3.8 seconds and, when equipped with the RS Dynamic package with carbon ceramic brakes, it can hit a top speed of 180 mph.

That all-wheel-drive system now features a fancy rear differential. It has a pair of clutch packs for each rear axle, a bit like what the Focus RS used, so it can do active torque-vectoring. Audi notes that it can send all of the rear torque to either wheel. Audi takes advantage of this with a new driving mode called RS Torque Rear. It sends more torque to the rear (though Audi didn’t say exactly how much), and it will, as needed, send all the rear power to the outside wheel to make the car drift. So yes, this RS 3 has a drift mode. Naturally, it also changes the traction, stability, engine, steering and shifting parameters to encourage it, too. There are also RS drive modes that prioritize fast-grip driving while also offering a rear-biased torque split.

The RS 3 sits on MacPherson strut front suspension and multi-link rear. As standard, it gets a fixed shock and spring setup, but there is an optional adaptive system. The car sits 0.4 inch lower than the S3, and as already mentioned, it will have carbon ceramic brakes as an option.

With all those details out, there’s not much left to reveal except what the car looks like. So we should see that very soon, probably with a handful of other details.