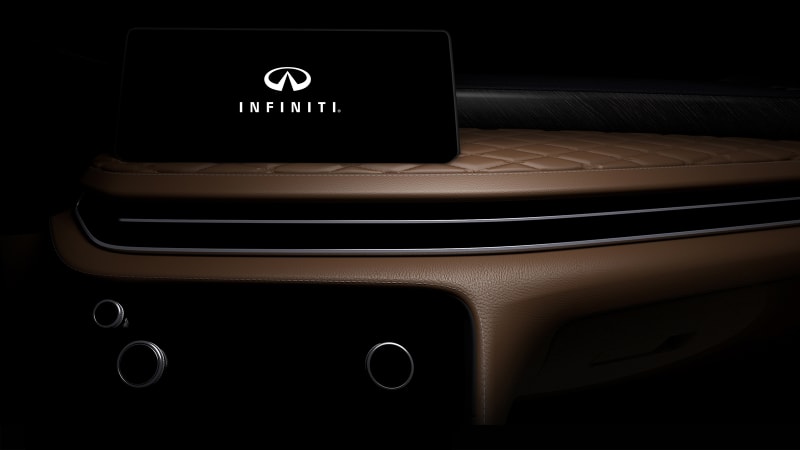 The launch of the 2022 Infiniti QX60 has been a somewhat drawn-out affair, with a near-production concept being shown back in September. But the official reveal is now in sight: June 23 to be specific. And with this announcement comes our first brief look at the three-row luxury crossover’s interior.

It features the now trendy continuous air vent design, but has some interesting twists. The diamond-stitched top is unique. It looks like there may be a split, two-tone design between the driver and passenger sides like what we’ve seen in the QX50 and QX55. Sitting atop the dash is an infotainment screen, and behind that is an arcing piece of wood trim.

We’re excited about that infotainment screen. Though it doesn’t look particularly fancy compared with some of the units coming from some American and German brands, it seems to be a big step up from current Infiniti systems that have used a somewhat odd and outdated dual-screen array. We’re hoping for higher resolution and more modern graphics.

Aside from the interior, we already know a number of things about the QX60. The concept gave us a good look at the exterior, and we know that it will use a variant of the Nissan Pathfinder’s powertrain. That means a 3.5-liter V6 and a nine-speed automatic. At 295 horsepower, it will be a bit more powerful than the Nissan version.