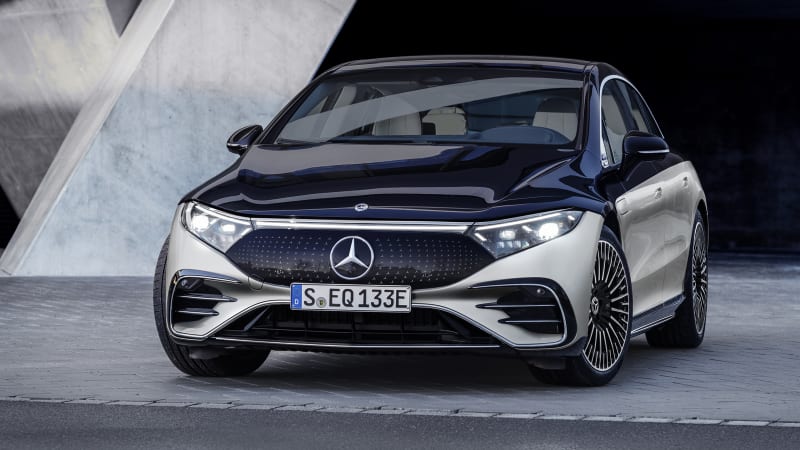 Mercedes-Benz has finally pulled the sheet off its new EQS electric sedan. This full-size luxury machine with up to 516 horsepower and more than 475 miles of range (770 km per the European WLTP standard) will do 0-60 in 4.1 seconds on the way to a top speed of 130 mph. Due to the delay of the EQC crossover, the EQS will become the first ground-up, all-electric Mercedes-Benz sold in the United States.

Thanks to several weeks’ worth of slow-drip information dumping, we actually knew just about everything about the car coming into Thursday’s reveal. The powertrain, including its suggested range of 478 miles for both the EQS 450+ and the EQS 580, was detailed early in April. The single-motor 450+ (the plus stands for “long range,” so we assume there will be a variant with a smaller battery pack, though perhaps only for overseas markets) packs 329 hp and 406 pound-feet of torque, which is good enough for a 0-60 sprint in 5.5 seconds, Mercedes-Benz says. We’re not confident Mercedes will get the same range figure under the EPA test cycle, but we expect it to top 400 miles, at least.

Moving up to the dual-motor, all-wheel-drive EQS 580 nets you 516 hp and 611 lb-ft, along with a 0-60 time of 4.1 seconds. Both models are limited to a top speed of 130 mph. These figures may not seem all that impressive given some of the acceleration numbers offered by Tesla, but keep in mind that these are not AMG models, and straight-line speed has never been a problem for Mercedes’ in-house performance division. A rear-axle steering system is available (in both 4.5- and 10-degree flavors) along with other now-standard Mercedes fare, such as adaptive air suspension.

In late March, Mercedes gave us a comprehensive first-look at the electric sedan’s interior, including the insane “Hyperscreen” setup with its OLED displays and 56-inch glass surface. This is powered by the latest version of the Mercedes-Benz User Experience (MBUX) infotainment system, which debuts its new  “menuless,” context-sensitive Zero Layer interface in the EQS.

The 2022 EQS will compete with the Porsche Taycan, Tesla Model S, Audi E-Tron GT and the (forthcoming) Lucid Air when it goes on sale in the U.S. in fall 2021.