PONTIAC, Mich. — Head sock on. Helmet on. Belt buckled. Simple enough, now the tricky bit: diving four menus deep into the touchscreen to fettle with the traction control and stability control settings. Yes, Volkswagen removed the age-old “TCS” hard button from the Mk 8 GTI’s interior. Turning traction control and stability control off in the 2022 VW GTI requires that you first enter the “Vehicle” menu in the touchscreen, swipe one page over, tap the “Brakes” section, open a dropdown menu, and only then you are allowed to put ESC in Sport Mode, or turn it completely off.

After you complete this jig (which takes about 10 seconds even after you get good at it), VW dutifully rewards you with track-friendly electronic compliance that can’t be had in the Mk 7 GTI. You see, the only way to be completely rid of those electronic nannies in the previous-generation GTI is to visit the aftermarket coders, as Volkswagen doesn’t let you defeat stability control from the factory. Why’s that matter so much? On the road, it’s no big deal. On the racetrack, being able to turn off stability control can be the difference between a happy or frustrating day. And the racetrack is where we’re at: M1 Concourse in Pontiac, Mich., to be exact.

Volkswagen brought us out here to let us verify that the Mk 8 GTI is still a sublime do-it-all front-drive hatchback. We already drove it on the road and found it to be as splendid as ever, so now it’s time to find out if VW’s updates help it around the track. Both the new car and old Mk 7 GTI are on hand to make comparisons all that much easier, but there’s a big asterisk on any and all comparison talk.

All of the Mk 8 GTIs made available to us were fitted with supremely sticky Bridgestone RE-71R summer tires (a tire you’ll see used at track days everywhere) in front and the factory Bridgestone Potenza S005 summer tires in back. The problem here is that you won’t be able to spec these RE-71Rs from the factory. We asked Volkswagen, and the only way to get these extreme high-performance tires is to head to a tire store. If the Mk 7 GTIs on hand were also fitted with better-than-factory rubber, we might’ve had a fair comparison. But they were not. 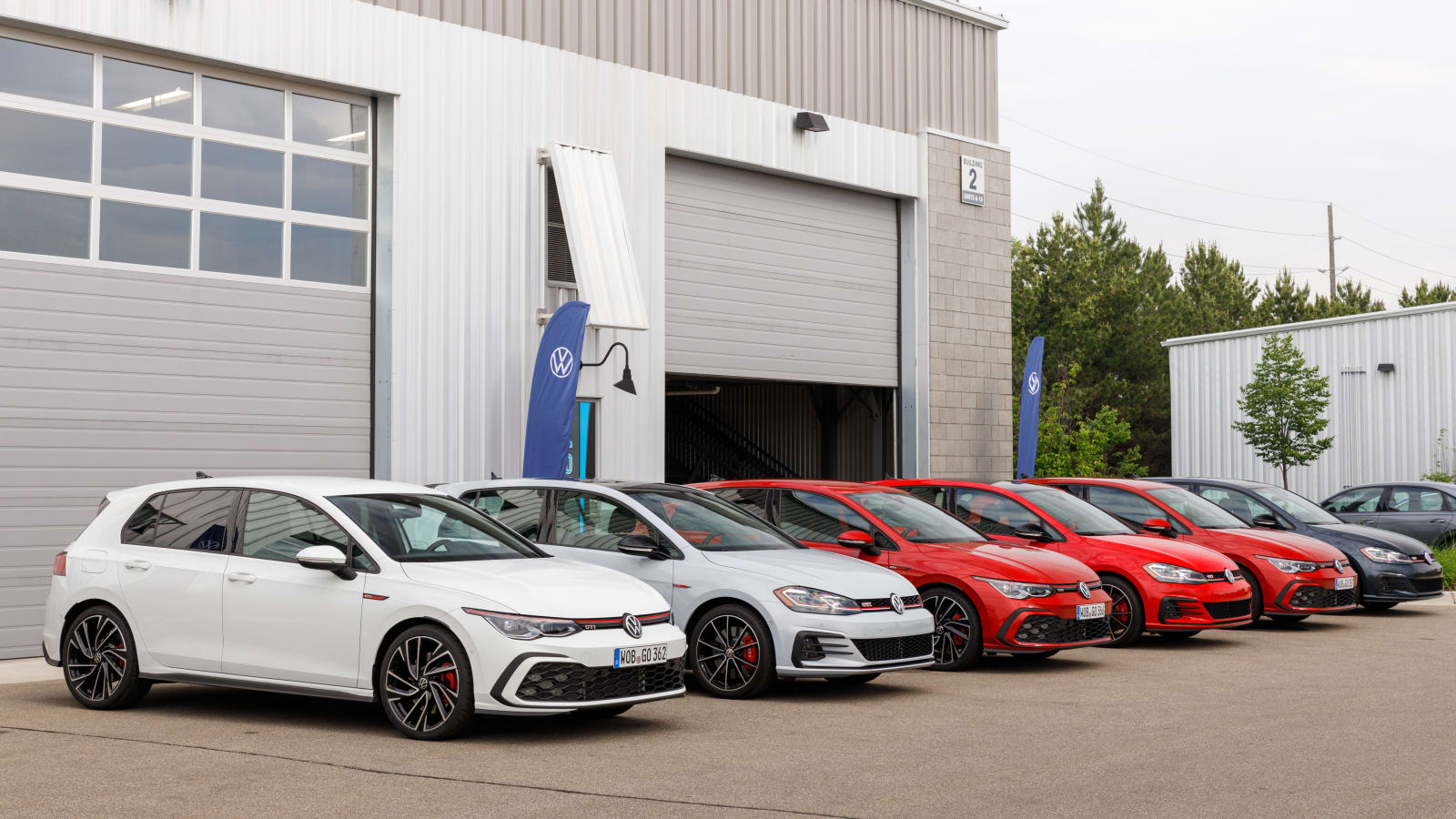 After driving the Mk 7 GTI for a few laps, it took all of one corner in the Mk 8 to know that most comparisons between the two of them would be rendered moot on account of the ridiculous front-end grip afforded by the RE-71Rs. To put this extra grip in racing terms, Volkswagen released us journalists with 20-second gaps between us, and it took all of three laps around the 1.5-mile track for the Mk 8 to fully catch up with the Mk 7 between roughly equally skilled drivers.

All that said, there are legitimate reasons why the new car would be quicker out on track besides the tires. The latest generation of VW’s 2.0-liter turbocharged four-cylinder is up to 241 horsepower and 273 pound-feet of torque, increases of 13 and 15, respectively. Both the front and rear suspensions are worked over. VW says the spring rate is effectively 5% higher in front and 15% higher in the rear. It has a new aluminum subframe that saves 7 pounds, new wheel mounts, wishbone bearings and damping bearings. All of it combines to make the GTI handle with more precision and stability.

The adaptive dampers are re-tuned and integrated into the new “Vehicle Dynamics Manager.” Volkswagen touts this new system of electronics as one of the most impactful changes to the Mk 8. It essentially ties all of the electric and adaptive systems together such that they’re now communicating and working as a team to get you round corners quicker. The stability control system now talks to the electric limited-slip differential and the adaptive dampers, making everything operate seamlessly in the background. 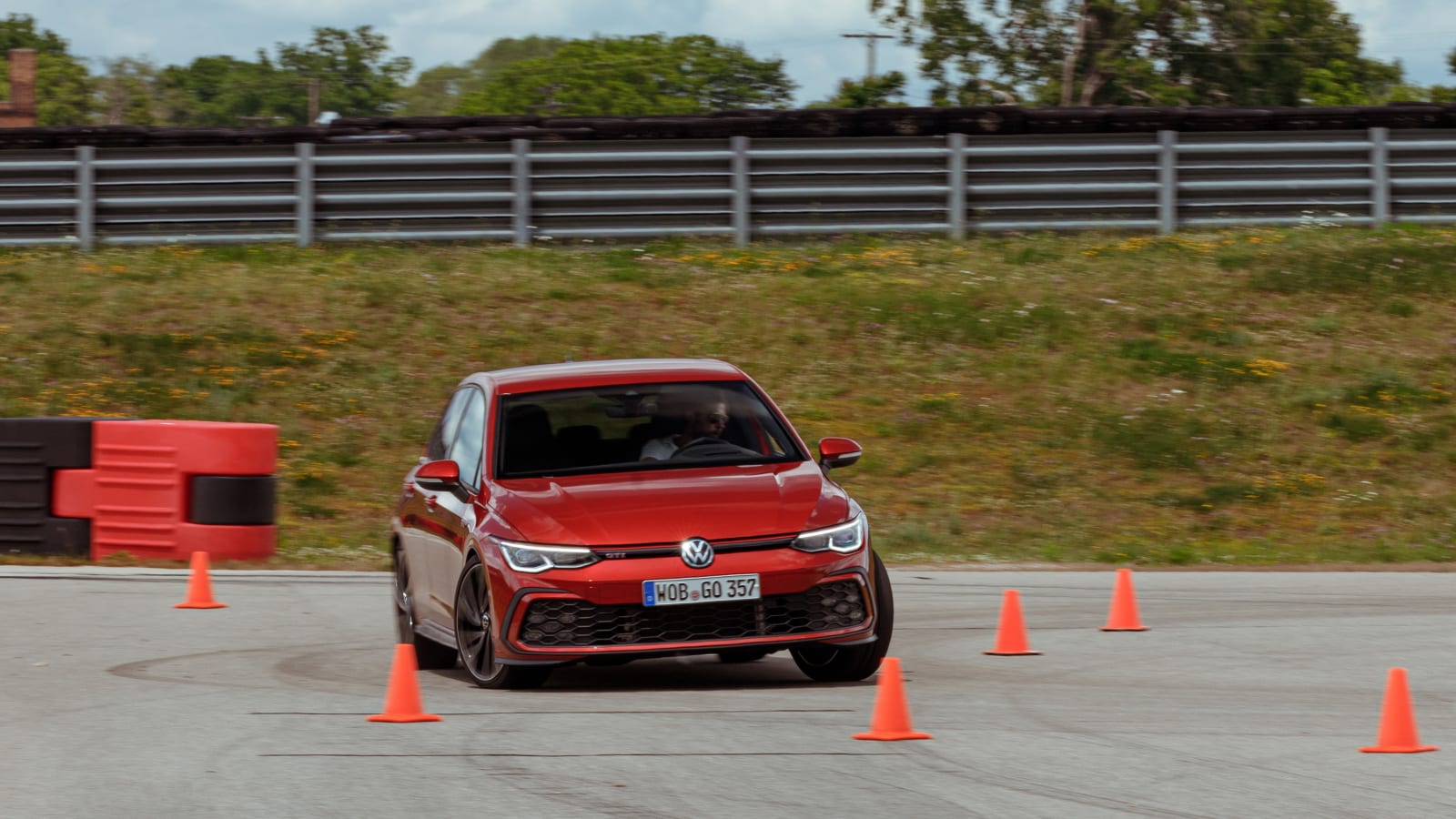 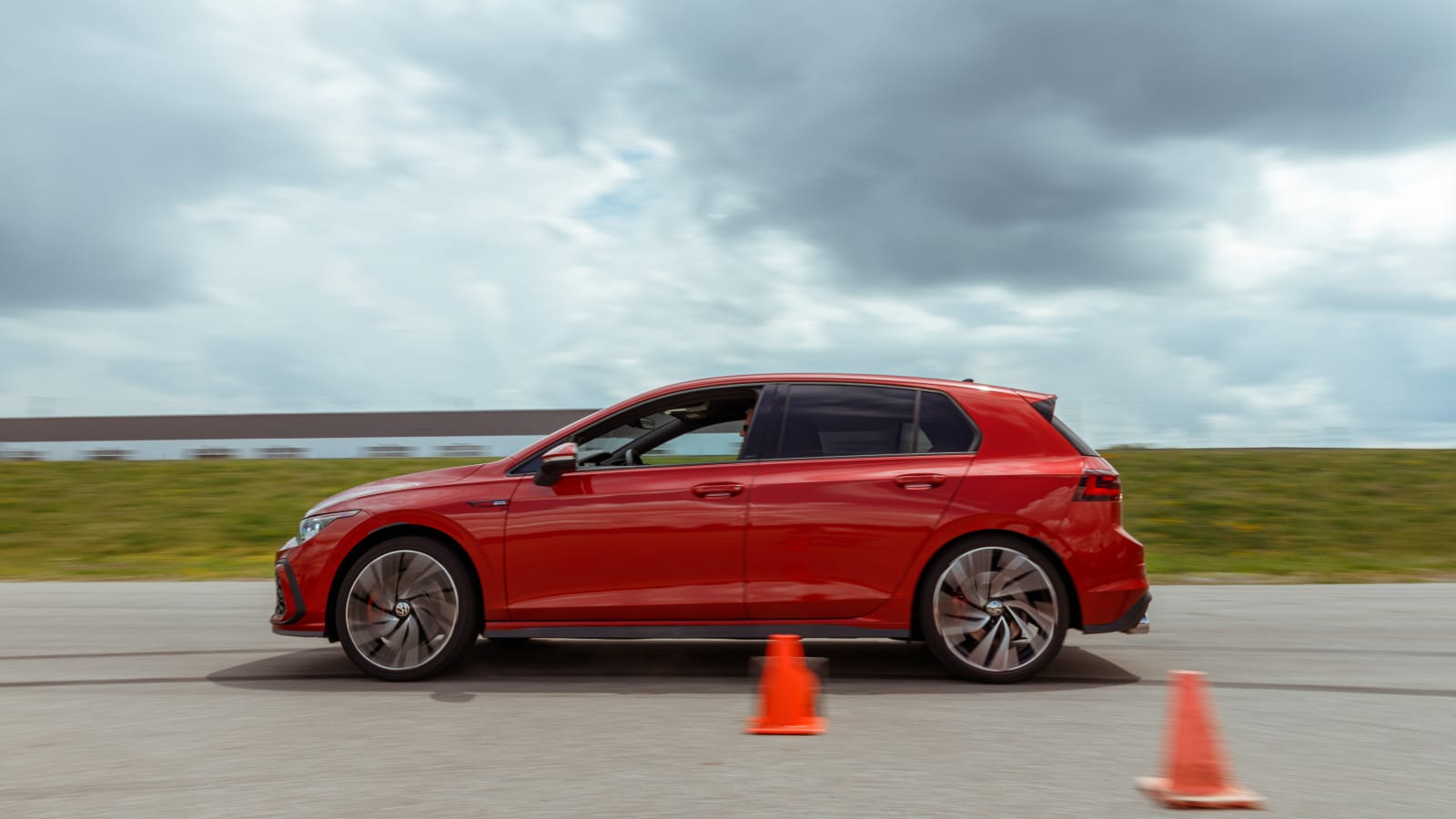 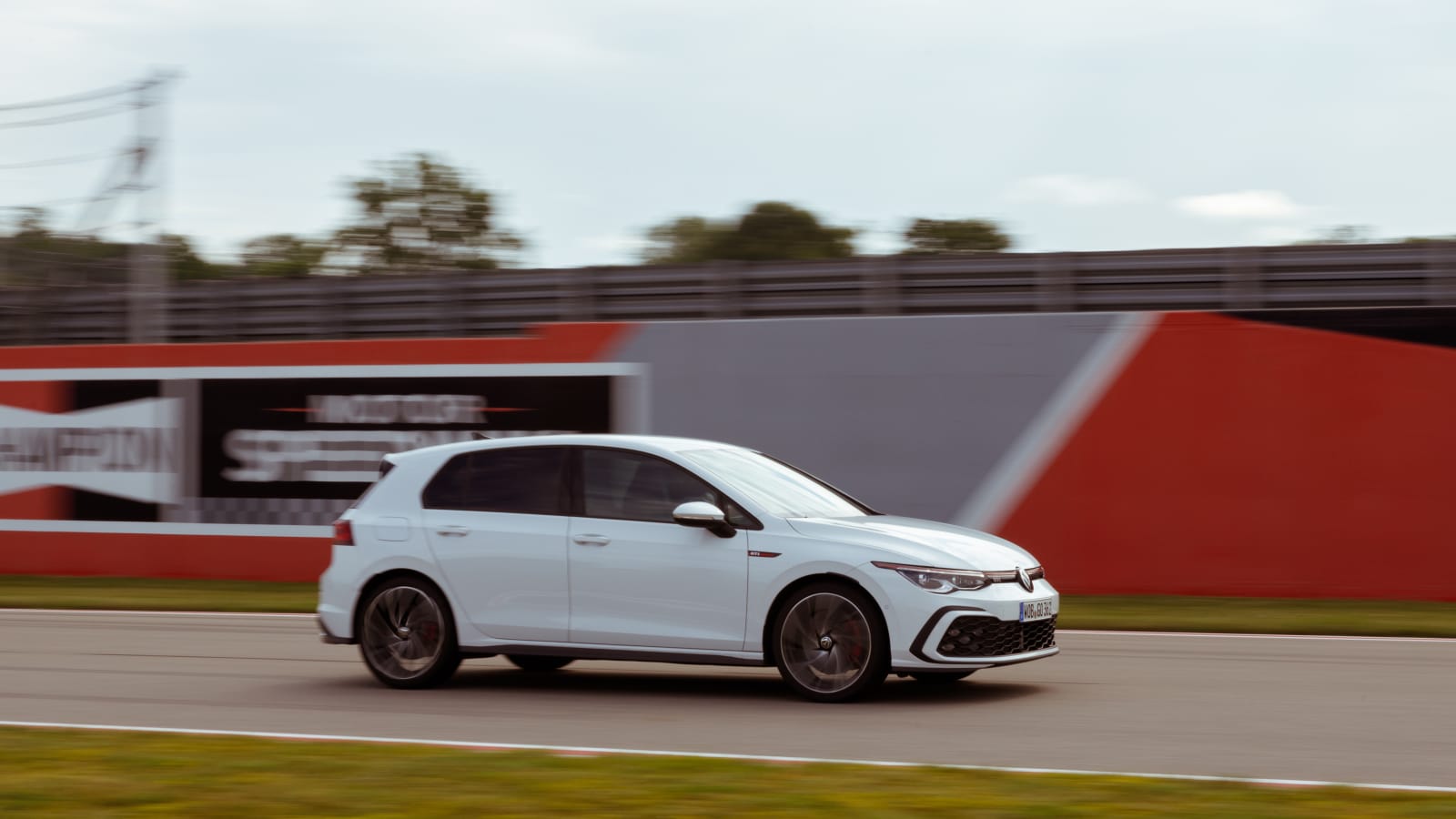 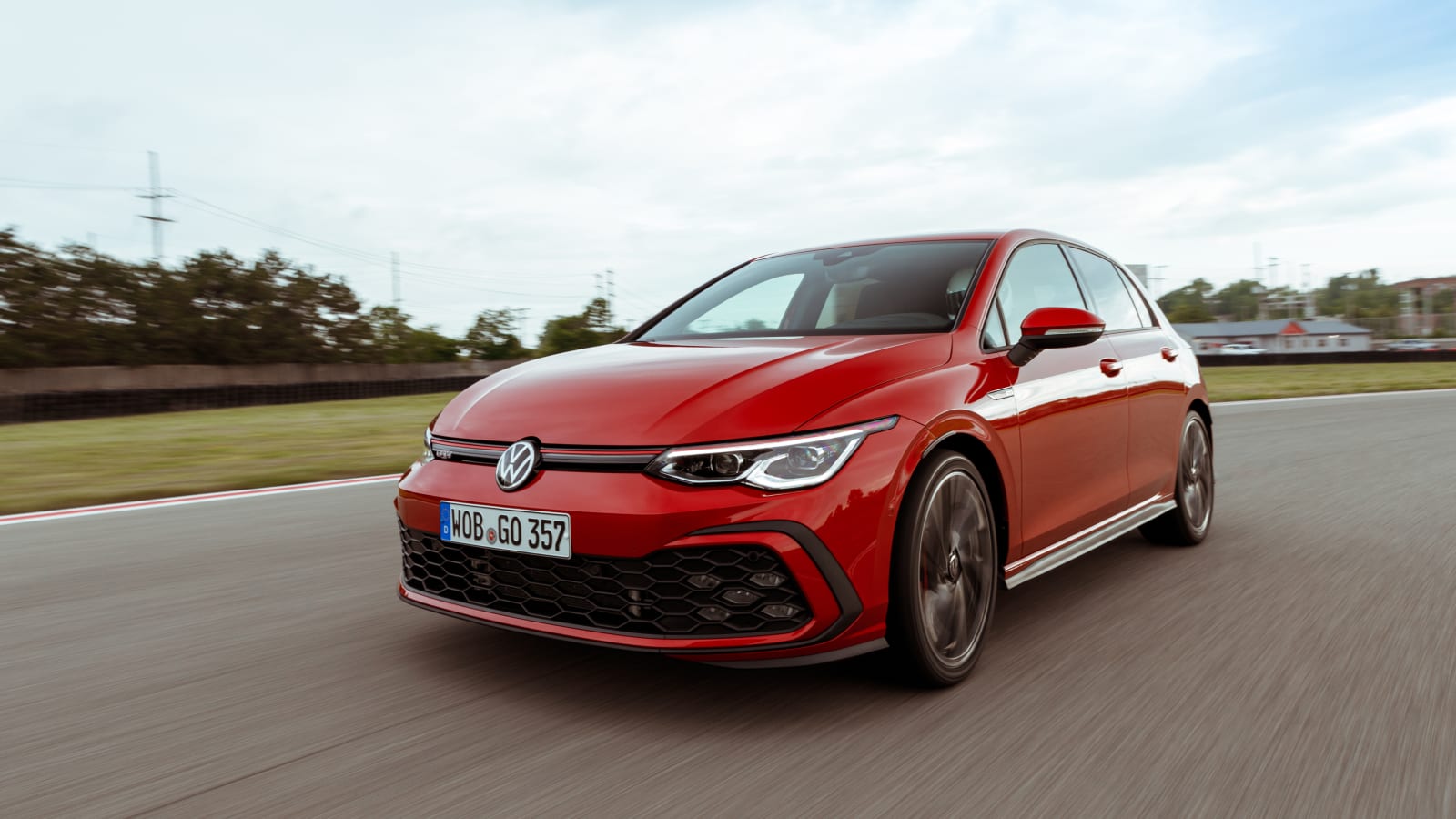 It’s difficult to put your thumb on most of these changes, but the 2022 GTI is undeniably smoother and more at home on track in places where the electronics feel disjointed and at odds with one another in the Mk 7. The biggest difference from the driver’s seat is its new ESC Sport mode. Where we’d be fighting the Mk 7 GTI around some corners, the new GTI arcs through effortlessly without cutting throttle or altering our trajectory. We hardly felt the need to even turn stability control off, as it scarcely bothered us. There’s no doubt that some of this can be attributed to the ultra-grippy tires, but the way in which the systems intervene is far more natural and less irksome than before. This conclusion was only amplified by time in both on a tight autocross course. In short, the electronics don’t get in the way of your throttle inputs anymore, letting you steer your way through corners with the throttle to a greater extent. However, in the realm of annoying electronics, there were a couple instances of dinging notifications about some of the emergency systems being off as we neared 100 mph on the backstretch. Not ideal.

The 2022 GTI’s additional thrust is barely noticeable versus the previous generation. VW’s fabulous dual-clutch seven-speed transmission is another fully carried-over bit that we’re happy to see return. It was flawless on track. You can pull the paddles yourself, but there’s no reason to do so if you don’t want to. The manual is a slightly different story. VW went away from its lovely golf ball-style shift knob to a big, chunky square knob, and it’s a downgrade. The old shift knob was light and precise, whereas this one is a touch unwieldy and annoyingly big in comparison. We also preferred the clutch feel in the Mk 7, as the Mk 8’s clutch is super numb.

Back to those tires, though. At the very least, we’ve determined that you’re going to like these Bridgestone RE-71Rs on your GTI. The front-end grip is tremendous and lets you carry more speed than you think you can through every part of the corner. It’s all so much that the sheer grip could easily be sugarcoating and amplifying how much better all the other systems are. Parsing out how much of the improved handling is because of the improved suspension versus the tires is difficult — both the front and rear of the new GTI feel a bit tauter and more reactive to steering inputs, but only slightly so. The limited-slip differential is clearly doing great work at eliminating any inside wheel slip on tight corners, but it’s also being helped by these gumball tires. 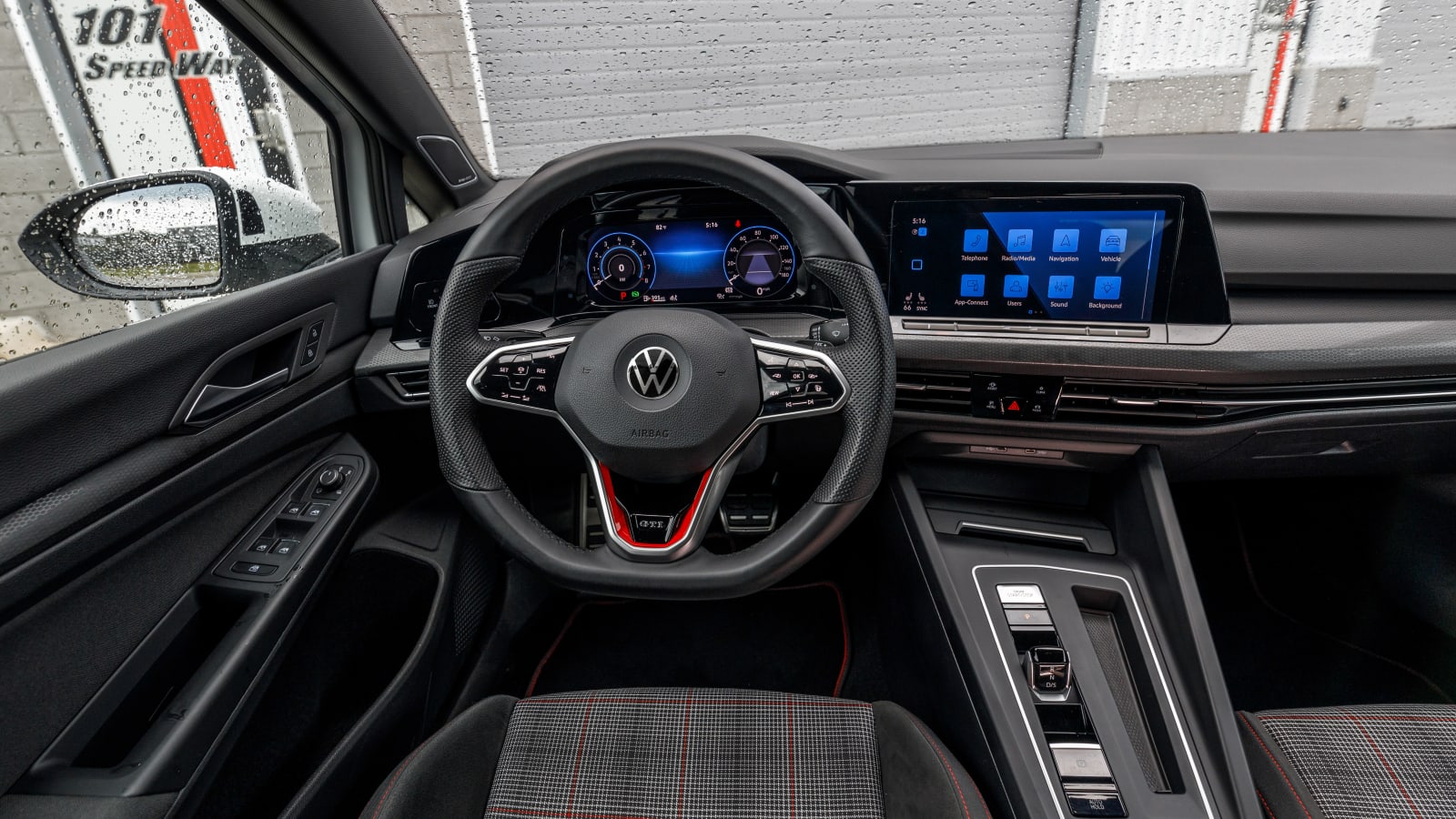 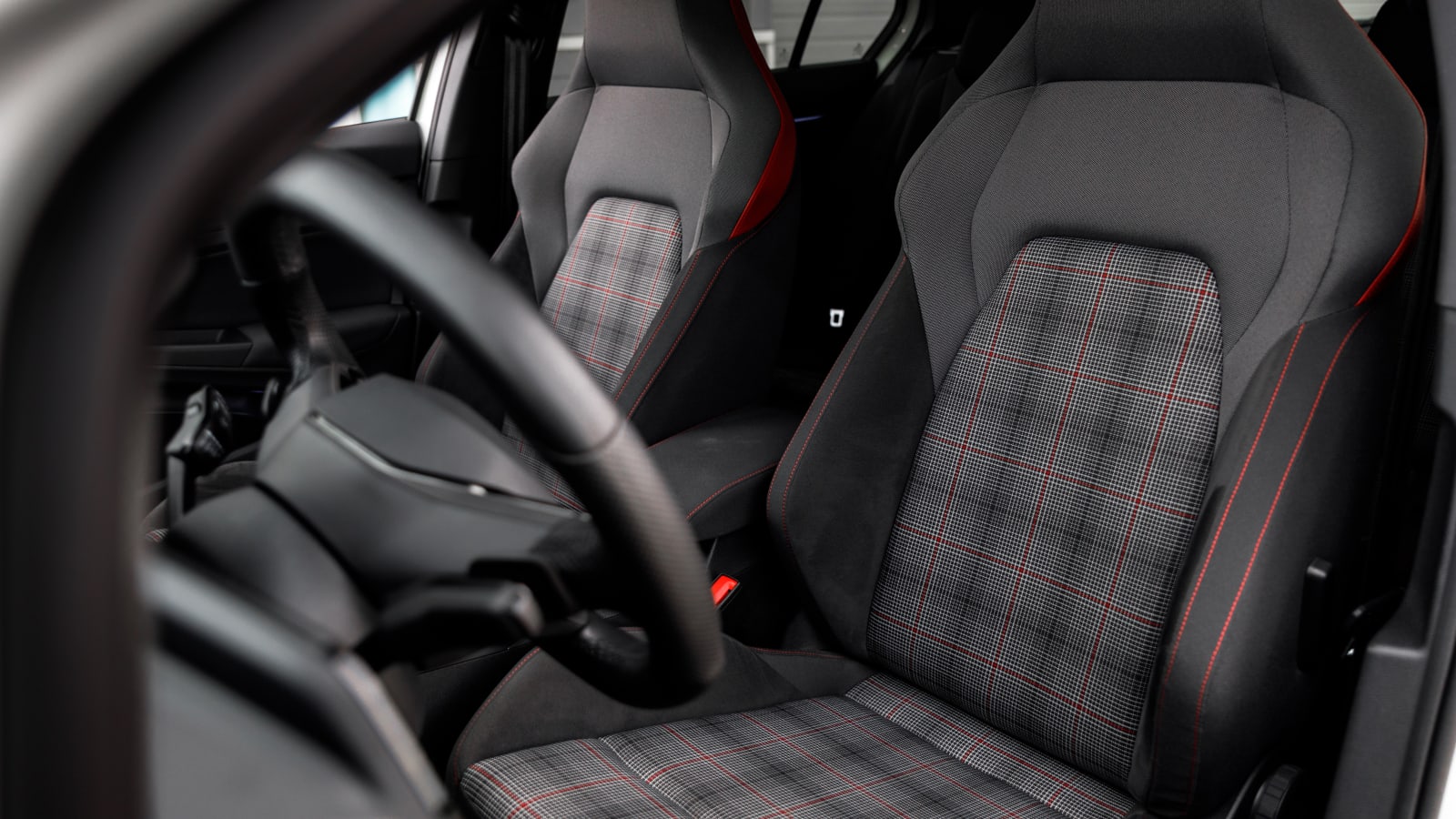 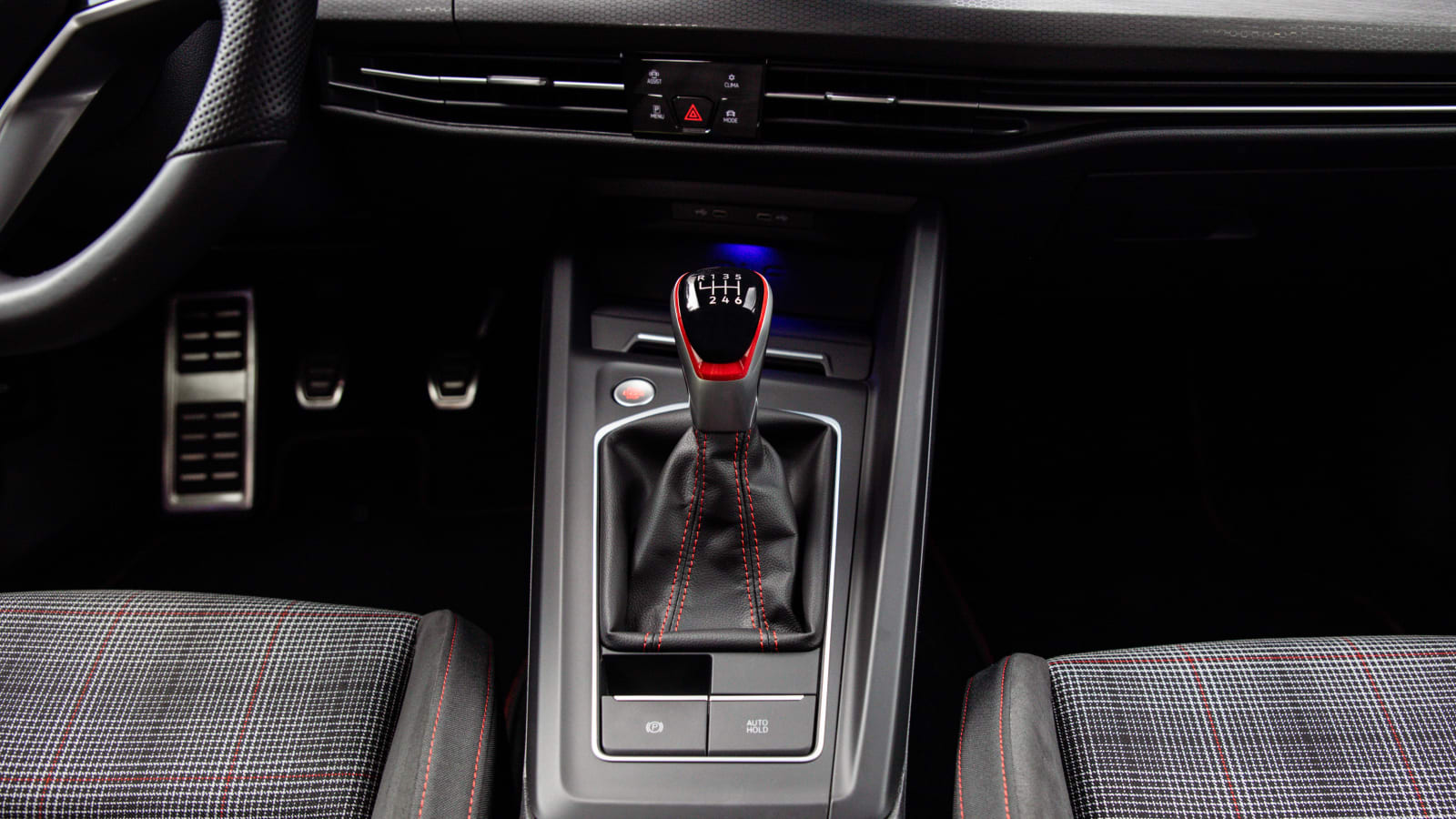 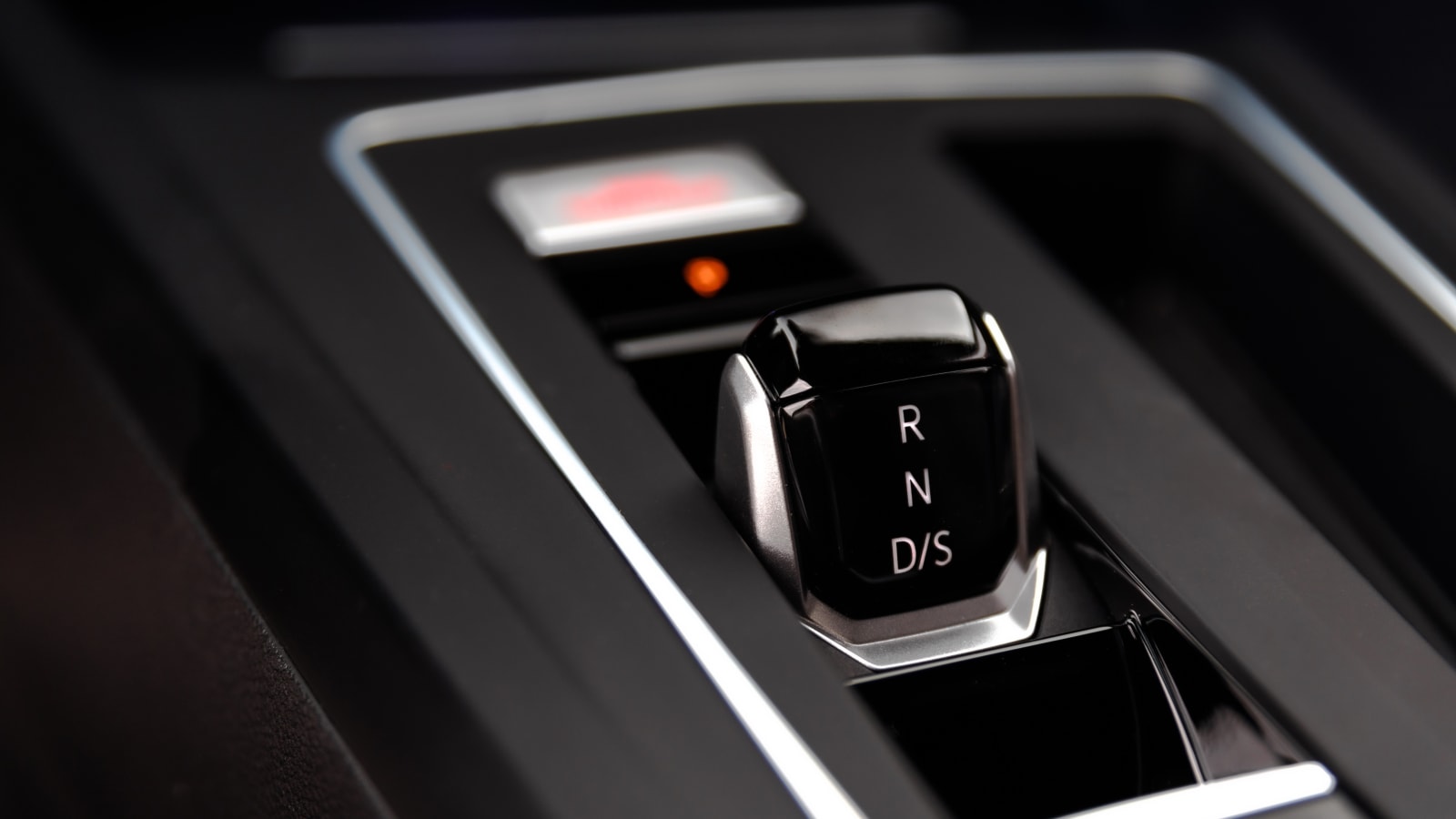 Your experience on factory rubber in ESC Sport mode could even be significantly different than ours, as the sheer level of grip could be responsible for causing fewer electric intrusions. Where the Mk 7 GTI’s tires start to feel squirmy on the limit, the Mk 8 just plods on unaffected. Both cars are beautifully balanced, toeing the line between understeer and oversteer. If you’re coming through a longer corner a touch hot, just lightly ease up on the throttle, and you’ll feel the rear safely lighten up and aid your line. It doesn’t make any jarring moves, and the car rewards your precise adjustments as a driver’s vehicle should.

One last noticeable upgrade from Mk 7 to Mk 8 we appreciated on track was the upgraded brake system. VW says the Mk 8 gets a larger brake master cylinder to bolster pedal performance and braking stability under hard pressure, and it works wonders. The Mk 7 GTI gets a little swimmy and unpleasant when you brake from high speeds, while the Mk 8 is simply a reassuring rock coming to a halt. It’s much more confidence inspiring. VW did this without even changing the brake setup — everything is the same size as it was before.

There’s no doubt that as a whole the Mk 8 GTI is an upgrade over the previous generation on track. Just how much of an upgrade is what’s so difficult to determine on account of those stinking tires. The new ESC programs are appreciated, and the complex Vehicle Dynamics Manager works wonders. But similar tires would be necessary for a true apples-to-apples comparison to see exactly what the suspension upgrades bring to the table. One conclusion we can safely come to: the new 2022 VW GTI is without a doubt the most track-ready GTI we’ve seen in the United States yet.