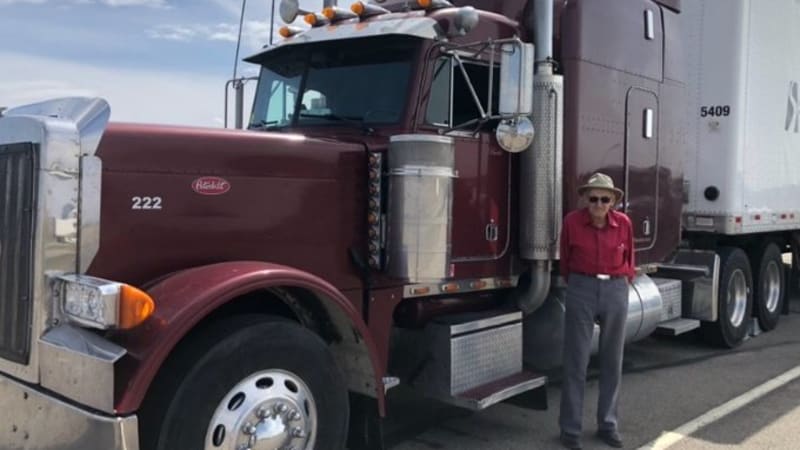 At an age when many motorists are surrendering their car keys to their retirement-age kids, 88-year-old Dave Sheets is continuing his career as a commercial truck driver, and doing quite well at it.

Sheets, of Denver, has worked 25 years for Salt Lake City-area trucking company Savannah Transport, where his boss, company owner Terry Crawford, calls him a “terrific, old-school truck driver” who can “outdo” most of his younger drivers. Sheets delivers general cargo and even hazardous materials in West and Midwest states. He doesn’t go to the coasts, but “I run a pretty good size territory and am busy all the time.”

On Wednesday, Sheets and his Peterbilt were in North Dakota, where they got checked out as part of the Commercial Vehicle Safety Alliance’s annual International Roadcheck three-day inspection blitz, which was conducted nationwide this week. The North Dakota Highway Patrol troopers who conducted the check had this to say:

#NDHP troopers encounter professional drivers who are committed to safety. We commend Mr. Sheets who is 89 years old and keeps his 2000 Peterbilt in top condition. His dedication to safety earned him an @CVSA decal after an inspection yesterday during #InternationalRoadcheck. pic.twitter.com/LY4D7pwlsl

Sheets told Transportation Nation Network that he was surprised but agreed when the trooper inspecting him asked if he could take his picture and post it on social media. “It wasn’t going to be anything negative, and I thought it would reflect good on the company and possibly the industry itself,” he told TNN.

He was even more surprised to learn he’s a minor internet celebrity. The patrol’s Facebook post on him had received hundreds of comments and been shared 3,600 times by Thursday afternoon. He doesn’t have a computer, so he learned about the fuss from his son, daughter, grandchildren and great-grandchildren.

Sheets told TNN he started driving trucks in the 1950s. He came in off the road and worked as a Volkswagen mechanic while raising a family, then returned to trucking in 1974 and has been there ever since.

His wife, Ardelle, died in 2016 just days before their 64th wedding anniversary. So Dave says there’s “no need to be home” much, and he expects to keep driving.

“As long as I can pass medical and physical,” he says, “I intend to keep doing it.”