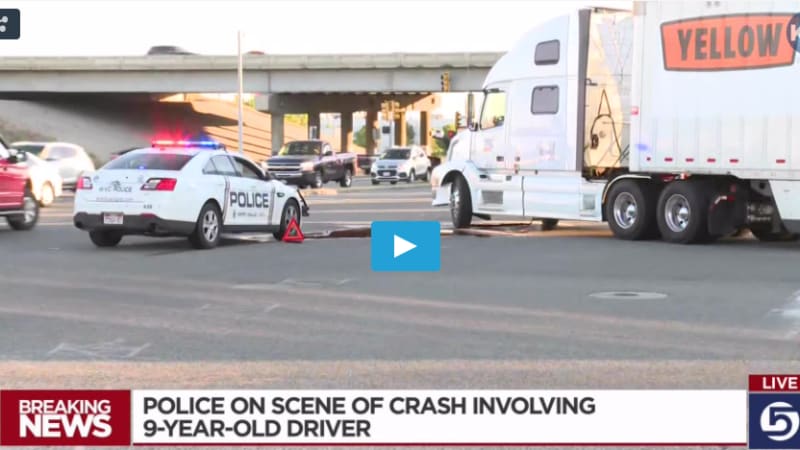 There’s a scary trend of news stories over the years in which kids get behind the wheel of a car. There was the 5-year-old Utah boy who drove off in mom’s Dodge on a quest to buy himself a Lamborghini. Or the 10-year-old who led troopers on a 100-mph chase before crashing. And the 8-year-old who took his friends and a goat on a joy ride. Or the l7-year-old in Utah a dozen years ago who drove off to avoid going to church.

Now, adding to this amusing yet dangerous canon are two Utah sisters — that’s right, this is the third case out of Utah. The girls, ages 9 and 4, apparently woke up before their parents, got dressed, grabbed the keys and took off in the family car Wednesday. The reason? They wanted to go to the beach in California and swim in the ocean.

“I guess they were intending to start their summer vacation a little early,” a police spokeswoman said.

However, the girls crashed their car into a tractor-trailer along the way. Fortunately, no one was hurt.

The saga began in West Jordan, Utah. Police there said the 9-year-old, who was driving, piloted the car onto a freeway, then exited onto another highway — though eastbound. At some point, they bumped into a pickup truck, whose driver, not knowing a child was behind the wheel but assuming instead that the driver was impaired, decided to follow their car.

Before long, “He discovered the driver of the other vehicle was not impaired but was in fact a 9-year-old female driving with her 4-year-old sister,” West Valley Police Lt. Bill Merritt told KSL-TV.

The girls exited the highway, crossed a median into oncoming traffic, and struck the tractor-trailer — head-on.

Police said the driver-side airbag deployed, but the passenger airbag for the 4-year-old did not. Fortunately, both girls were wearing their seatbelts, and neither they nor the semi driver were injured.

So, a lucky outcome for all. But scary stuff.

In the body cam footage below, the tone of the responding officer’s voice sums up the situation well when he says, “She’s driving!?”

Officers got quite a surprise when they responded to an accident this morning & discovered the driver was a 9yo girl. The young girl & her 4yo sister apparently snagged the keys to the family car while their parents were sleeping & set out on their own summer adventure. #wvc pic.twitter.com/evHq3DiBRC