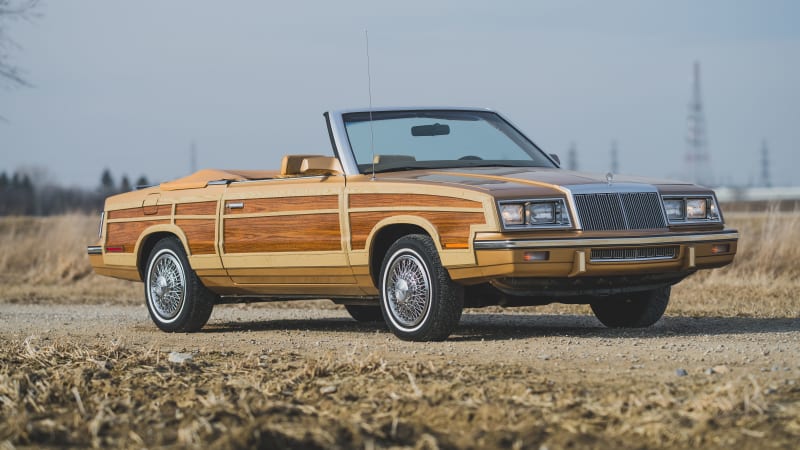 A hundred years ago, the LeBaron name was among America’s top luxury nameplates, so when we heard that auction house R.M. Sotheby’s was auctioning one off, we immediately thought of one of the coachbuilt Imperial-branded classics that competed with the highest-order Gatsby-era Cadillacs and Lincolns. What we found instead, however, was arguably even better.

It’s a 1985 Chrysler LeBaron Town and Country convertible, the one most of us know from when “Back to the Future” was still in theaters, complete with faux wood paneling. This has strong nostalgic value, especially as one of my best grade-school friends’ mom had one, and I always felt like a celebrity to get picked up from school with the top down.

While the LeBaron name may have fallen from grace by then, becoming the entry-level Chrysler offering, the T&C droptop was the most glamorous of the midsize K-cars. Did the Plymouth Reliant or Dodge Aries have acres of plastic timber appliqué on their flanks and four words (five if you count “Le” as its own) in their model names? Hell no.

It may have been powered by a 2.6-liter Mitsubishi Astron engine, but the front-driver was pure Americana. K-cars were as common in the 1980s as RAV4s are today, and the K platform was largely responsible for saving Chrysler from bankruptcy. Nothing from Ford, GM, Germany or Japan came close, then-CEO Lee Iacocca said, and, “If you can find a better car, buy it!” he would threaten.

Beyond that, the LeBaron was the steed that carried Neal Page and Del Griffith cross-country in time for Thanksgiving dinner in Planes, Trains and Automobiles. Esteemed LeBaron T&C owners counted Iacocca himself, Frank Sinatra (a wagon, even!), and if George Costanza is to be believed, Jon Voight.

For a car that sold over 2 million examples, the “wood”-sided Town and Country convertible variant was rare. Chrysler made only 1,105 of them, and this particular example has a claimed 12,345 miles on the clock. The color is gold, Jerry, gold! And given what we known in hindsight about their build quality, you’re not likely to find a better one.

According to its CarFax report, the LeBaron was purchased new in Vermont, where it resided until 2004 when it was sold to a new owner in West Virginia. Five years later, it made its way to a dealer in Utah. It found a new home in that state for nine years before being sold to an owner in Missouri in 2018. The last time it traded hands was only in February 2021, and now that Pennsylvania owner is flipping it for auction.

That auction is RM Sotheby’s Detroit event, which will take place May 5-13. Just remember, if you’re going to claim celebrity provenance, be sure to spellcheck the owner’s names on any accompanying documents.