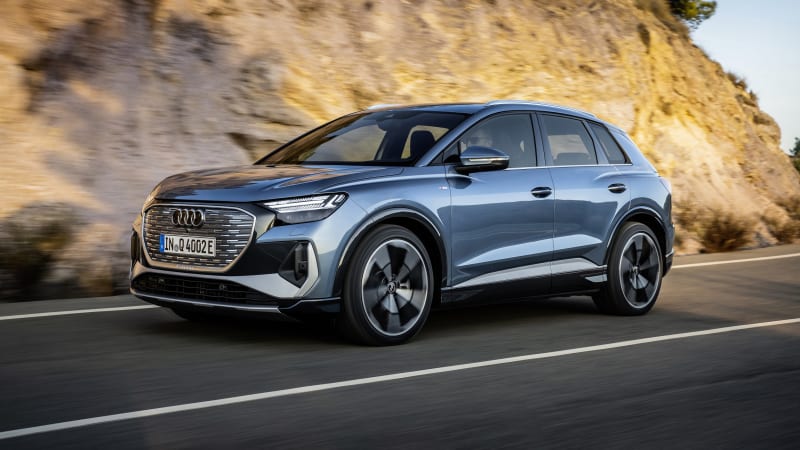 Audi has accelerated its EV offensive by releasing a pair of battery-powered crossovers called Q4 E-Tron and Q4 Sportback E-Tron, respectively. Nearly identical under the sheetmetal, the Q4s will be positioned as Audi’s smallest and most affordable EVs when they arrive in showrooms in a bid to bring electrification to the mainstream.

If the name rings a bell, it’s likely because both models were previewed by the Q4 E-Tron concept unveiled at the 2019 edition of the Geneva auto show. Designers have made several tweaks to the front end over the past two years, they’ve notably fitted bigger lights and a redesigned bumper, but what we saw in Switzerland was very close to what we’ll get in America before the end of 2021. It’s the same story out back, where minor changes set apart the Q4 E-Tron concept and the production model. The Sportback stands out with a fastback-like roofline.

Significantly, the unusual proportions have made the jump from the drawing board to the showroom floor. Going electric allowed Audi to stretch the wheelbase and reduce the size of the overhangs, a layout that maximizes interior space. As we previously reported, the Q4 measures 180 inches long, 73 inches wide, and 63 inches tall, dimensions that make it about as big as a Q3, yet Audi told us its interior space is comparable to the much bigger Q7.

Lighting helps define the Q4’s design, and drivers will have the option of choosing how they’re seen by choosing from four LED daytime running light signatures via a menu in the infotainment system. Motorists in overseas markets will be able to order matrix-beam headlights; Americans won’t get them because they’re illegal, but Audi told us it’s ready to bring the technology to the United States when (or if) it receives the green light from regulators.

Inside, the Q4 offers technology features normally reserved for bigger, more expensive cars. The driver faces a configurable digital instrument cluster and, in some variants, a steering wheel with touch-sensitive surfaces. Audi angled the touchscreen on the center stack towards the driver, and an augmented-reality head-up display is available. It notably uses interactive moving arrows to provide easy-to-understand navigation directions.

Audi built both Q4s on an evolution of the modular MEB platform also found under the Volkswagen ID.4, among other EVs. Using this architecture allows the company to leverage the benefits of economies of scale. Autoblog learned from a company representative that Audi and Volkswagen developed MEB jointly and then individualized it. “While the foundation is the same, beyond that it is very much unique to our brand,” the spokesperson told us.

At launch, the lineup will consist of a base model named Q4 40 E-Tron, which is powered by one rear-mounted electric motor that delivers 201 horsepower, and an all-wheel-drive variant called Q4 50 E-Tron, which gets a second motor and a 295-horspower output. The Sportback will only be offered with the dual-motor system.

Both powertrains draw electricity from an 82-kilowatt-hour lithium-ion battery pack located beneath the passenger compartment. Audi expects the 40 will deliver up to 250 miles of driving range, though the Environmental Protection Agency (EPA) hasn’t tested the model yet. Quick-charging on the Electrify America network will be available.

Built in Zwickau, Germany, the 2022 Q4 E-Tron and the 2022 Q4 Sportback E-Tron will reach American showrooms towards the end of 2021, though no firm date has been announced yet. Pricing for the Q4 will start at under $45,000 before destination and available incentives enter the equation, while the Sportback will cost a little more. Both will join the firm’s growing range of EVs, which also includes the full-size E-Tron and the sporty E-Tron GT.