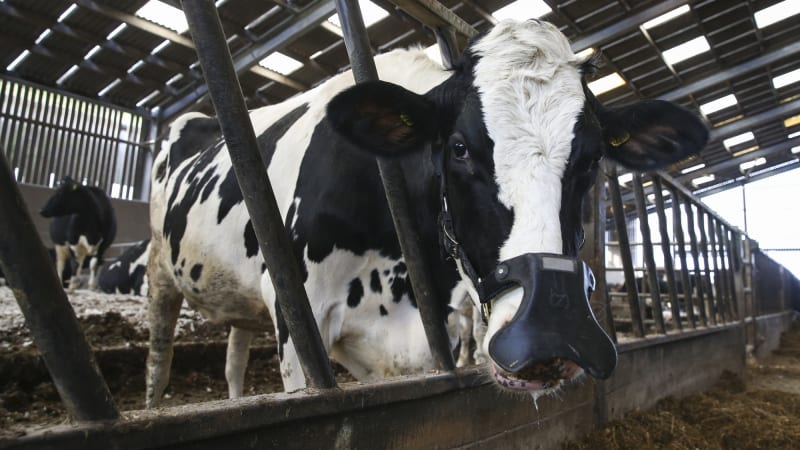 The mask-like accessory was developed by U.K. startup Zelp Ltd., which claims it can reduce methane emissions by more than half. Cargill said Tuesday it expects to start offering the devices to European dairy farmers in 2022. The companies haven’t set a price yet, but Zelp says an annual subscription fee may start at about $80 a cow.

Tackling methane emissions from livestock is one of the most critical — and most difficult — climate issues for meat and dairy companies that are under increasing pressure to clean up their supply chains. Having access to Cargill’s vast customer network could help Zelp secure demand as it prepares to roll out a product that’s still under development.

“Cargill has an impressive reach across dairy farms in Europe,” said Zelp Chief Executive Officer Francisco Norris. “They are uniquely positioned to distribute our technology to a large number of clients, both farmers and dairy companies, maximizing the roll-out from the very first year we hit the market.”

Contrary to the misconception that flatulence is the leading cause of methane from livestock, some 95% of methane released by cows comes out as burps and through the nose. The gas traps 80 times more heat than carbon dioxide in its first 25 years in the atmosphere. Zelp’s wearables, placed above cows’ mouths, act a bit like the catalytic converter on a car. A set of fans powered by solar-charged batteries sucks up the burps and traps them in a chamber with a methane-absorbing filter. Once the filter is saturated, a chemical reaction turns the methane into CO₂, which is then released.

Zelp is working on miniaturizing the technology and optimizing the energy inside the device, Norris said. It’s in talks with a number of potential manufacturing partners and aims to be ready for mass production at the end of the year. It aims to produce 50,000 units in the first year and as many as 200,000 units the next. The company is close to completing its next financing round, according to Norris.

Cargill was attracted to the masks because they can be used in combination with other solutions, said Sander van Zijderveld, the company’s ruminant strategic marketing and technology lead for West Europe. Several food suppliers are testing or have begun using feed additives which inhibit microbes in cows’ stomachs to help them produce less methane.

“The nice thing about Zelp is that it could complement a cow that is already receiving feed additives to reduce methane emissions,” he said. “It could still capture the methane that is coming out. We could reduce it even more.”

Cargill expects the wearables to come on sale in the second half of next year after more testing, which will focus on animal behavior and the impact on methane reduction, and could expand the scheme outside Europe if demand is high. Zelp is yet to prove to independent experts that the technology works. Norris said peer-reviewed studies will take place in the fourth quarter after the product has been fully optimized.

Getting cash-strapped farmers to pay for new technologies has been the key challenge, but that’s changing, said van Zijderveld. He thinks incentives will increase, including more dairy processing companies that are willing to pay a premium for milk produced at farms that meet environmental and animal welfare standards. Farmers could also potentially recoup their costs by selling carbon offsets, which other companies can buy to count against their own pollution.

Cargill, based in Minneapolis, aims to cut emissions from its global supply chains by 30% by 2030. In North America, it targets a 30% greenhouse gas reduction in its regional beef supply chain by the end of the decade.