You know the feeling when you think you’ve finished something brilliant, then you sit down and take a look at it with fresh eyes and realize that, not only is it crap, but it was never really a good idea in the first place? That was me, a couple of weeks ago, as I was looking through the footage I shot while driving the 2021 Bentley Flying Spur V8. Yes, after seeing reactions to the car on social media, I actually thought it would be funny to do a tongue-in-cheek bit where I suggested that Bentley provide owners with a feature designed to help keep “poor” people away.

It was a half-baked idea, conceived to be lighthearted and in a vague nod to British humor. The point was not to make fun of anybody’s financial situation (except my own, in a round-about self-deprecating way), but the product turned out a bit, well, cringe-inducing. Out of selfish desire not to lose the work that went into it (or another opportunity to talk about this gorgeous car), I decided to repurpose it with some help from “Dr.” Byron. As you can see, he’s doing house calls now. 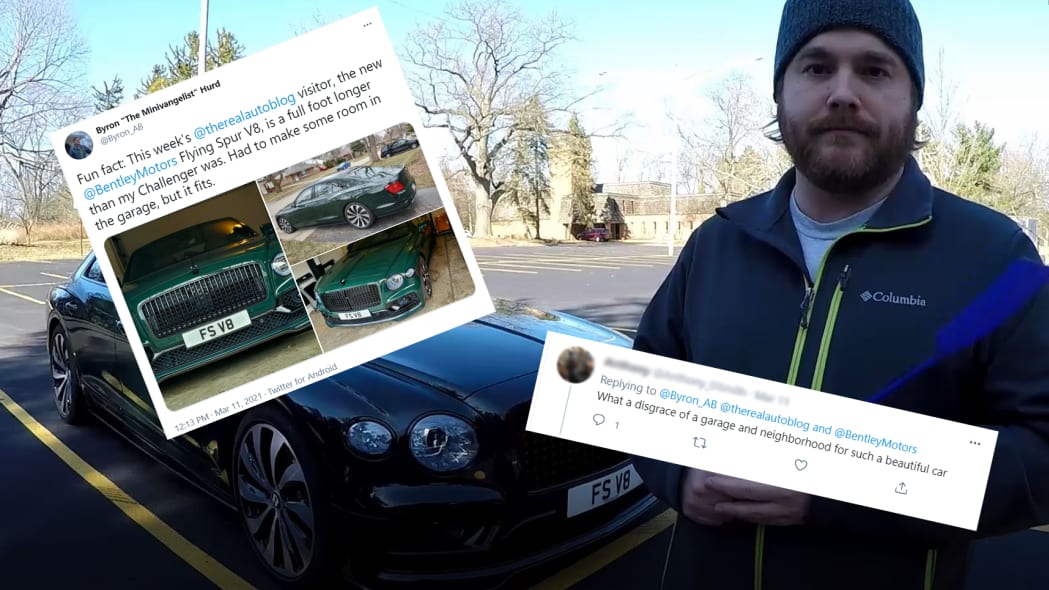 I’ve been reviewing cars for more than a decade now, and even with that much time under my belt, I can still count on my hands the number of truly remarkable cars I’ve had the chance to drive. This Flying Spur stands out as the most expensive, the most exclusive, and, well, pretty much just the most car I’ve ever experienced. As I alluded to in my initial write-up, this is the kind of car that causes somebody like me — a person of comfortably modest means — to rethink even the most fundamental aspects of an otherwise conventional road trip.

Over the years, I’ve had people compliment, degrade and otherwise question my life choices based on cars I barely put 100 miles on. It’s part of the gig. I was once rather directly approached and asked for money while gassing up a 2012 Porsche Cayman; no “hello,” no preamble, no sugar-coating. Just, “Can I have some money?”

It was 11 p.m. in the middle of nowhere on a Tuesday night, and I was out driving because the Cayman was an R model without A/C and we were in the middle of a heat wave, but how do you explain something like that to a mother with her hand out? I had no desire to swat at her, let’s be clear; I merely lacked the means to properly convey the reality of my circumstances without it sounding like a brush-off.

So no, that tweet didn’t actually make me self-conscious about cruising around in such a valuable and exclusive automobile, but the mere act of driving it did, and the discomfort was even further juiced by my knowledge that what I was driving wasn’t even the “expensive” Flying Spur. I found myself wanting to tell people, “Look, you really shouldn’t be that impressed. This is the cheap one.”

The question follows thusly: What is a cheap Bentley, and why does it need to exist? If one can afford a $195,000 Bentley, one can probably afford a $215,000 Bentley. After all, you’re only talking about a 10% markup for the 626-horsepower W12, and when you’re dealing with multiples of six figures, this seems relatively trivial. But if one size truly fits all in this category, why offer another?

Essentially, it boils down to the type of ownership experience you’re looking for. The adage is that you drive a Bentley, but you’re driven in a Rolls-Royce. We can hijack that saying for our purposes by eliminating the Roller altogether and just talking engines. The V8 is the driver’s Flying Spur. Don’t believe me? Here it is, straight from the source:

“While having less ultimate power and torque than a W12, the Flying Spur V8 is, however, slightly more driver-focused,” Bentley told us, “due to the characterful sound of the engine, which is tuned to be more prominent, and the heightened handling feel linked to the weight reduction over the front axle.”

“Some customers also feel the W12 offers more than they need and for whom a V8 is more appropriate. The fact that it has a slightly more accessible price point than a W12 is, as you observed, a relatively small detail as the gap is not huge. The choice really comes down to personal preference – ultimate power and torque, delivered in a super-refined and discreet way, or a more overtly sporting character.”

“Discreet” is probably pushing it. As I learned firsthand, you’ll have no shortage of attention (wanted or otherwise) in the Flying Spur, regardless of the engine you choose, but I do buy the notion that, for a subset of buyers, a conscious choice to mitigate consumption (or at least make a show of doing so) could be worth the tradeoff in power. Personally, I think I’d still go for the W12. In fantasyland.