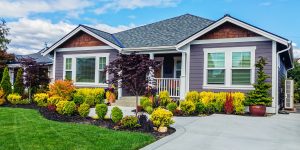 At first glance, Cove is almost like a carbon copy of SimpliSafe—particularly with its pricing and equipment. But Cove’s RapidSOS monitoring changes things. Unlike monitoring centers relaying information to emergency responders over the phone, RapidSOS shares vital information (location info, medical needs) directly with 911 dispatchers’ computers. This speeds up communications and makes it easier to send an appropriate response to your home.

The biggest difference in the Cove security system is a sleek touchscreen control panel that’s a bit more attractive than SimpliSafe’s keypad. The large screen is great for folks that might have trouble reading a smaller print, though it doesn’t have tactile buttons that are easier to use without looking at the screen.

We also like Cove’s wire-free outdoor security camera, which uses rechargeable batteries for maximum installation flexibility. Recharging the batteries every few months may be a chore, but it’s a nice step up from SimpliSafe’s indoor-only security camera.

Cove Smart also sells a smoke and carbon monoxide detector. It’s almost twice as expensive as SimpliSafe’s smoke detector, but the ability to spot CO gases justifies the higher price. Still, it’s a bummer that Cove lacks a smart lock and doorbell camera. Although Cove has an optional contract, it covers only the equipment costs and doesn’t require payment of any monitoring fees when you cancel.

While the warranty on Cove’s cheaper plan doesn’t compete with SimpliSafe, it ups the ante with a lifetime warranty when you upgrade to the $24.99 monthly plan. This means that you can replace defective equipment after three years (as long as you properly maintain it before it breaks).

Cove excels with its monitoring, especially the RapidSOS system that streamlines communication when calling for help. Still, its equipment selection lags behind SimpliSafe’s. Learn more about Cove’s unique monitoring features in our full Cove review.