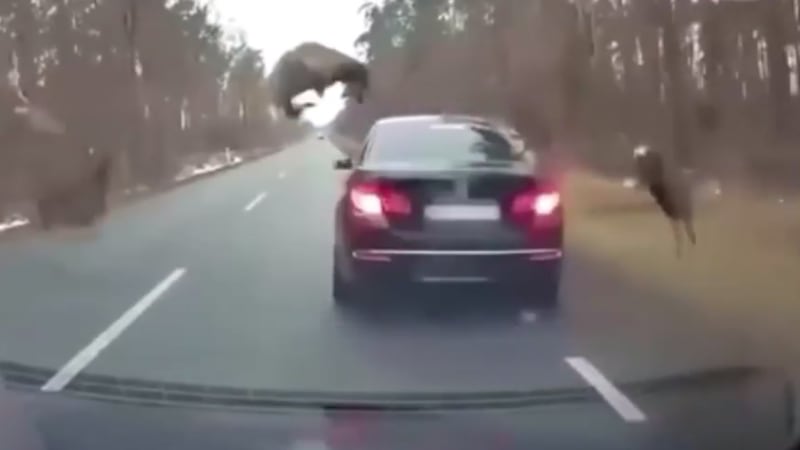 As if we needed another reminder to keep our eyes on the road, a herd of deer demonstrates just how much havoc can be wreaked in a split second. Leaping ungulates recently darted right in front of, over, and on top of an innocent BMW 5 Series merrily traveling down a wooded road, and it was all captured on dashcam.

We came across this video from the Oakland County Sheriff’s Office’s Facebook page. The footage shows a black Bimmer driving through a remote, forested route. Suddenly, a group of deer jump out from the trees ahead of the car, prompting the driver to slam on their brakes and swerve into the shoulder. Despite the BMW’s strong brakes, there’s still enough momentum from the 4,000-pound sedan to carry it into the river of Bambis.

We’re sure the deer were just as perplexed. “What is up with this a large steel object suddenly plowing into our procession? We’re running ova here!” Luckily, white-tails can jump, and one surges straight up, landing on the roof of the BMW and bounding off into the forest like nothing ever happened. Another one isn’t so fortunate, landing on the trunk and sliding off back towards the direction is came from. Hopefully it found its friends later.

The action was recorded on the dashcam of a vehicle following the BMW. Reportedly, no animals, hoofed or human, were injured. However, we do have to applaud the quick reflexes of the BMW driver, though we’d probably be pretty on-alert if we were driving a BMW ahead of a police car on a lonely road as well.

So the lesson here, kids, is only buy cars that have good brakes and sharp handling! No, wait, it was keep your eyes on the road. But also, buy good cars too.