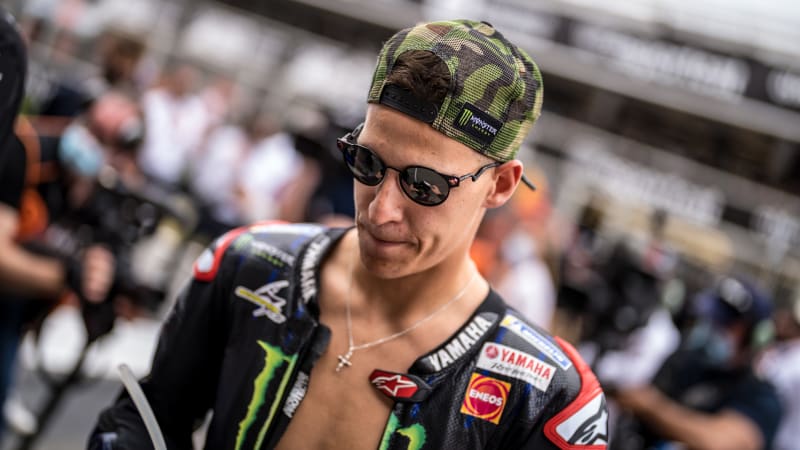 Fabio Quartararo, who races alongside Maverick Vinales for the factory-backed Monster Energy Yamaha MotoGP team, found himself with an unzipping set of racing leathers toward the end of last weekend’s Catalunya Grand Prix at Barcelona. He was seen discarding the chest protector riders wear under their leather suit during the 21st lap of the race, which left his bare chest open to the elements. He was apparently unable to zip the leathers back up, so he ended up crossing the line in third place with the upper part of his suit flapping in the wind.

Quartararo received a penalty for exceeding track limits on lap 22, and later received another three-second penalty after the race was completed for breaking section 2.4.5.2, which is titled “Rider’s Safety Equipment,” of the FIM MotoGP regulations. The rule clearly states that “equipment must be worn, correctly fastened, at all times during on-track activity.” He officially earned a fourth-place finish after his penalties were assessed.

There’s a very good reason MotoGP riders wear a full complement of safety gear during a race. These high-performance machines can surpass speeds of 200 miles per hour — the most recent record was set in 2020, when Francesco Bagnaia powered his Ducati to nearly 219 mph — and a crash at those speeds would tear an unprotected rider to shreds.

The race was won by KTM’s Miguel Oliveira, who finished ahead of the Ducatis of Johann Zarco and Jack Miller in a tight battle.