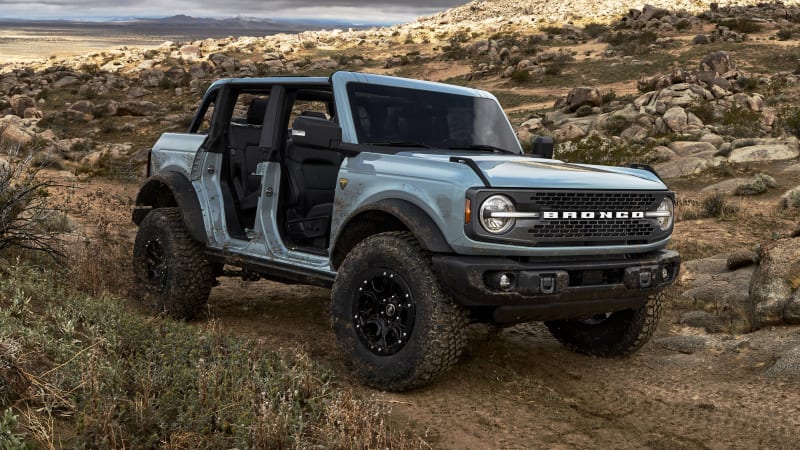 Final horsepower figures and fuel economy numbers for the 2021 Ford Bronco surfaced this week. Thanks to a couple of suspiciously convenient leaks, we now know that the 2.3-liter turbo-four will top out at 300 horsepower and offer up to 21 mpg combined, while the thirstier (and punchier) 2.7-liter turbo V6 will offer up to 330 ponies and 19 mpg combined.

Those power figures come courtesy of the Bronco6G forum, which managed to dig up an updated spec sheet for the 2021 Bronco showing final horsepower and torque figures that are up quite a bit from what Ford suggested when the 4×4 debuted nearly a year ago. The base turbocharged four-cylinder is now rated at 300 hp and 325 pound-feet of torque. That’s 30 more horses and 15 more pound-feet than the initial claim. As for the twin-turbocharged V6, the numbers stand at 330 horsepower and 415 pound-feet — increases of 20 horses and 15 pound-feet.

It’s worth noting that those numbers were recorded using premium fuel. As the sheet notes, using 87 octane fuel will result in lower output. The four-cylinder drops to 275 horsepower and 315 pound-feet of torque, while the V6 will make 315 horsepower and 410 pound-feet on regular.

On the fuel economy front, there really aren’t any surprises. The numbers come care of Bronco Nation, which is a semi-official mouthpiece for the Bronco brand. Per the advanced copy of the fuel economy figures received by BN, the four-cylinder is good for up to 20 mpg city, 22 mpg highway and 21 mpg combined, while the V6 tops out at 18/20/19. The exact numbers vary by trim, and are broken down in BN‘s write-up.

For comparison, the 2021 Jeep Wrangler — the Bronco’s chief rival — offers a 2.0-liter turbocharged four-cylinder making 270 hp and 295 lb-ft which returns up to 22 mpg city, 24 mpg highway and 23 mpg combined. Jeep’s 3.6-liter Pentastar V6 makes 285 hp and 265 lb-ft, with peak fuel economy figures of 18/23/20. Jeep offers models with more torque and better fuel economy (or both, in the case of the 3.0-liter EcoDiesel and the plug-in hybrid 4xe, which is basically a segment trump card), but it’s difficult to compare them directly to the Bronco’s initial engine offerings.