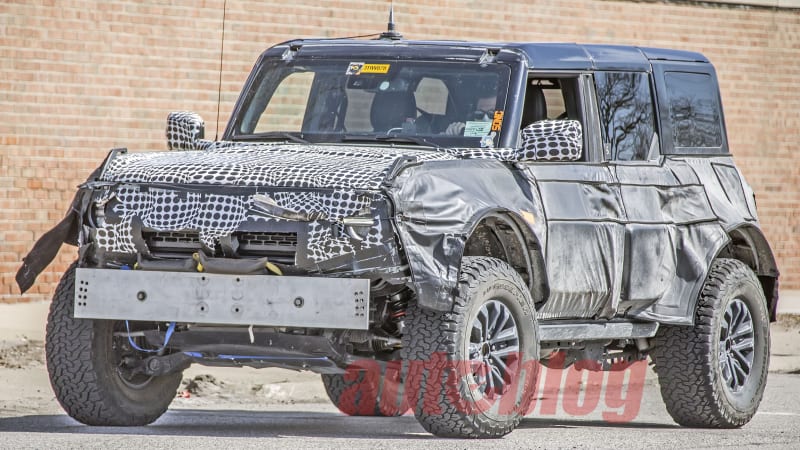 A new round of spy photos of Ford’s upcoming Bronco performance variant (expected to be named Warthog) hit our inboxes Monday. Thanks to a set of “bumpers” designed for attaching rigs used for roll-over testing, we’re getting our best look yet at the halo variant of Ford’s new 4×4.

The rather elaborate camo still clinging to the Bronco’s flanks makes it difficult to gauge the true proportions of the truck underneath, but we at least now have a better idea of how far out Ford plans to push the Warthog’s fenders. With elements of the disguise in the front and rear removed to allow for the mounting of these test bumpers, we get our first glimpse at some of the underlying bodywork, which appears to be surprisingly complete. We can see part of the grille (though there’s a chance it won’t be the only one) and a good bit more of the front suspension than we’ve seen previously.

The chunky front coil-overs are far more substantial than what we’ve seen on the base Bronco or Ranger Raptor (including next-gen prototypes) and the lower control arms visible here are likewise beefed up significantly over what we’ve seen on either cousin. While it may seem odd on spec that this prototype is beefed up in relation to the Ranger Raptor, bear in mind that the base Bronco’s chassis and suspension are already as robust as the pumped up Ranger’s, so it follows that the Warthog would be yet another tier above that.