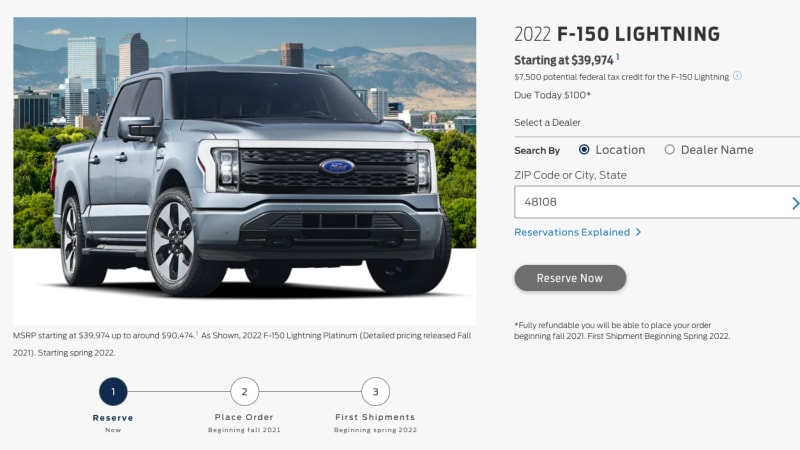 Ford opened up reservations for the 2022 F-150 Lightning last night as it revealed the truck, and it looks like a lot of people were paying attention. Automotive News took notice of a CNBC television report where CEO Jim Farley announced that Ford received approximately 20,000 reservations in the first 12 hours of the portal being open.

To place a reservation, potential buyers had to navigate to Ford’s reservation site and put down a $100 refundable deposit. That secured a place in line, but reservation holders will have to convert their reservations to orders later this year. For comparison, Tesla claimed it received about 250,000 reservations for the Cybertruck within 5 days of revealing it — the reservation price was $100, just like the F-150 Lightning’s. It’s also worth noting that it’s been nearly a year and a half since the Cybertruck was revealed, and the truck still appears far from production. Ford plans to ship the F-150 Lightning to customers in spring 2022.

Farley also mentioned on CNBC that Ford would limit the total production number in the first model year, but he didn’t give a number. The Mustang Mach-E received the same treatment for this 2021 model year, and it was limited to 50,000 cars. The F-150’s popularity will likely result in a higher limit than the Mach-E’s, but Ford hasn’t divulged that information just yet.

You can get the full download on everything F-150 Lightning-related in our master reveal post here. If you’re interested in joining the parade of people who have put down reservations, Ford’s estimated pricing ranges from about $40,000-$90,000. The entry-level base truck is of the work truck variety, and the first consumer-oriented truck is the XLT trim that starts at $52,974.