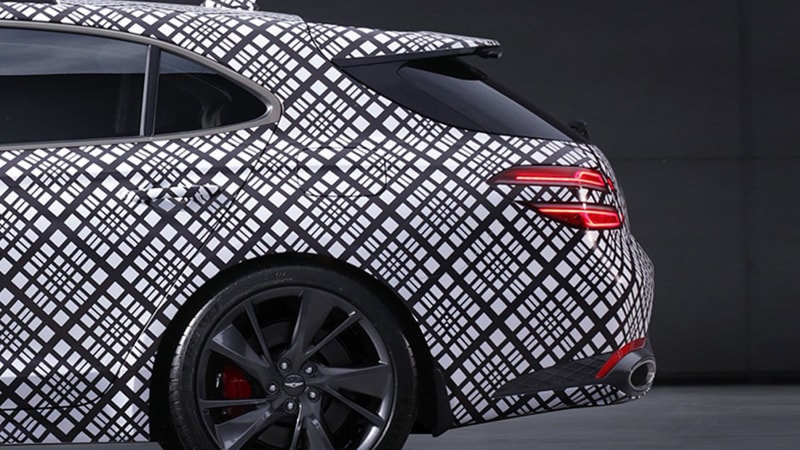 We’ve known for a little over a year that Genesis has been toying with the possibility of a G70 wagon or shooting brake. Early last year the company said as much, and the following summer a prototype was caught by one of our spy photographers. But now the car is official, as the European division of Genesis released teaser shots of the long-roof G70, giving us our best look yet.

The design is low and sleek, as we would expect from the company that has given us such brilliant concept designs as the recent X and slightly older Mint and Essentia. From the B-pillar forward, it’s mostly the same as the refreshed G70 sedan, but moving rearward, we see a number of changes. The rear door glass has a lower sill and the top bends farther down to meet it. This makes some extra room for wraparound rear glass. Though extended, the roof still stays low and tapers toward the rear, and it’s accentuated by a rear spoiler. Interestingly, the car doesn’t appear to be much longer than the sedan.

Genesis hasn’t given exact timing for when the G70 wagon will go on sale, but we would imagine either late this year or early next year. The brand is only just launching in Europe this year, and the first models on sale will be the G80 sedan and GV80 crossover in the summer, followed by the G70 sedan and GV70 crossover a little after. We also suspect the G70 wagon will only be offered in Europe, in part because it was announced by the European division. Certainly, Genesis and its parent Hyundai aren’t afraid of trying low-selling models in America, as the now-discontinued G70 with a manual transmission showed. But the wagon would have the additional obstacle of the GV70 crossover, which should be far more popular and fill a similar niche in America.