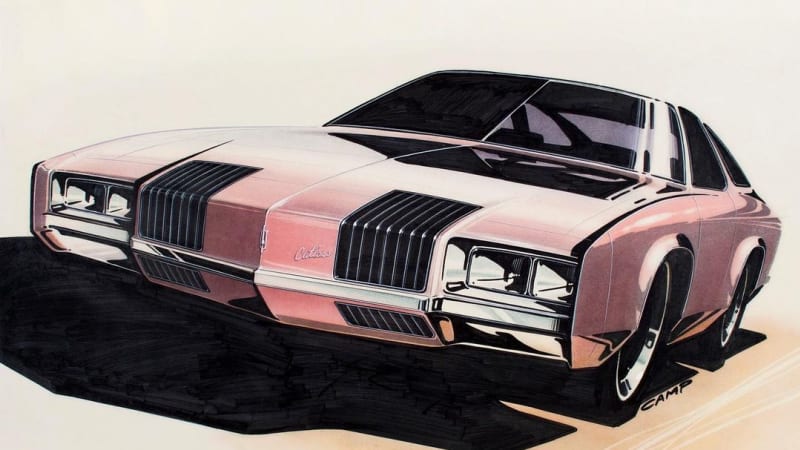 We periodically like to check in with GM Design’s Instagram account to see what they’re cooking up. Even better is when we catch a glimpse of an alternate history of what legendary designers from The General’s past were thinking, though those ideas may not have made it into production.

This week, for example, the account posted some illustrations from George Camp, whose career at GM spanned nearly four decades, from 1963 to 2001. One of the renderings is of what appears to be a 1971-72 Pontiac GTO Judge, but with two headlights instead of the production unit’s quad beams. The rear departs from the canonical version most dramatically, with a massive integrated wing.

Other bits that didn’t make the production cut include large side vents, a gill-like side marker and rectangular intakes below the headlights that wouldn’t be out of place on a modern design today. Amazingly, from what we can make out of the date, it appears that the drawing was done sometime in 1965, which makes it quite prescient.

There’s also a very aerodynamic interpretation of a Corvette ZR-1. To our eyes it splits the difference between the 1986 Corvette Indy concept and a fourth-generation F-body Pontiac Firebird, so perhaps parts of Camp’s work on this sketch did make it into physical form.

There’s also a radical sports car concept from May 1970 that resembles the Mazda RX-500 concept from the same year, a Syd Mead-looking Cadillac coupe, and an Oldsmobile with a cool take on the company’s trademark waterfall grille and elements of the Colonnade Cutlass at the rear.

Other recent posts include a FJ Cruiser-like off-road EV, a sleek coupe with the Chevy corporate grille, and a rendering of a Silverado-esque pickup that looks far better than the current production version.

It’s pretty easy to lose hours in the account, but it’s always fascinating to see GM’s visions of what could have been and what might be.