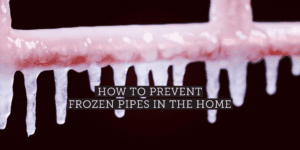 Homeowners everywhere from Alaska to Texas, need to consider the risks of frozen pipes in their homes. Water damage and freezing claims were the second-most frequent type of claims filed in the United States between 2014 and 2018, with about one in 50 insured homes making a claim each year.

Homeowners who file these claims lose an average of nearly $11,000, and unfortunately the cost of these claims is rising—growing over 37% between 2014 and 2018.

Though these are worrisome statistics, you can avoid frozen pipes and water damage claims by learning how pipes freeze, taking preventative action, and investing in some tools.

Though water freezes at thirty-two degrees Fahrenheit, pipes act as a barrier so water inside them generally doesn’t freeze until it is below twenty degrees. Pipes with little or no insulation could freeze when the outside temperature dips under twenty degrees.

Water expands as it freezes, which is troublesome for pipes. As the water freezes along the length of the pipe, pressure increases between the ice and a closed endpoint, such as a faucet or washing machine hose. The pressure can grow too large for the limited space to handle, which results in a pipe bursting.

Homes in the southern and western regions of the United States tend to be more prone to freezing and water damage than homes in the northern region, which are often built to withstand arctic blasts.

Because southern homes sometimes feature less insulation—and the pipes leading to the home aren’t always housed as far below ground—they are at greater risk for water damage.

No matter where you live, these four types of pipes tend to be the most vulnerable to freezing.

There are other areas in homes that are susceptible to freezing, as well. The connectors and hoses on washing machines, dishwashers, and water heaters are vulnerable to freezing as they can become brittle and break. Sinks and showers also pose potential hazards.

Outside, spigots, sprinkler systems, and swimming pool lines might not be as well insulated as indoor plumbing and could be the first points to collapse during a hard freeze.

It’s important to take precautions whenever the outside temperature is near freezing—temperatures can change overnight, and wind chills leave pipes vulnerable to freezing and bursting. To prevent frozen pipes in the home, you first need to know what kind of pipes you have.

If your home uses copper or galvanized steel pipes, make sure they don’t need to be replaced as they are subject to erosion and corrosion. Polybutylene pipes—commonly installed in homes fifteen to forty-five years ago—are especially prone to failure and should be replaced immediately as they no longer meet US building codes.

However, you won’t need to replace pipes most of the time, particularly if you take the following measures every fall:

1. Drain, remove, and store outdoor hoses to keep them from becoming fragile or posing tripping hazards after a snowfall or freeze. Also drain water from outdoor lines, such as those connected to swimming pools and sprinklers.

2. Open outdoor hose spigots but close the inside valves that supply them with water. This process causes the water to drain and, in the event of a freeze, to expand without bursting a pipe. If you are going on an extended vacation, turn off the water to the home and open all the faucets to drain any water remaining in the pipes.

3. Insulate water supply lines and pipes in the garage, basement, attic, and other unheated areas with foam, heating cables, or pipe sleeves. Do the same for pipes under kitchen and bathroom sinks.

4. Make sure your home is enclosed and insulated. Find and seal any cracks, drafts, and holes in the home’s exterior. Even small openings welcome in cold air, which impacts pipes and heating bills. Enclose crawlspaces and insulate the attic. The added layer of insulation keeps warm air in and cold weather out. Close the garage door to keep heat inside, especially if it closets water supply lines, the water heater, or a washing machine.

5. Keep the thermostat at a consistent setting—no lower than fifty-five degrees Fahrenheit—during the day and night, and when you’re on vacation. You might see a higher utility bill, but it will be cheaper than water damage costs.

7. Let hot and cold water trickle through your pipes during frigid nights to help prevent them from freezing.

8. Find a local plumber. In the worst-case scenario, you should have the number of a trusted plumbing professional on hand.

If the pipes freeze, you might be tempted to head to the nearest hotel for some running water, but don’t be hasty. Follow these steps to keep a freeze from becoming a disaster:

1. Shut off the main water valve.

2. Call a plumber if the frozen pipe is in an area you can’t reach—like underground or in an interior wall.

3. Use warm air to help thaw the pipes if you can access the frozen pipe. You can use a hairdryer, heat tape, or a space heater, but don’t leave it unattended—it could catch fire.

4. Slowly turn the water back on, watching for leaks. You may need someone to assist you with this step.

5. Repeat steps three and four if the water doesn’t resume flow right away.

If a pipe bursts before you are able to thaw it, immediately shut off your water to prevent a flood. Mop up any mess you can reach and contact a plumber. Once the plumber assesses the damage, get started on an insurance claim.

You don’t have to face frozen pipes alone. The following  products can help you prevent frozen pipes and protect pipes against bursting.

Pipes freeze all the time, but they don’t have to. If you use these tips, tricks, and products, we hope you’ll never have to file a water damage or freezing claim.