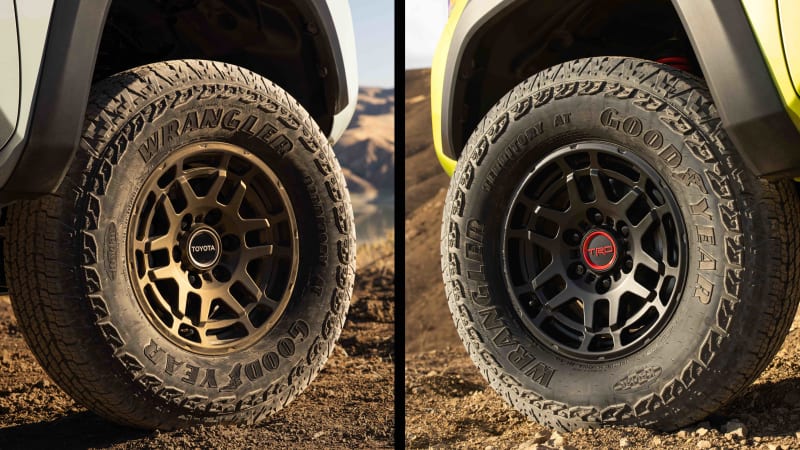 Toyota has released a teaser image of two 2022 Tacoma variants. Precious little information accompanied the image, but one of them is likely the next Tacoma TRD Pro. If so, it would likely mean that the 2022’s exclusive TRD Pro color will be electric yellow.

“Two new adventure-ready trucks are on the horizon,” the caption vaguely states. However, even though we’re presented with only to close-ups of wheels and tires, we can extrapolate.

TRD Pro wheels have typically been finished in matte black and been characterized by a chunky design like the ones shown here. Even though the design differs from those on past TRD Pro Tacomas, the TRD center cap and matte black finish on the wheel paired with the yellow truck point to a TRD Pro edition.

Next come the tires, which are Goodyear Wrangler All-Terrains in 265/70-R16 size. That’s the same brand and size of tire that TRD Pro Tacomas have use previously. For the record, different TRD Pro models use different tire suppliers. TRD Pro Tundras are equipped with Michelins and TRD Pro 4Runners come with Nittos.

Lastly, TRD Pro colors have typically been drastically different from the rest of the Toyota lineup. Each year offers a new single-year exclusive hue that’s unique to the TRD Pro line, unifying all the TRD Pro models like the Sequoia, Tundra and 4Runner, and not available on non-TRD Pro trims. The line debuted with a bright orange called Inferno, had past years have featured colors like Voodoo Blue, Army Green, Quicksand and last year’s grayish-green called Lunar Rock.

Yellow would definitely be a departure, and the first TRD Pro color since Inferno that could not be had on another Toyota model. Many of the colors were discontinued FJ Cruiser paint codes, and Lunar Rock was initially offered on the RAV4. Some of these colors have filtered down the non-TRD vehicles after their initial debut.

The bigger question is the second truck teased. It’s clearly wearing the same tire and wheel, even though it’s not branded TRD. The body also seems to be riding about an inch higher than TRD Pro. That’s definitely got our interest piqued, but until Toyota reveals more this is all we’ve got.