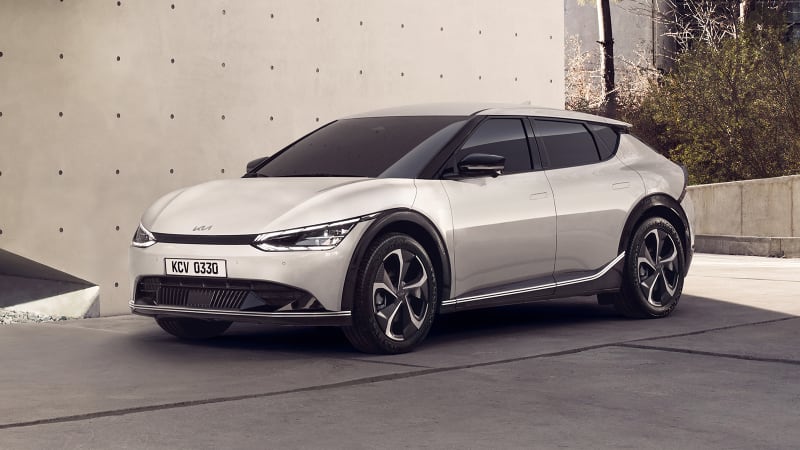 The Kia EV6 electric car has finally been revealed. It’s the first Kia to use the E-GMP platform, like the Hyundai Ioniq 5. It looks dramatically different from that car, though we have yet to know if the specifications will differ much.

While the Ioniq 5 has a relatively conventional and very angular hatchback shape, the Kia EV6 has a curvy, coupe-like shape. The nose is wide and blunt with a grille and headlights that wrap around the leading edge with a slight scowl. The roofline is low, as is the hatchback, with a window sill that rises rapidly into a thick rear pillar for aggressive coupe profile. The rear has unique, thin taillights that span edge to edge, and the angles of them match the angles of the side sills.

The inside looks like a more streamlined and minimized version of the Kia K5‘s interior. The instrument panel and infotainment screen are fitted in one wide monolith on top of the dash. That dash is low and simple with full-width air vents. The car also has a floating center console that looks like it probably slides like the one in its Hyundai sibling.

Unfortunately, Kia hasn’t said anything about motors, power and battery capacity. We’re expecting it to match the specs of the Ioniq 5 with single-motor, rear-drive and dual-motor, all-wheel-drive versions making either 215 horsepower or 302. It will probably be offered with a base 58-kWh battery and a long-range 77.4-kWh battery. We also don’t have an on-sale date, but that will probably be sometime this year.