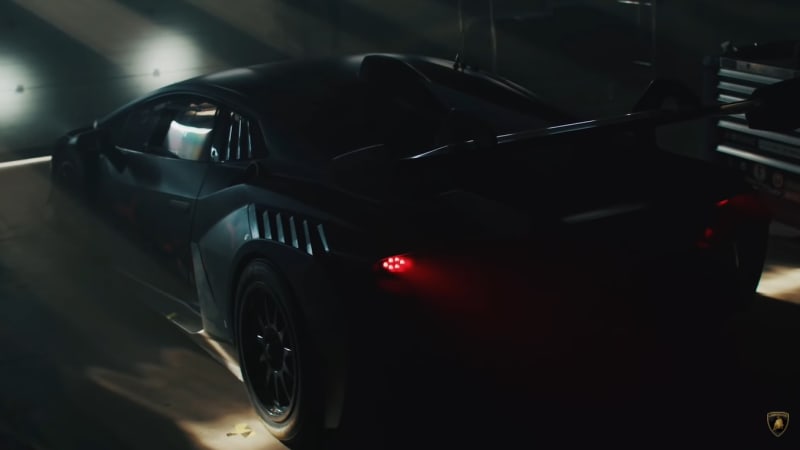 Lamborghini’s racing division, Squadra Corse, is preparing to unveil its second standalone model. It published a short video that gives us a visual and audible peek at the car, which looks like an evolution of the Huracán.

We’re not quite sure what the second Squadra Corse car is powered by, and we have no idea what it’s called, but we can already tell it will look more menacing than any of Lamborghini’s regular-production models. Posted on YouTube, the 32-second video shows enough of the track-bound coupe to whet our appetite. It’s considerably wider than the Huracán, much lower, and fitted with a specific body kit that includes vents chiseled into the quarter panels, a huge wing, and an intriguing periscope that presumably channels cooling air to the engine bay.

The silhouette and the proportions hint at the Huracán underpinnings, though nothing is official yet and a majority of the exterior parts look newly-developed. The bigger Aventador is near the end of its life cycle, its successor is expected to break cover in the next 12 months, and it already received the Squadra Corse treatment in 2018.

Squadra Corse’s involvement suggests we’re looking at a Lamborghini developed exclusively for track use, and footage of the interior supports this theory. Instead of an instrument cluster, the driver will face a screen that presents key information about the car and its surroundings with a simple, easy-to-read layout. There’s a full roll cage, too, and the side windows have been replaced with Plexiglas units to keep weight in check.

Lamborghini hasn’t announced when it will unveil its Squadra Corse’s next new model, but the unveiling will almost certainly take place online. We’re guessing production will be strictly limited, and it’s not too far-fetched to speculate every build slot will be spoken for by the time we see the car in the metal in spite of a six- or seven-digit price tag.