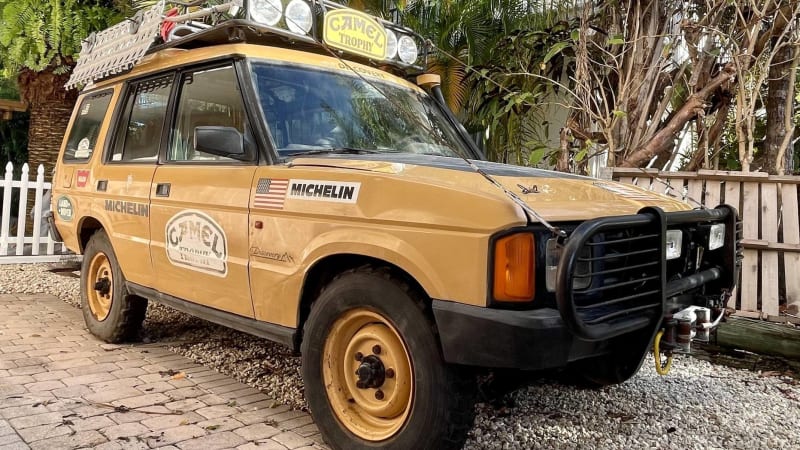 There are a lot of built Land Rover off-road rigs, but this 1992 Land Rover Discovery has a pedigree that they cannot match: It actually competed in the Camel Trophy as a factory works entry for the U.S. team. And this piece of off-road history and 4×4 cool is up for grabs right now on Cars & Bids.

Although it was the U.S. team entry, this 1992 Discovery is a Euro-spec model powered by a 2.5-liter turbodiesel four-cylinder backed by a five-speed manual transmission. Of course, it has four-wheel drive and a two-speed transfer case. Modifications made in preparation for the event include a front push bar and winch; heavy-duty springs and shocks; skid plates; upgraded half-shafts; breathing tubes for the axles, transfer case, and transmission; and a giant roof rack full of recovery gear. It also had a roll cage installed and the A/C deleted — the latter is one modification the participants must have been questioning in the sweltering jungles of Guyana.

Speaking of participants, one of the drivers, Jim West, has already appeared in the comments. He says that the Discovery at one point spent the night in the Gunnison River. That’s a reminder that although this Discovery has just 29,700 kilometers — approximately 18,500 miles — those miles were tougher than those racked up on the more typical school run and shopping errands. Indeed, the vehicle description notes that the engine smokes under initial acceleration, the tires are dry-rotted, and the brakes are soft, among other flaws.

To get a glimpse at what these vehicles went through, and what they’re capable of, check out the video below: