Taking a left turn off of I-10 outside of Palm Springs, California, we drove down a rutted, sand-blown track for a couple miles before ending up at a tall, rocky pile, an outcrop scaled somewhere between a hillock and a massif. After shifting the transmission into neutral, engaging the four-wheel-drive low range, and closing the ARB Air Locking differentials, we got even and steady on the throttle and pointed our truck—a seven-figure, one-off, overlanding concept known as the Lexus J201—up the steep, rocky face until all that showed through the windshield was dust and searing sky.

The truck handled the challenge with marked aplomb, cresting the ridge without a huff, and eventually leveling off and displaying the glories of what was on the other side: a meth lab. So capable was this vehicle that it was easy to forget that the platform that underpinned all of this ruggedness was Lexus’ posh, flagship SUV, the $88,000 LX 570. This jacked and tracked truck begs the question: Has Lexus gone rogue?

“Going rogue is actually part of who we are,” says Vinay Shahani, the brand’s vice president of marketing for America. “And we love to experiment. J201 is a rolling example of our belief in Always On, the idea of continual improvement no matter the time in a vehicle’s lifecycle.” 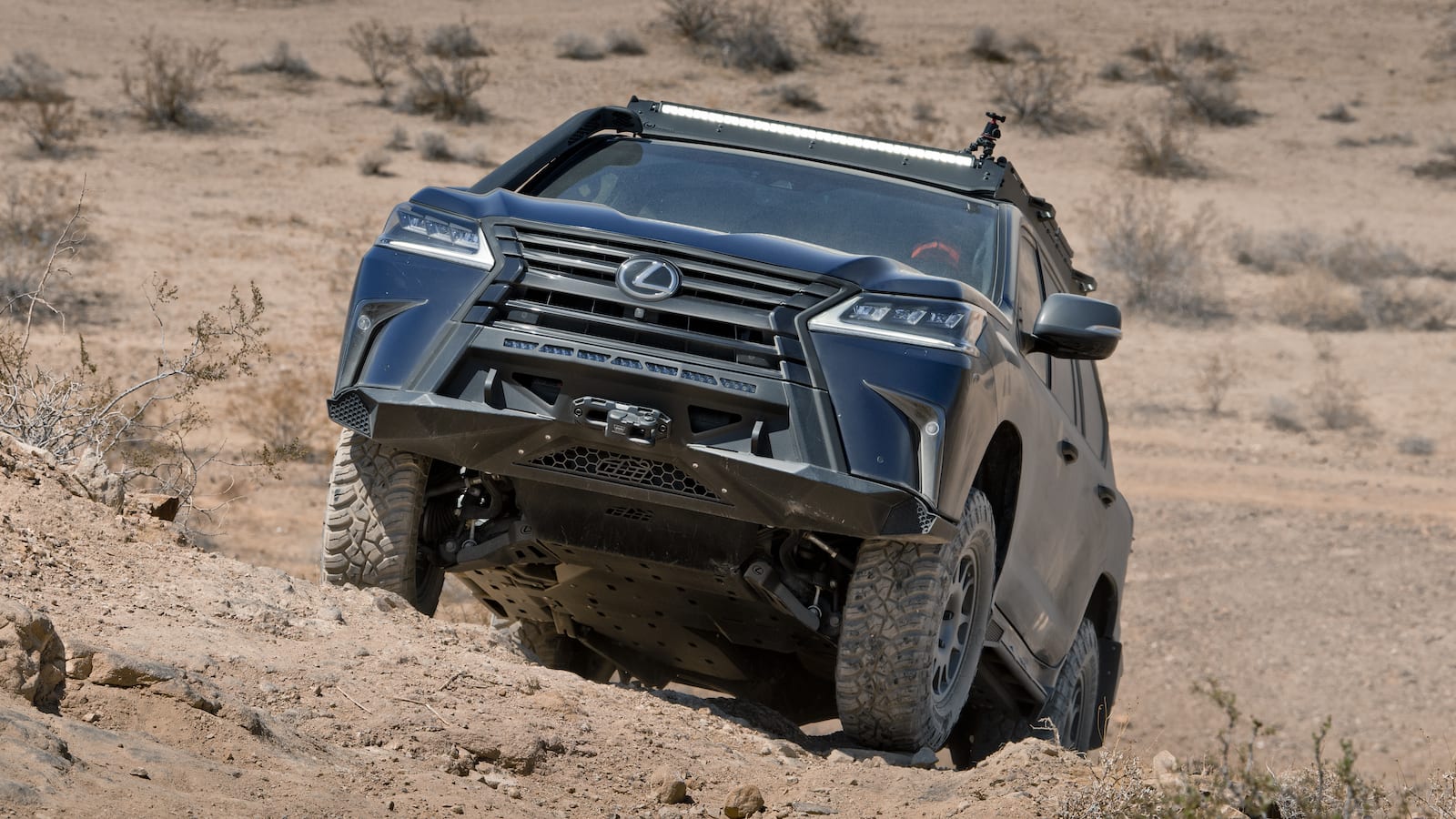 The reference to time-in-lifecycle is kind of an understatement for a vehicle that has existed in its current form, with only minor cosmetic updates, since 2008 — two lifetimes in the product span of most automobiles. But the J201 Concept does add significant upgrades to the production vehicle, which, based as it is on the venerable and caprine Toyota Land Cruiser, is hardly a slouch in the off-road-capability department.

In addition to the performance differentials mentioned above, the J201 benefits from a myriad of additional add-ons. These include rugged accessories such as an Icon Vehicle Dynamics suspension good for a few extra inches of ride height, and even more when the suspension is put in extreme high mode; smaller 17-inch Evo Corse Dakar Zero wheels mounted with 33-inch General Grabber X3 tires; a TJM Airtec snorkel for breathing underwater (something we did not get to experience in the parched Coachella Valley); and StopTech drilled brake rotors. It also includes bolt-ons such as CBI skid plates, rock sliders, and front and rear bumpers; a Warn winch; a Prinsu Design roof rack system; an onboard ARB twin compressor; and luminescence of Rigid Industries light bars.

Perhaps most importantly, it includes a Magnuson supercharger bolted to the standard 5.7-liter Toyota V8 — the same unit that was available from Toyota Racing Development (TRD) in the Tundra some years back. This strapped-on blower upgrades the standard 383 horsepower and 403 pound-feet to a ripping 550 hp and 550 lb-ft. However, after tasting the whine, we can say that the addition of 167 horses doesn’t exactly transform the behavior of the J201, in part because all the rugged add-ons bolted to its front, rear, rockers, and roof are seemingly made of cast iron and add approximately an extra 1,000 pounds, give or take, to the base three-ton weight.

Still, the additional ponies do provide more than enough push for the truck to get out of its own way, so long as you’re not demure with the gas pedal. That’s in part because this truck retains the LX’s tranquilizing eight-speed automatic, which is programmed for leisure and fuel economy. (“Economy” of course is relative, as the EPA rates the stock LX at 12 mpg city, 16 mpg highway, and 14 mpg combined. We’re certainly didn’t crest the double-digit threshold.) 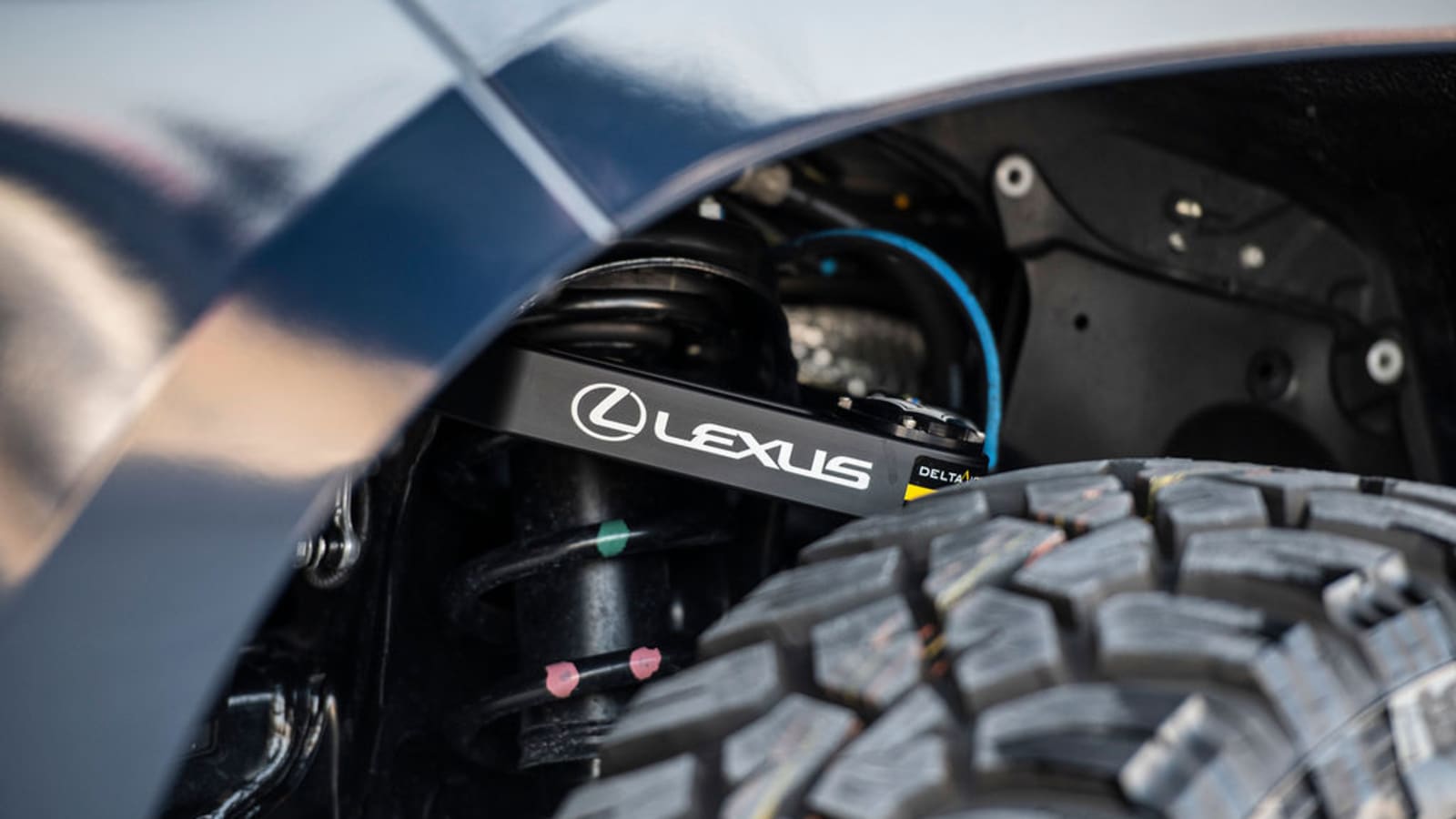 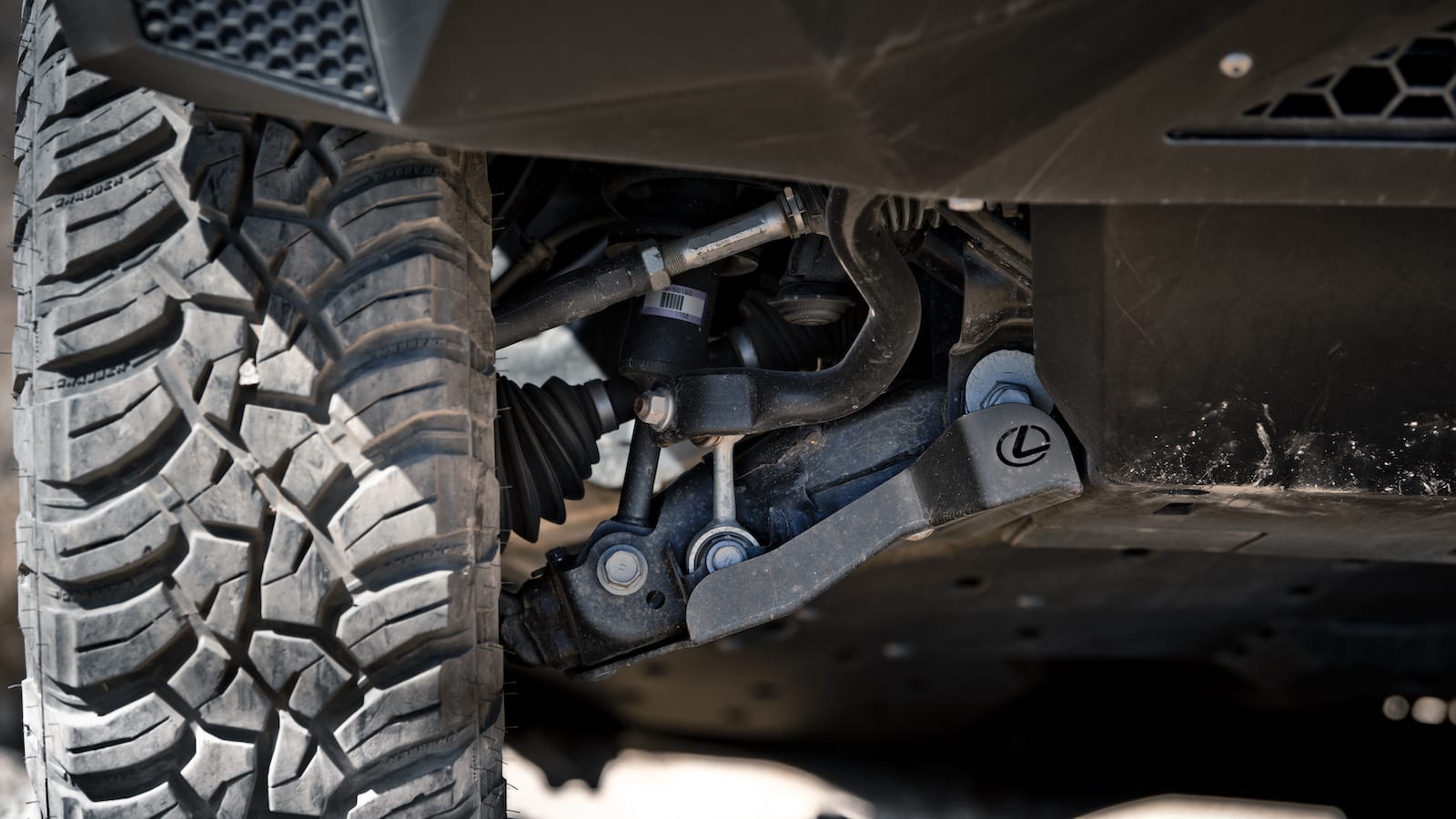 Capable as they might be traversing the desert sand pack, the J201’s monster tires don’t add much to on-road refinement or quietude, long a Lexus hallmark. They also tend to follow even unseen roadway imperfections, like a polar bear tracking the miles-away scent of an icebound seal. It probably didn’t help that we were in the notoriously windswept Sonoran desert piloting something with the drag coefficient of an upright Steinway.

But this J201 does look pretty radical. During a daylong drive through Joshua Tree National Park, we spotted at least a hundred rigs outfitted for overlanding, and while very few of them seemed to actually be heading further off-road than an Instagram-ready gravel pull-off, there wasn’t a single other modified, late-model LX570. And there certainly wasn’t another one that had been massaged by the factory, using parts that wouldn’t void the warranty. The elimination of the lower half of the ghastly Lexus “spindle grille” certainly helped in the appearance department, though the SUV’s inflated scale, narrowed eyes, sea blue vinyl wrap, and baleen upper air intake did give the J201 a slightly porcine/cetaceous presence. No wonder the Lexus folks had nicknamed this build Buta Kujira, which translates roughly to Whale Pig.

The real question about this build is what Lexus means to enunciate by creating a vehicle like this, aside from inciting a 404: Page Not Found error for just about every potential or existing customer. Mercedes-Benz and Land Rover have credible reputations for building intensely off-road-capable luxury vehicles. And Lexus’ parent company, Toyota, has garnered similar status in building Hi-Luxes, Tacomas, and Land Cruisers (the vehicle on which the LX 570, and J201, is based) that are rugged enough for both the United Nations and the radical insurgent armies the UN is often brought in to corral. But Lexus seems to jibe with the overlanding subculture about as well as split-pea-with-ham soup flavoring does with coffee creamer. 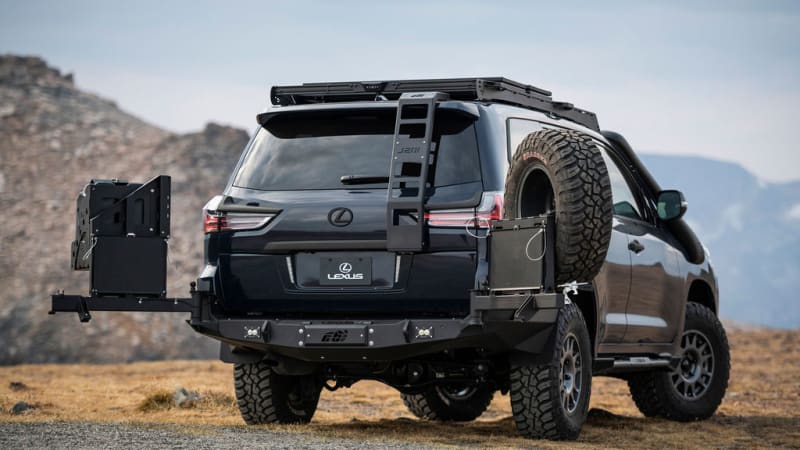 Strangely enough, the brand seems pretty serious about producing some version of a vehicle like this in the future. “I’m always a fan of crafting luxury vehicles that excite and that connect to a passionate audience,” says Shahani. “With J201, we’re emphasizing this SUV’s foundational identity. J201 hopefully gets the attention of people who didn’t realize the LX has always been a great means of luxurious adventure, or how it can be made that much more capable with a few mindful enhancements. J201 was developed to explore ways to meet the needs of our most adventurous guests. All I can say is, buckle up. The future is bright for Lexus.”