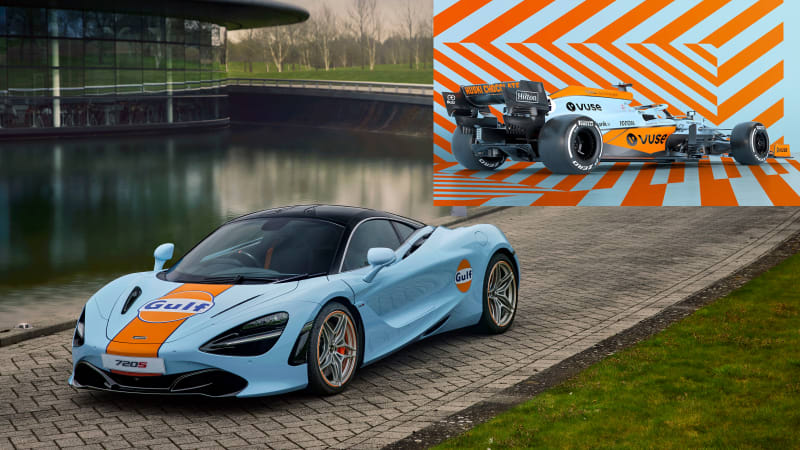 If you’re a Gulf livery fan, McLaren has your back this week. McLaren revealed a 720S Gulf livery creation, and a Gulf livery for its Formula One cars to run around in for the upcoming Monaco Grand Prix.

Starting with the road car, this Gulf livery is no sticker package. Mclaren’s MSO team spent 20 days painstakingly painting this design onto a 720S in an effort to make a callback to the McLaren F1 GTR raced by the Gulf GTC team. Both the blue and orange were perfectly matched, and the details are impressive. You’ll notice orange brake calipers, blue and orange interior stitching, Gulf logos on the headrests and side sills and an orange center stripe on the steering wheel with blue spokes.

McLaren worked directly with Gulf on this entire build, too, having just renewed the relationship between the companies last year — that deal makes Gulf the preferred oil and gasoline supplier for McLaren cars, and they’re filled with both from the factory. If you want a 720S that looks like this, McLaren says that “a limited number of customers will exclusively have the opportunity to have their McLaren supercars hand-painted by MSO in Gulf livery.” That means not many, so raise your hand if you want one.

As for the F1 cars, this Gulf livery is perhaps even more exciting. We never get to see the Gulf livery in F1, so McLaren’s one-off cars this year are going to be somewhat of a spectacle. Both Daniel Ricciardo and Lando Norris will race in this get-up while wearing matching racing suits and helmets. The cars look superb in photos, and we can’t wait to see them on track this coming weekend.

“This will be McLaren’s homage to Gulf’s celebrated race car design,” says McLaren Racing CEO Zak Brown. “We’re enormous fans of brave and bold design, and the striking Gulf blue is among the most loved liveries in racing, a celebrated piece of culture which transcends the world of motorsport.”