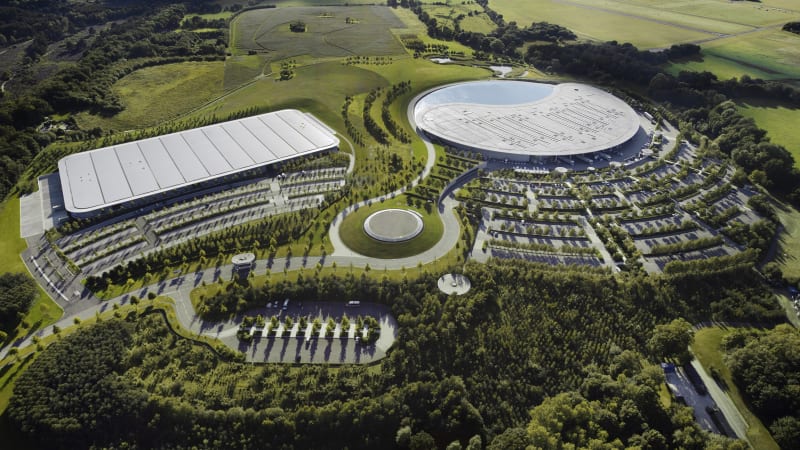 McLaren has found a buyer for its headquarters in Woking, England. It sold the facility to a New York-based investment firm named Global Net Lease, but it’s not planning on moving to a new home anytime soon.

Hit hard by the ongoing coronavirus pandemic, the British firm put a “for sale” sign on its lawn in September 2020 with a major catch: The new owner would need to lease the facility back to McLaren in the foreseeable future. Canadian real estate firm Colliers listed the carmaker’s headquarters at £200 million (around $256 million at the time), and Global Net Lease announced it haggled the price down to £170 million, which represents about $236 million.

The deal includes the McLaren Technology Center, the McLaren Production Center (which manufactures road cars, like the GT), and the McLaren Thought Leadership Center. Parking lots and a small man-made lake are part of the transaction, too. Moving everything to a new location would be immensely expensive, not to mention time-consuming, so McLaren will lease the 840,000-square-foot site from Global Net Lease for the next 20 years. What happens after that isn’t known yet; McLaren will presumably either sign another multi-year lease or buy the site back.

This is the second time McLaren has received a nine-digit cash injection in less than a year. In June 2020, it arranged a £150 million round of financing from the National Bank of Bahrain. At the time, it said the funding would allow it to get through the coronavirus crisis while putting it in the best possible position to be competitive in the future.

McLaren’s sale of its headquarters isn’t unprecedented in automotive history. In 2012, PSA Peugeot-Citroën (which is now part of Stellantis) sold its historic headquarters on Avenue de la Grande Armée in the heart of Paris for about $327 million to raise much-needed cash; it still leases the building in 2021. And, in January 2004, troubled British carmaker MG Rover sold most of its Longbridge, England, site to a property developer with plans to rent it. It signed a 35-year contract, and it optimistically added a renewal clause, but it shut down in April 2005 after years of losses.