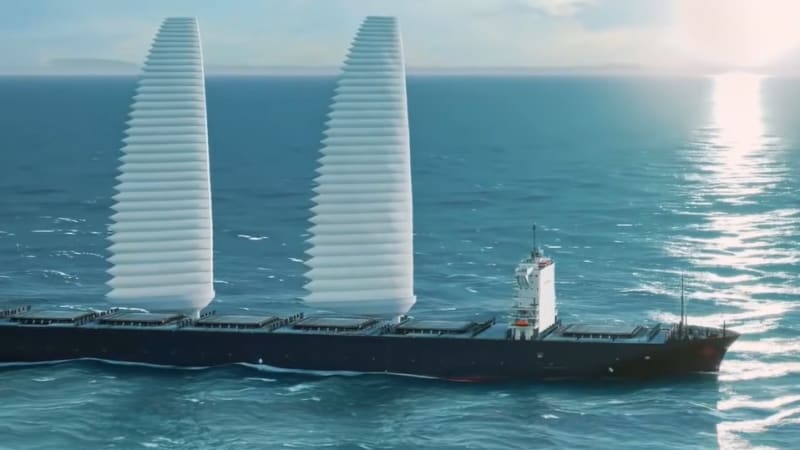 Swiss inventors helped the French tire manufacturer develop the sails. Computer-generated images released by Michelin show a pair of sails whose shape echoes the Bibendum mascot used for decades. They can be installed on most merchant and pleasure ships, either as original equipment for new builds or as a retrofit for existing boats.

Bulk carriers and oil tankers are among the types of ships that can be equipped with the WISAMO system. It’s a relatively straightforward technology. When there’s no wind, or when there’s a low bridge, the sails are neatly folded and stored above the deck. When the wind picks up, they deploy at the push of a button thanks to a telescopic mast and an air compressor; there’s no need to pull ropes, which is good because it would be hard to find crew members who can handle rigging on a sailing ship. The sails reduce fuel use, but they’re not designed to power boats on their own.

Fitting sails can reduce a ship’s fuel consumption by 10% to 20%, early estimates suggest. While sails have been around for millennia, Michelin’s take on the concept is inspired by airplane wings, so it has a double surface. Its performance is consequently much better than a traditional sail’s, according to Michelin engineer Bruno Fragniere.

Michelin expects to begin testing the WISAMO system on a merchant ship in 2022. The sails will enter production at the end of the trial phase if everything goes according to plan. It’s too early to tell who will inaugurate the system.

Other manufacturers from outside of the boating industry have experimented with sails in recent years. Paris-based carmaker Renault linked arms with Neoline to add sails to cargo ships in 2018, though the technology looked more like traditional sails than what Michelin has unveiled. At the time, it planned to start testing the sails in 2021 or 2022.