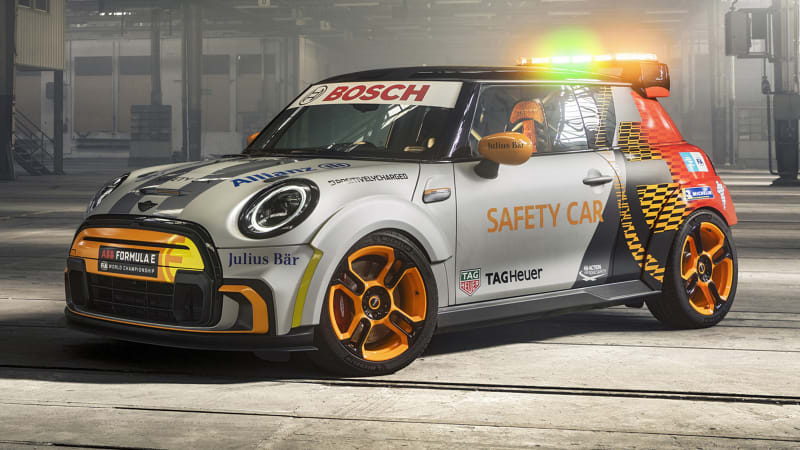 Just a few days ago, Mini teased a wild electric hatchback with pace car-style lights. And just as we expected, it’s the new safety car for Formula E. It’s called the Mini Electric Pacesetter inspired by JCW, which is a mighty long name for such a little car. It looks like a blast, and although it’s not exactly a production car or the direct forebear of a car that will be offered, it does hint that there will be high-performance electric Minis.

Don’t just take it from us, take it from the man in charge of Mini, Bernd Körber: “But it does reveal one of the directions we could take with the electrification of the JCW brand. For me, the message is clear: Electrification and John Cooper Works are a good fit.”

Mini made some major modifications to the Pacesetter to get it ready to lead race cars. It weighs 287 pounds less than the Mini Cooper SE that it’s based on, giving it a total weight of 2,712 pounds. Much of that weight loss comes from the gutted interior, which now has a welded-in roll cage, race seats and six-point harnesses. While not particularly related to weight saving, the seats also have a neat 3D-printed material for the cushions that can be made in different colors and densities. The electric motor and battery are unchanged at 181 horsepower and 199 pound-feet of torque, but the weight loss means that it hits 62 mph in 6.7 seconds, an improvement of 0.6 over the road car.

Handling and braking are upgraded with racing coilovers that have adjustments for compression, rebound, camber and ride height, as well as four-piston brake calipers. Mini John Cooper Works GP forged four-spoke wheels are fitted with 245-mm Michelin Pilot Sport tires. The wider track from the wheels necessitated the unique 3D-printed carbon fiber fender flares. The rear wing, which is similar but not identical to the GP unit, is also made of 3D-printed carbon fiber material. Splitters, side skirts and a large rear diffuser round out the aerodynamic tweaks.

The car will make its racing debut at the Formula E event in Rome on April 10. And we hope we won’t have to wait too long for an electric John Cooper Works model to reach the public.