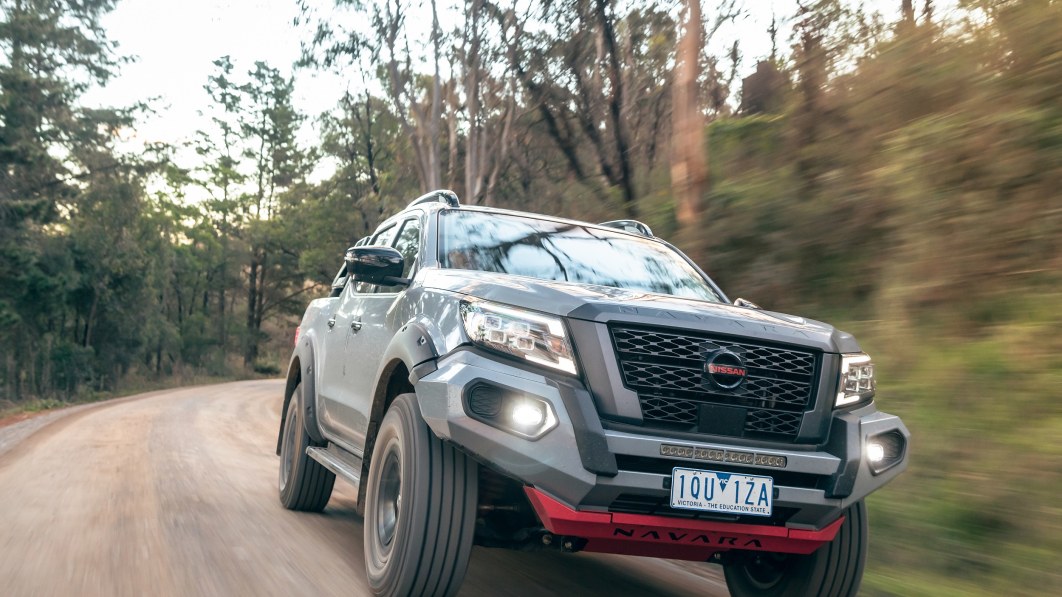 Ram became the first company to fire back at Ford’s line of Raptor-branded trucks when it released the mighty 1500 TRX in 2020. Nissan is the second. It’s leaving the F-150 alone and taking aim at the smaller, Ranger-based model sold overseas with a dune-hopping Navara built jointly by its Australian division and engineering firm Premcar.

Don’t be surprised if the Navara nameplate doesn’t ring a bell: Nissan has never sold the model in America. Overseas, the badge denotes a tough, go-anywhere truck that’s about the same size as our Frontier. Both trucks were very closely related until 2014, when the 10-year old model sold globally was replaced and our variant of the truck soldiered on — it’s still available in 2021. It’s the updated model Nissan is counting on to dethrone Ford.

Designed and built in Australia, the Warrior stands above the standard Navara with a specific front bumper that increases the approach angle, a beefy skid plate that protects the mechanical components, extra lighting, and what looks like a suspension lift. Nissan isn’t quite ready to reveal the full list of changes it made to the truck; its engineers are still working with Premcar’s to make the final round of tweaks, but it’s a build that looks promising.

“Twin Turbo” graphics on the doors suggest power comes from Nissan’s twin-turbocharged 2.3-liter diesel engine. It’s a four-cylinder that makes 190 horsepower and 332 pound-feet of torque in stock form, though Premcar might have upped those figures. It spins all four wheels, likely via an automatic transmission. In comparison, the Ranger Raptor sold overseas ships with a 2.0-liter turbodiesel with 213 horsepower and 368 pound-feet of torque on tap.

Pickup trucks are increasingly being purchased by motorists seeking a comfortable, daily-drivable SUV with a cargo box. Nissan is taking advantage of this trend by fitting the Warrior with a long list of features that includes an 8.0-inch touchscreen, leather upholstery, and forward-collision warning. The Warrior is hardcore, but it’s soft inside.

Full details about the Nissan Navara Pro-4X Warrior will emerge in the coming months, and sales in Australia will likely start before the end of the year. Nothing suggests the Warrior will reach our shores, where the standard Navara and its main rival aren’t sold, but it might inspire Nissan to give the new Frontier a similar treatment.