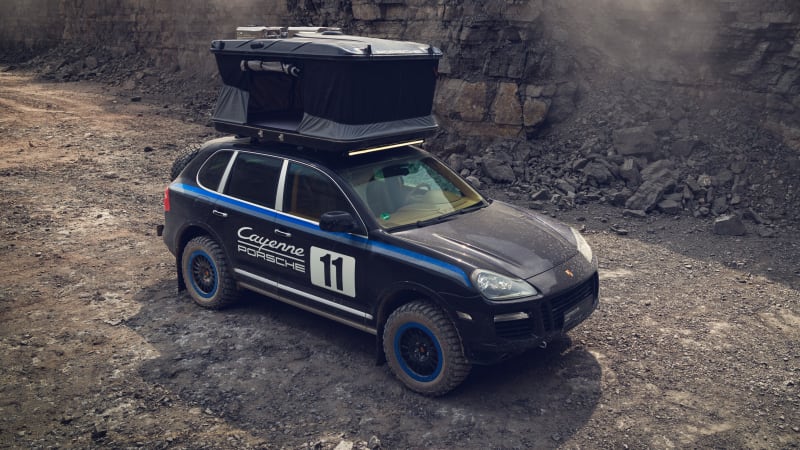 Released in Europe in 2002, the first-generation Cayenne (called 955 internally) is nearly old enough to join air-cooled 911s and the V8-powered 928 under the Porsche Classic umbrella. The firm’s in-house classic car specialist is prepared to welcome the Cayenne with a pair of outdoorsy concepts that will strike a chord with enthusiasts.

Adding the 955-generation Cayenne to the Porsche Classic lineup means a broader range of factory-built spare parts will be available to owners driving one daily — and, sooner or later, to those restoring one. Porsche also wants to offer factory-backed upgrades, like a modern infotainment system and a rugged-looking off-road package. The two prototypes it built illustrate some of the non-stock parts it could make available for the original Cayenne.

Both design studies look ready to explore some of the most grueling terrain on the planet. Based on post-facelift models, they’re fitted with alloy wheels wrapped by meaty tires, skid plates, a roof rack loaded with accessories, and extra lights. Porsche didn’t publish photos of the interior, but it told us the experimental SUVs gain floor mats and a tray in the luggage compartment, among other add-ons. Mechanical changes are not part of the transformation.

While the Cayenne will inevitably fall under the stewardship of Porsche’s Classic division, executives haven’t decided precisely which upgrades they’ll make available for the SUV. Bringing the two prototypes to off-road-focused events taking place in Europe this summer will help them decide by gathering feedback from enthusiasts. One of the duo’s stops will be at the Abenteuer & Allrad show taking place in Germany on July 29.

Full and final details about Porsche Classic’s program for the first-generation Cayenne will be announced in the coming months. It will be interesting to watch the effect that factory attention has on the SUV’s value.

What about other Porsche models?

Porsche is also developing a performance chassis upgrade for the 996-generation 911 (1997-2006) and, surprisingly, for the limited-edition 959, which was one of the best supercars of the 1980s. Depending on the type of Porsche in your garage, you won’t need to wait until it’s considered a classic to modify it with factory-backed parts.

The company teamed up with partner Manthey-Racing to create a Performance Kit for the 991-generation 911 GT2 RS (pictured above) that adds a body kit, a coilover suspension system, specific brake parts, and magnesium wheels. This package has already been approved for production, and sales will start this month. Porsche notes that additional parts (including racing brake pads and a 3D-printed seat) will join the catalog a little bit later.