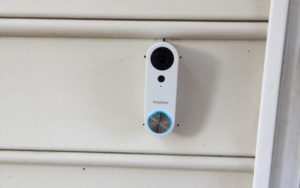 If you’re comfortable with using a screwdriver and you know how to work your circuit breaker, installing the SimpliSafe Doorbell Camera is pretty straightforward.

I was a little intimidated by the process, but I realized it was ike cooking using an unfamiliar recipe: I might not be able to throw it together as quickly or easily as an experienced chef, but as long as I follow the instructions and take it one step at a time, the outcome is the same.

I did run into some installation snags, though. After getting everything hooked up and restoring power to the circuit, the doorbell wouldn’t ring when I pressed the button. After troubleshooting with some SimpliSafe installation videos on YouTube, I learned that sometimes it just takes a few minutes before the doorbell starts working.

Once the doorbell was installed and functional, it took only about two minutes to get it linked to my Wi-Fi network and the SimpliSafe app so I could access the camera and its settings from my smartphone.