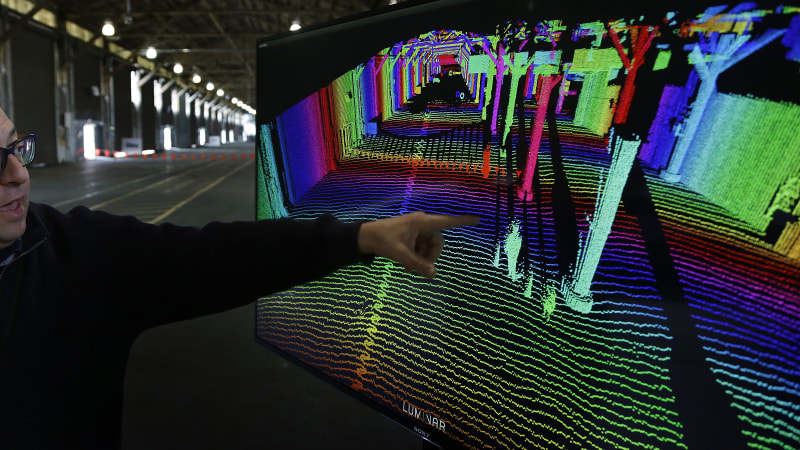 Tesla, whose boss Elon Musk says he can develop a fully self-driving car without using laser-sensor technology, has a contract to use such sensors from Luminar Technologies for testing and development, according to people familiar with the matter.

A photo of a Tesla Model Y with a roof rack of lidar sensors posted to Twitter on Thursday stoked speculation that the companies were working together, sending Orlando, Florida-based Luminar’s shares up more than 10% that day. While similar images of Teslas with lidar sensors have popped up before on social media, it was unclear until now what the relationship is between Tesla and Luminar.

Luminar sold Tesla the sensors on that Model Y as part of an agreement between the companies, some of the people said, requesting anonymity because the information is private. In addition, Bloomberg News confirmed with the California Department of Motor Vehicles that the manufacturer’s license plate on the photographed vehicle belongs to Tesla. The same manufacturer’s plate has been spotted on other Tesla vehicles, including a prototype of the forthcoming Cybertruck.

The Model Y with the sensors was spotted in Palm Beach, Florida, around 8 a.m. Thursday by Grayson Brulte, a consultant to the autonomous-vehicle industry who lives in the area. The photos he posted to Twitter fanned market speculation that Chief Executive Officer Musk might be hedging his claim that he can develop a camera-only self-driving system, without the radar and laser sensors embraced by competitors.

Luminar’s shares pared a gain of as much as 9.8% to trade up 4.7% to $22.42 as of 9:44 a.m. in New York. The stock had surged on May 20 to the highest level in more than three weeks and its ticker symbol, LAZR, was shared widely on Twitter in speculation that it had supplied the sensor suite.

It’s not clear what Tesla’s intentions are with Luminar’s lidar, the people familiar with the matter told Bloomberg. Tesla engineers could be benchmarking their camera-centric self-driving system against lidar; they also could be testing lidar for future use.

Any suggestion that Musk would change course to adopt lidar is unrealistic, said Sam Abuelsamid, an analyst with Guidehouse Insights.

“The more likely scenario is they are using the Luminar lidars to validate their camera-based FSD system,” Abuelsamid said in an interview, using an acronym for full self-driving. “If they made that change, it would effectively deprecate their entire fleet of vehicles. They are not going to retrofit one million vehicles.”

Lidar, which stands for light detection and ranging, is a key technology for the world’s leading automakers, tech companies and startups as they race to make fully autonomous cars a reality. Lidar uses lasers to build a three-dimensional image of the surrounding landscape, which is critical to how the vehicle perceives the environment, predicts the behavior of pedestrians and other vehicles, and plans how to safely navigate roads.

Musk has been a lone, and loud, voice saying that lidar isn’t necessary.

“Lidar is a fool’s errand,” he said during Tesla’s “Autonomy Day” for investors in April 2019. “Anyone relying on lidar is doomed.”

More recently, Musk has softened some of his public comments on lidar technology. In an appearance on the audio chatroom Clubhouse earlier this year, he admitted to “talking smack” about lidar and said that SpaceX — the rocket company Musk also leads — developed its own internal lidar to aid the SpaceX Dragon capsule. “Obviously if I hated lidar I wouldn’t have done that,” Musk said. “However, for driving on real world roads you have to solve vision, understanding objects.”

On an earnings call last month, Musk suggested Tesla is also moving away from radar, which, along with lidar and cameras, is one of the three technologies the industry has viewed as critical sensor hardware needed to reach a future of self-driving vehicles.

Analyst Adam Jonas of Morgan Stanley called that a bold and risky move. Jeff Osborne of Cowen & Co. went a bit further: “We continue to question Tesla’s approach to vehicle automation,” he wrote in a note to clients. “In our view this is unlikely to succeed.”

Tesla shares were little changed at $581.12 in early trading Monday. As of the close Friday, the stock was down 18% this year.