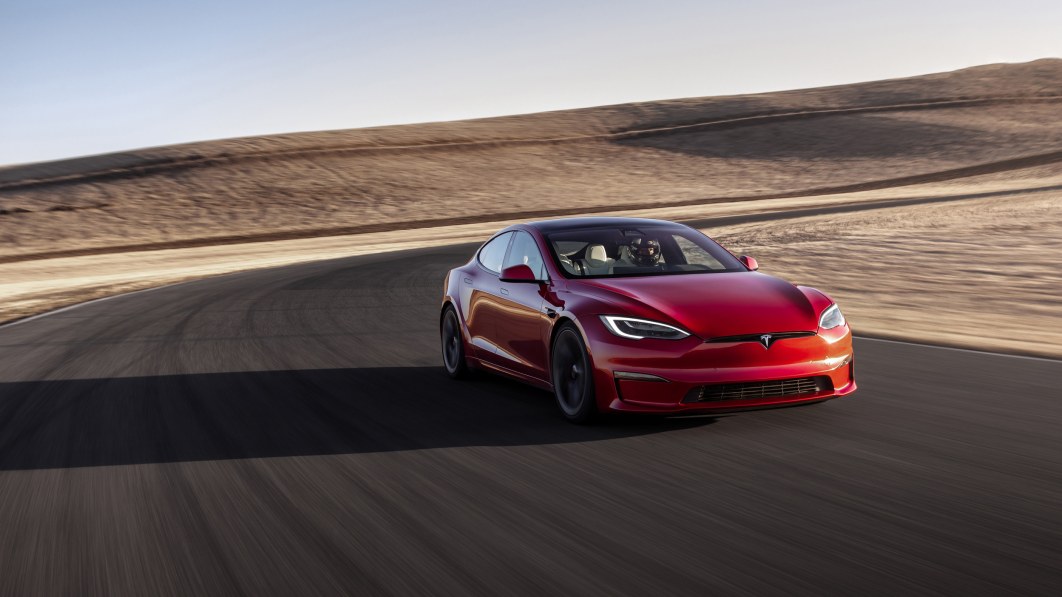 Upon revealing the Model S Plaid to the world, Tesla CEO Elon Musk claimed that, among its other impressive specs, it is the only production car with a sub-2.0-second 0-60 time. That claim alone raised a lot of eyebrows, especially among those of us who evaluate cars for a living. Tesla’s lack of cooperation with media outlets is fairly universal, and getting ahold of its products for evaluation is virtually impossible, but Motor Trend was able to negotiate some time behind the wheel of a Model S Plaid, and even got Tesla to agree to instrumented testing … under certain conditions. Tesla’s conditions.

Tesla insisted that MT‘s acceleration testing be done on surfaces prepped with VHT, also known as TrackBite or some variant of the term “traction compound.” In short, it’s the sticky resin used to treat drag strip boxes to improve launch grip. This is not how MT performs its normal testing, which sparked a whole new round of discussions. Here it is, straight from the source:

“During planning, Tesla requested that we not use our normal facility. After much back and forth, we offered to secure use of an automotive proving ground where we conduct Of The Year testing. Tesla then told us we could accept its offer of hosting us at Famoso Raceway near Bakersfield, California, or we could forget the whole thing. We accepted.”

Solid start, right? Well, it didn’t play out that way. Tesla threw them a curveball at the last possible second:

“Then, at the track on test day, Tesla informed us it would require our driver to launch the car only on the VHT-prepped surface. But after further on-site negotiations and a backward pre-run by Tesla’s own test driver, we came to an agreement: We could conduct runs in each direction, on both the Tesla-requested VHT and, per our normal procedure, on regular asphalt. As we were preparing to run our tests, the Plaid’s handlers received a phone call, and suddenly our options were once again to launch only on the VHT-prepped surface — or leave.”

“After our own internal discussions, we chose a third option: We agreed to Tesla’s conditions at Famoso and made plans to head to our Fontana test track the following day to see how quick the Model S Plaid would be when tested under the same conditions we’ve used to safely and effectively evaluate everything from economy cars to the world’s fastest hypercars.”

As a quick recap, here’s what Musk claimed the Plaid had going for it when it was revealed earlier this month:

On the prepped surface, the Plaid delivered. It hit 60 in just 1.98 seconds – not quite as quick as Musk boasted, but still fast enough to sneak in under the 2.0-second mark – and ran the quarter in 9.25 at 152.6. Their follow-up testing on an untreated surface resulted in a still-astonishing 0-60 time of 2.07 seconds. Quarter-mile testing couldn’t be done due to the short notice, as the facility did not have the proper safety precautions in place for the speeds expected.

While the Model S Plaid didn’t quite live up to Musk’s claims, it’s by no means far off the mark. Tesla’s aggressive marketing puts a burden on its products not felt by the likes of other high-speed heroes like the 911 Turbo, which Porsche typically rates far more conservatively than its real-world performance. This flip of the script might seem like a miss to traditional car enthusiasts, but Tesla fans obviously don’t care.

Motor Trend gets into quite a bit more depth with the Model S Plaid, and their evaluation is well worth the time necessary to completely absorb. Check it out here.