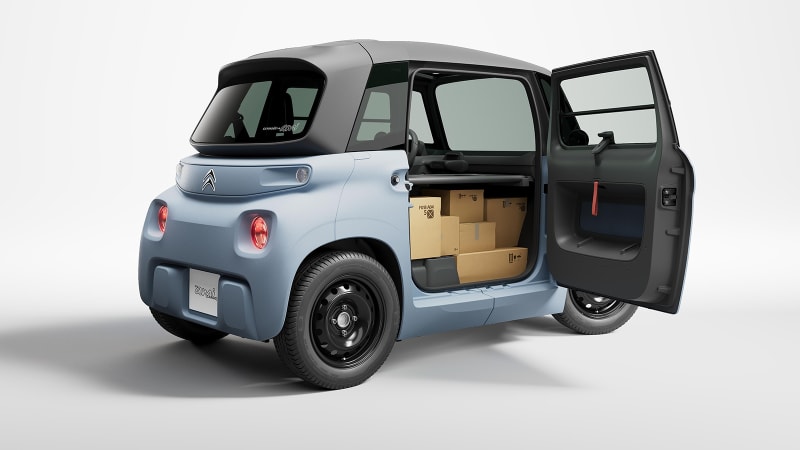 There are some cars in this world that make a lot of sense to turn into cargo vehicles, such as vans. Then, there’s the Citroën Ami. It’s a minuscule two-seat commuter that’s not quite 8 feet long and can’t even go 30 mph. But that hasn’t stopped the French automaker from turning the tiny EV into the My Ami Cargo cargo hauler for urbanites.

With such tight accommodations, the only real way to get more space was to ditch the passenger seat, leaving only the driver’s. Now in the space where there used to be a seat is a plastic bin of sorts that allows for stowing cargo up to about where the driver would have an armrest.

At this height, there’s a plastic cover to hide items as well as to function as a shelf or a desk. Citroën shaped it to have space to place paper documents or electronic tablets. The shelf is double-hinged, too, so the driver can easily reach down into the area to grab something, or it can be flipped up for access from the former passenger door. Furthermore, the cover can be removed entirely and stowed behind the driver seat to allow for taller items.

The My Ami Cargo’s driving performance is unchanged, and it’s really only suitable for low-speed travel in cities. As previously mentioned, it has a top speed of just 28 mph, courtesy of an 8-horsepower motor. Range is just over 46 miles, though it will recharge in three hours on a 220-volt household outlet.

The little electric cargo mover will go on sale in Europe with a price tag of €6,490, or just shy of $7,800 at current conversion rates. That’s a €400 premium over the standard two-seat model. It can also be leased with a monthly payment of €24.28 a month. We don’t expect it to come to the United States, but it wouldn’t be impossible, as it seems some standard models may appear through the Stellantis-owned car-sharing program Free2Move.