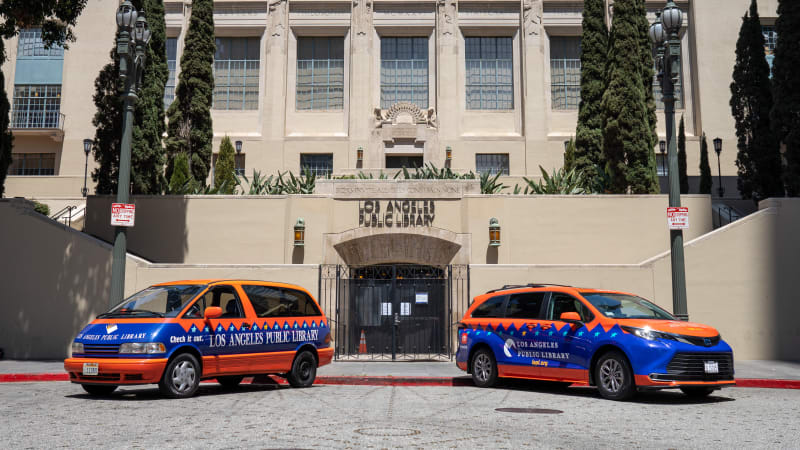 Since 1994, the Los Angeles Public Library system has used a hideously colored Toyota Previa minivan to shuttle staff and books around the sprawling metropolitan region. The LAPL system retired it last year, and Toyota has stepped into to fill the void by donating a 2021 Sienna in the same livery.

The Previa served the library system faithfully for 26 years, painted in the LAPL’s retina-searing orange, blue and turquoise scheme (yes, that’s what your library card looks like, too, if you live in Los Angeles). It helped staff implement programs for youth literacy and new mothers. As part of its “Read, Baby, Read!” initiative, the van brought reading kits to hospitals, health clinics and daycares.

“Our 1994 Previa served our community well and we logged thousands of miles traveling to and from our neighborhood libraries over the past 26 years,” said Madeline J. Bryant, principal librarian of the Youth Services Department, Engagement and Learning Division. It looks like it even sacrificed a hubcap (or three) in the process.

The 2021 Sienna appears to be an XLE spec, which starts at $39,750 and means Toyota didn’t cheap out with the LE. It also means it’ll get 36 miles per gallon in the city and 36 highway mpg, a significant bump over the Previa’s listed 18 city and 23 highway rating.

Obviously, the Sienna packs a lot more safety equipment like airbags and structural strengthening between its walls, which will cut down on interior volume. It also has rear sliding doors on both sides, whereas the Previa only had one, on the passenger side.

If anyone wants to buy an insanely colored Previa, you know who to call.