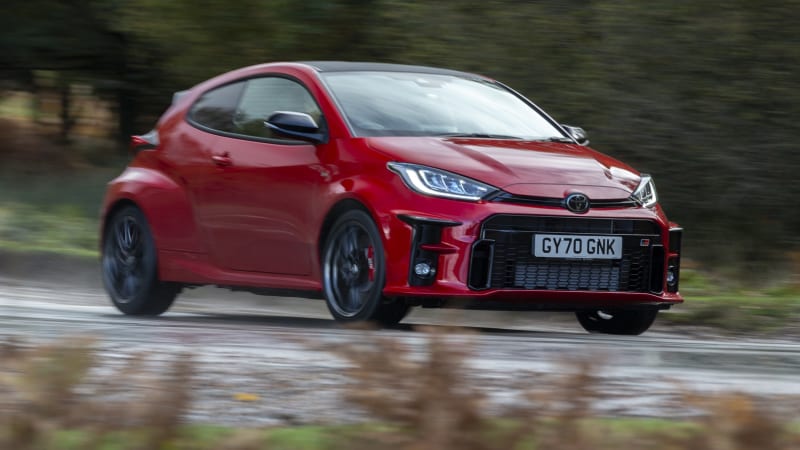 Rumors surrounding Toyota’s upcoming Corolla-based hot hatch are getting louder on a monthly basis. While the model hasn’t been officially announced yet, the latest round of reports claims it will be more powerful than expected.

As we previously reported, most sources agree the GR Corolla — which will be positioned above the rally-bred GR Yaris in Toyota’s hot hatch pecking order — will eschew hybrid technology and instead receive its smaller sibling’s power-dense three-cylinder engine. It will be tuned to develop at least 300 horsepower, according to Japanese publication CarSensor, an increase of more than 32 horses over the GR Yaris. That’s a surprisingly high amount of power to squeeze out of a turbocharged, 1.6-liter triple, and it’s much more than the output quoted by earlier reports.

Toyota will bolt the three-cylinder to a six-speed manual transmission that will spin the four wheels via a center differential with a multi-plate clutch. Like in the Yaris (pictured), the front-rear torque split will vary depending on the driving mode selected. The default split is 60/40 front/rear; Sport changes it to 30/70, while Track locks it at 50/50.

At launch, only the four-door hatchback variant of the Corolla will receive the GR treatment, so enthusiasts waiting for a hot-rodded sedan will be disappointed. Visual modifications will include wider wheels tucked under punched-out arches, a larger front air dam that will bring the Corolla in line with the Yaris, and a roof-mounted spoiler.

Interestingly, CarSensor added a wagon will join the GR Corolla range a little later in the production run. It will be based on the Corolla wagon that’s sold in numerous global market, and that might will appear in the United States sooner or later, but it will swap the tightly-wound three-cylinder for a gasoline-electric hybrid powertrain built around a 2.0-liter four-cylinder engine. Specifications (including horsepower and transmission options) aren’t available.

Toyota has strongly hinted it will introduce a quicker version of the Corolla to the American market, but it has always stopped short of confirming the GR is on its way. If the rumor is accurate, we could see the GR Corolla in the metal in the next year, and it will likely arrive in showrooms in early 2022 as a 2023 model. Pricing will start at about four million yen in Japan, a figure that corresponds to approximately $37,000 at the current conversion rate.