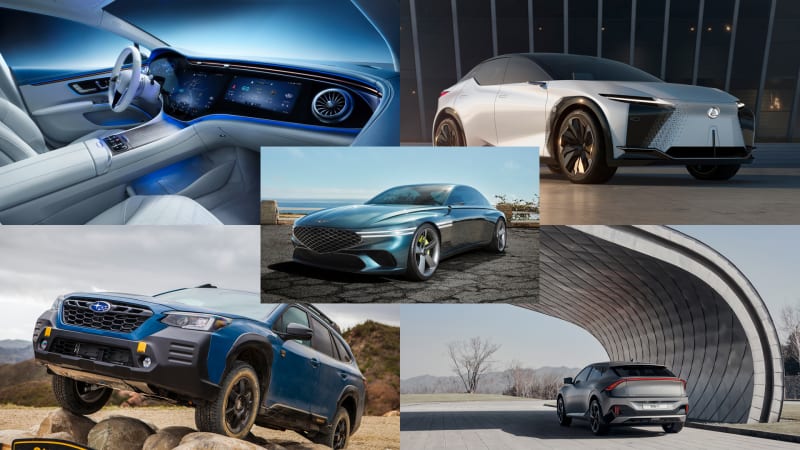 In just about any other year, this week would have been the New York International Auto Show. While we didn’t travel to the Big Apple for days of glad-handing and ill-conceived introductory gimmicks, we did get a reasonably large sample of new and conceptual cars to pore over this week. Here are the highlights.

Mini’s Electric Pacesetter weighs 287 pounds less than the Mini Cooper SE that it’s based on, giving it a total weight of 2,712 pounds. Much of that weight loss comes from the gutted interior, which now has a welded-in roll cage, race seats and six-point harnesses. While not particularly related to weight saving, the seats also have a neat 3D-printed material for the cushions that can be made in different colors and densities. The electric motor and battery are unchanged at 181 horsepower and 199 pound-feet of torque, but the weight loss means that it hits 62 mph in 6.7 seconds, an improvement of 0.6 over the road car.

Hyundai revealed what appears to be a production-intent version of its forthcoming Santa Cruz not-quite-a-pickup. We can see that it’s quite obviously a small truck with a short bed and what looks like a roomy cabin. Just like the Honda Ridgeline, the Santa Cruz will be built on a unibody platform, but based on its size, it looks like more of a compact Ford Maverick competitor than a mid-size truck.

Land Rover is fending off a growing list of rivals by taking the Range Rover, its flagship model, even further upmarket with these new SVAutobiography Ultimate editions, which gain a specific two-tone look, a long list of luxurious interior features, and a price tag that makes Maybach’s first series-produced SUV look like a bargain. Buyers can choose whether they want to spoil their passengers with a long-wheelbase Ultimate or enjoy the drive with a short-wheelbase Dynamic model. Both are finished in a newly-developed color called Orchard Green with contrasting Narvik Black paint on the roof and on the door mirrors plus a sprinkling of copper-colored accents.

Genesis had almost nothing to say about actual specifications for this sexy concept coupe but we don’t especially care, because, well, look at it. The coupe has a surprisingly traditional shape with distinct hood, cabin and trunk sections, but they stand out in a world full of fastbacks and crossovers. The proportions are also traditional, but in a timeless manner with a long, low hood and pert tail. Adding athleticism to the shape are the bulging fenders and the forward-leaning grille. The split headlights squint and scowl, and they dramatically sweep into the front fenders. The taillights do the same, but in reverse, and the tail is comparatively conservative, but fitting with the elegant, classic shape of the X.

The parade of new electric vehicles continues with the 2022 Kia EV6, a crossover-ish vehicle with surprisingly aggressive performance numbers. Although we have previously seen the EV6, today we get new pictures and key specs, including a maximum range of 316 miles on the WLTP combined cycle (EPA range would be less), a 0-60 time as quick as 3.5 seconds in the EV6 GT model, and a recharge from 10% to 80% in just 18 minutes thanks to the 800-volt charging capability on every version.

Beyond just a trim level, the Outback Wilderness is the first offering in a new Subaru sub-brand. It will be to overlanders and van-lifers what STI is to canyon-carving speed demons. Right away, it’s apparent that the Wilderness is more rugged than a standard-issue Outback but, crucially, it’s much more than an appearance package.