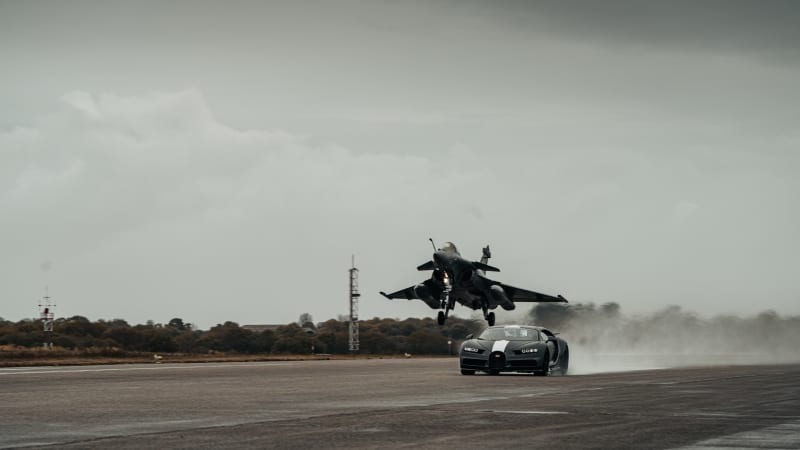 Bugatti is done chasing speed records, but it’s finding other ways to demonstrate what the Chiron’s mighty W16 engine is capable of. It brought a Sport model to a naval base in France and put it head-to-head against a jet.

On paper, the comparison is hardly fair. Driven by Pierre-Henri Raphanel, a former pilot who is now Bugatti’s official driver, the Chiron Sport is powered by a quad-turbocharged engine rated at 1,500 horsepower. Made by Dassault, the Rafale jet boasts about 5,700 horsepower, though its dry weight checks in at around 22,700 pounds.

And yet, after the flag drops, the Chiron races ahead of the Rafale for the first few hundred yards. Its lead doesn’t last long; Raphanel explained the Rafale quickly caught up and took off. Looking at the plane’s specifications sheet reveals it begins to leave the ground at 161 mph after sprinting for approximately 450 yards. Once it’s airborne, it’s gone. It’s capable of reaching the speed of sound (Mach 1.6; 1,227 mph). Even with 16 cylinders, the Chiron isn’t quite that fast; test driver Andy Wallace set a land speed record in 2019 by driving a longtail model to 304.7 mph.

Slowing down both machines is easier said than done. The runway the Chiron and the Rafale raced on was relatively short, so Raphanel began braking at over 217 mph after accelerating for about a mile. The air brake integrated into the rear end helps scrub off speed without undue drama. Landing the Rafale safely requires a complex system that includes 10 pistons, a special anti-skid system, heat shields to protect the wheels, and nitrogen-filled tires. It approaches the runway at about 155 mph and comes to a full stop in around 150 yards.

Bugatti brought the recently-introduced Les Légendes du Ciel version of the Chiron to the race. It’s a limited-edition model that highlights the little-known link between some of the firm’s earliest race cars and aviation with special graphics and specific trim pieces, among other details. While it initially looks like the sketch of a plane on the door panel is all that joins the Rafale and the Chiron, the connection is a little deeper: the jet’s brakes were developed by Messier-Bugatti, a company now known as Safran Landing Systems that shares common roots with the carmaker.