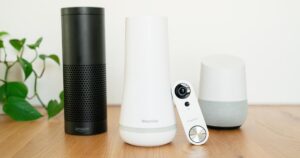 We’ve already talked about arming and disarming, but there are a few other things you can do with the SimpliSafe app:

The app is missing some features. For example, SimpliSafe’s doorbell camera technically has person detection, but the app doesn’t tell you when a person is detected. It only says “motion” on the alert, which makes person detection like every other motion alert. It does tell you when the doorbell is rung instead of just alerting you that it detects motion though, so at least you know when someone wants you to come to the door.

We also wish it had built-in AI like the Vivint app to sense when you’re home and automatically adjust your thermostat and turn lights on and off.

The SimpliSafe app doesn’t work with any thermostats or smart bulbs. And while you can arm the system using Alexa or Google smart speakers, that’s it. In fact, it has very few smart home integrations overall. Too bare bones for us.