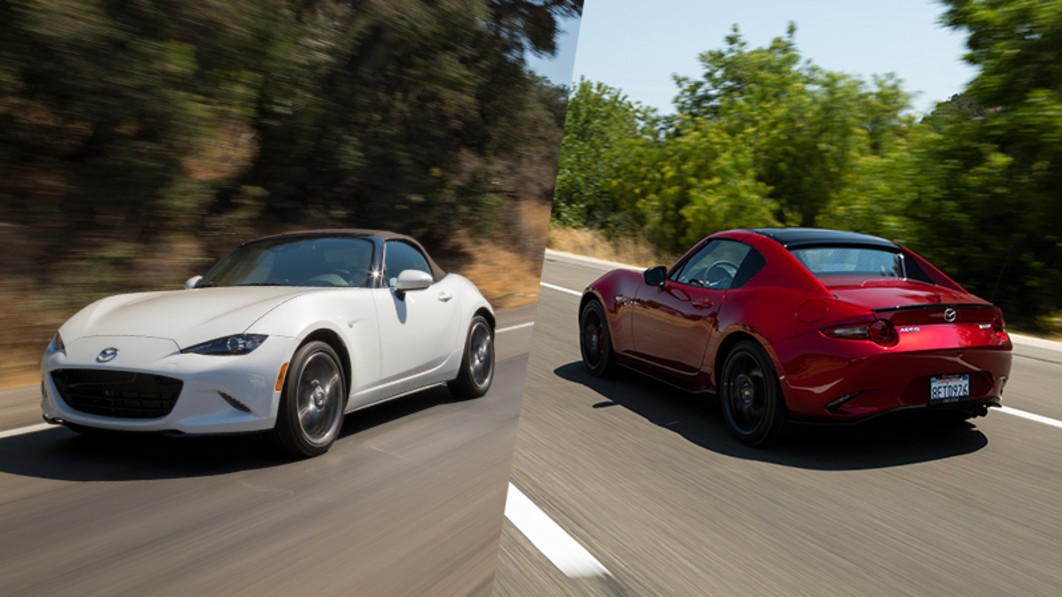 I recently spent time in a 2021 MX-5 Mazda Miata RF — you know, the one with the retractable hardtop. With the top up, it cuts a nice figure — sleek and aggressive, making plain the car’s sporting intentions. And yes, I loved it. It confirmed, yet again, my long-held opinion that I should own one someday.

But, as much as I love the look of the RF, that’s not the Miata I would buy. I love the MX-5’s soft top. I love how quickly I can drop it or pop it back up even while sitting in the driver’s seat. I like the fact that even with the top up, it looks like the convertible it is. I also appreciate its simplicity and its added headroom. While the hardtop is quieter when closed up, the soft top is quieter with the top down (which is how it should be driven). The ragtop is also lighter, which should at least have a placebo effect when tossing this thing down dynamic roads.

Finally, the soft top versions are cheaper. The Sport trim starts at $27,825 (including $995 in destination fees). The Miata RF doesn’t even offer a base Sport trim — which is probably the one I’d get — but starts at Club with an MSRP of $34,040. That’s a $2,755 premium over the soft-top Club. While the manual-equipped Club also includes a limited-slip differential that the Sport trim does not, I don’t know if that feature is enough to make me upgrade.

That said, there are some real advantages to the RF’s hardtop. Like I said earlier, it’s quieter when closed. It’s also easier to find a comfortable temperature with the tin can sealed up — the soft top is hotter in the summer, and colder in the winter. And in addition to looking super sharp with the hard top closed, it also provides more security. I suspect, though, that someone with the will to slash the top probably wouldn’t mind breaking a window, but on the other hand, a window is cheaper to replace.

Say you’re buying a current-generation Mazda MX-5 Miata. Which top do you get?

So, I ask you, dear readers, which roof would you choose for the current-generation Miata? I’ve placed this poll on Twitter, but you can also feel free to sound off in the comments for more nuanced answers, or anecdotes about your own MX-5.