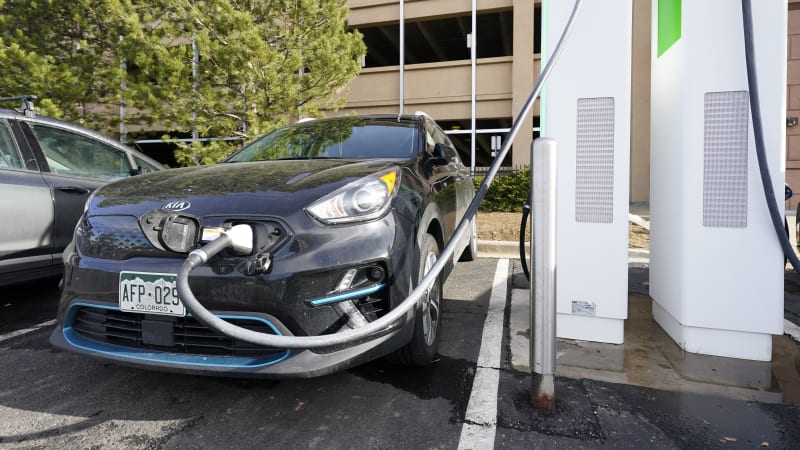 “Fill her up … with 20 kilowatt hours of premium charge.”

At some point in the future, that sentence might be something an electric vehicle (EV) owner may say at a gas station — or rather, a “service station.” For those following the hot EV trade on Wall Street, you’d think in 5 years every car would be electric, and that owning a gas or internal combustion engine (ICE) vehicle would be like owning a horse. Tesla’s (TSLA) CEO Elon Musk certainly thinks that’s the case.

While EVs are the future, old-fashioned, gas-powered cars and trucks will be with us for a long time. BNEF predicts 4 million EVs will be delivered annually by 2030, representing just a quarter of all vehicles sold in the U.S.

To be sure, electric cars are coming, and an infrastructure buildout appears poised to happen. But what about all those reliable, ubiquitous gas stations, and their yeoman-like attendants?

There are literally thousands across the country, strategically located throughout U.S. interstate roads and highways. For many gas station owners and their workers, the concern is whether Americans say goodbye to filling up, and hello to plugging in at home.

One potential solution is a hybrid gas station, which would include EV chargers on the same premises as the traditional gas pumps. While the idea is sound in theory, science and economics are getting in the way.

Current constraints on charging, battery technology, and infrastructure mean “fast charging” isn’t quite fast enough. Some cars like the Porsche Taycan can get 60 miles of range in 4 minutes, and 80% range in 15 minutes; however, these are only at 800 volt, 350-kW fast chargers — which are rare, and can be very costly to use. According to EV charging service, most fast chargers offer 80% range in double the time (or 30 minutes).

Then there’s the matter of dollars and cents. When asked about why you don’t see EV chargers at traditional gas stations, Phillips 66 U.S. chief economist Horace Hobbs said charging at one of the company’s gas stations would be “awfully expensive” for the consumer, versus charging at home.

Furthermore, the investment for installing these chargers at the 7,000 retail gas stations that Phillips 66 (PSX) operates would necessitate fleet operators use those charging stations. “There’s not a fleet out there today to keep the chargers running at a rate that would support economically” putting chargers in at their gas stations, Hobbs said.

So the economics don’t work, and neither do the politics and optics. In Sonoma, California, an organization called CONGAS (Coalition Opposing New Gas Stations) is fighting against fossil fuel mainstays, and locales nearby are also answering the call to arms.

“Since we started CONGAS, I’ve been hearing from people all over the state that want to do similar [initiatives], and that are concerned about new gas stations,” Woody Hastings, head of CONGAS told Yahoo Finance recently.

While California is one story, the rest of the nation is quite another. Gasbuddy’s Patrick DeHaan believes adopting EV charging stations is an issue of both money and scale.

“You’re taking away infrastructure from internal combustion vehicles potentially, and giving it to something that has less of a market share, because the overall number of EVs outside California at least is very limited,” he said.

“I think a lot of stations right now are adapting very slowly, because I don’t think the numbers are quite there yet,” DeHaan added. “There’s a little bit of an infrastructure [problem], and there’s a big cost.”

FreeWire, a fast charging provider, says the biggest problem is infrastructure. The organization argues that utilities just can’t provide the power needs for modern EV’s, which require 3 to 4 times the power output that utilities can provide at the moment.

“If you’re pulling up to a 7-11 or Starbucks, they simply don’t have the utility infrastructure there available to fast charge not just 2 or 3 vehicles, but even one vehicle,” FreeWire CEO Arcady Sosinov said in an interview earlier this week on Yahoo Finance Live.

Convenience is the name of the game

So where does that leave the traditional gas station? Can it adapt in a world that is slowly evolving to electric, while remaining both relevant and environmentally friendly?

Dehaan sees the gas stations as pivoting more towards convenience — with a very slow adoption to EV charging given the constraints.

“We all still call them gas stations, but almost all of them have some sort of mini-mart store where we can go conveniently,” he explained. “A lot of gas stations now have fresh offerings – fresh produce, milk, eggs – they’re becoming more of a kind of grocery store than they are a gas station, and I would expect that evolution to continue… as this EV transformation is happening.”

So instead of asking for a 20 kilowatt hours charge at the service station of the future, drivers may well ask for a dozen eggs and a carton of milk instead. That’s at least until charging tech, and the heavy investments in charging infrastructure, have more time to catch up with those millions of new EVs hitting the road in the coming years.